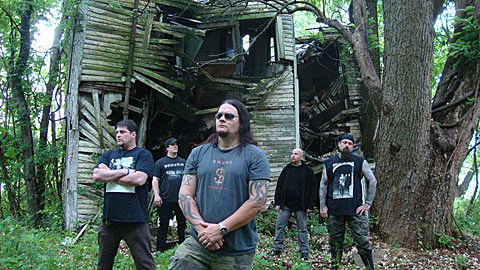 The NYC area is rich with veterans of the hardcore and metal scenes, but not quite as fertile with people who have done time in both. Daryl Kahan is one of those. Equally as likely to be found in an SSD shirt as he is to be seen in a Demigod one, Daryl's past is littered with multiple hardcore, blackened, and death metal bands that bear names like Funebrarum, Citizens Arrest, and Abazagorath. One weekend, Maryland Deathfest 2011, called for Kahan to hit the stage with both the blasting hardcore of Citizens Arrest and the unholy death metal of the reactivated Funebrarum. Kahan is an example that the word extreme isn't limited to any one scene.

Daryl's new project, the bulldozing death-metal machine Disma, recently released their latest LP Towards The Megalith and are preparing for their record release party with Coffinworm, Unearthly Trance, and Oak (at Saint Vitus on 8/6, tickets).

I sat down with Daryl to discuss Disma, Citizens Arrest, Funebrarum, Assuck, and cassette trading culture. The results are below.

What was the genesis of Disma?

The grisly tale of Disma shall now unfold....

After Funebrarum recorded our album The Sleep of Morbid Dreams in 2007 the band took a break which lasted much longer than I expected. Frustrated with the situation I started writing riffs with my old friend / guitarist, Bill Venner. Bill and I have very similar taste when it comes to Metal and our writing and guitar playing styles are also very similar. So began the manifestation.... of Disma.

After we had a few song ideas down we started rehearsing with Shawn Eldridge (Funebrarum's drummer). With this line-up we wrote "Lost In The Burial Fog", "Chaos Apparition" and "Vault of Membros". Soon after, bassist, Randi Stokes was asked to joined the band. Disma continued as a four-piece for several months refining the songs that became the demo. Craig Pillard (an old friend of mine who also played guitar in my old band Abazagorath on our European Tour 2004) saw a rehearsal video of Disma at Randi's house and immediately asked to join the band on vocals. The rest is history.... 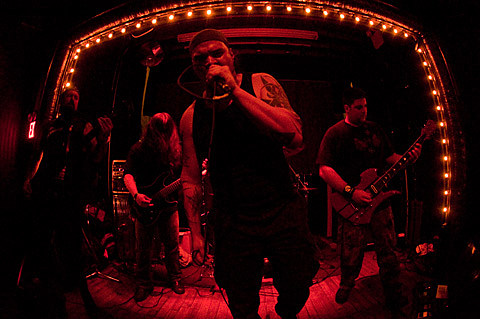 As a child of cassette trading culture, it makes sense that Disma released their demo in that fashion. What are your thoughts on the current resurgence of cassettes as a musical medium?

Cassettes were a great medium but it honestly takes too much effort to take the actual tape out of the case and put it in the damn player... its too much work haha... We demand instant gratification!!

Disma recorded our demo The Vault of Membros at an 100% Analog studio so in order to fully retain the sound we captured the only option was to release the demo on cassette tape. The demo did really well and it was fun cutting out all the covers at Kinko's and assembling the tapes like we used to. Honestly, I have not seen many demo tapes for sale at shows or in record stores but I suppose people still do it.. I still have my old demo tapes from the 80's and 90's but I rarely listen to them. Demos were always cool. There was nothing like getting a package from a foreign country and finding a few interesting-looking tapes inside along with those small flyers, stickers etc.... Maybe it is all too easy now which may take some of the mystique out of the whole thing? Keep putting out demos and zines... keep the underground scene alive!

Who does the bulk of the songwriting in Disma?

Bill and I write all of the riffs and arrangements but we all contribute to making Disma what it is.

What are the plans for the vinyl?

Our new album Towards The Megalith was released on July 19th 2011 on the Canadian record label Profound Lore Records. The vinyl version will be released on the Czech label, Doomentia Records in several months. The first 500 copies of the vinyl LP edition will come with a limited edition 7" ep with two new bonus tracks Release date: TBA 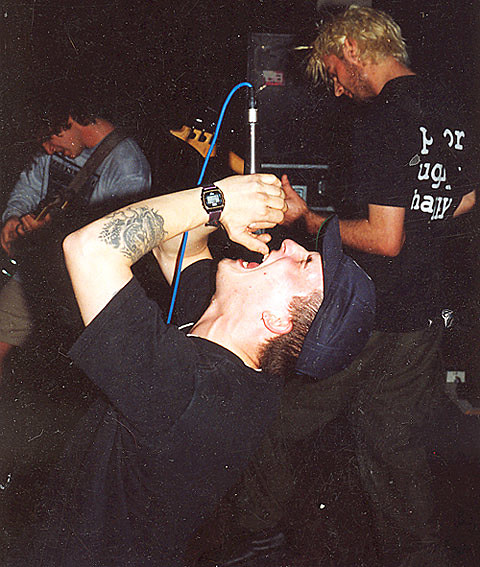 What was your role in Assuck and how did it unfold?

Yes, I sang for them on their European tour in 1993 and it was probably my greatest tour experience ever. This is how it went down. A knock on my dorm room door.. phone call for you... I walked down the hall to the small phone booth and picked up the phone "...... ummm Hello, you don't know me but we want you to sing on our tour" A few calls later and meeting with the Dean, I had a tape with all the material and lyrics which I practiced with non stop for a month. They flew me down to Florida for a few days of rehearsal before leaving for Germany. We had a blast touring with an German band called Abc Diabolo... After the tour Assuck offered me a full time position with them but I opted to finish school instead. Who knows where it could have lead.
I enjoyed being in the band for the tour and was honored to be asked.

I met up with Steve Kosiba (Assuck bassist) and Dave "Spinach" Malinksky" (a later vocalist) a few years ago at an Amebix show in New York City and enjoyed catching up with Steve and meeting Spinach. I am proud to be part of the band's legacy even though I played a relatively small part. 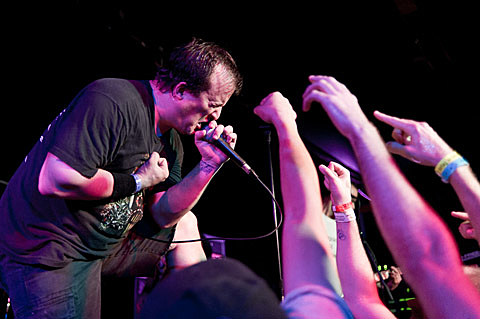 One of your first ventures was obviously as vocalist for Citizens Arrest, a hardcore band with metal leanings. What were some bands that influenced you in your trajectory towards metal and away from hardcore?

I started learning the drums in 1982 and ended up playing in several young punk bands like Plastic Turn, The Phallic Atrocities and Complete Control (who never recorded anything). We were just young guys having fun playing music and learning the ropes or trying our best.

From listening to the radio, a few chance purchases and having older friends, I discovered punk and metal at the same time and followed both with rabid enthusiasm. I remember buying the Sex Pistols "Anarchy in the UK" LP single and Venom's "Welcome to Hell" LP the same day. There also was a great store in my hometown called "Two Tone" that sold all kinds of punk, oi and metal stuff. This was were I hung out with friends and discovered local bands like Genocide, Sand in Your Face, Bloodfeast, Corpse and Mental Abuse... Two Tone was a mecca for hardcore kids, skins, punks and metalheads... it was a great environment and time for kids into underground music. In 1987, I joined a hardcore band called Clenched Fist who featured ex-members of Mental Abuse and Agnostic Front. (Hello to Perry and Chris Fist!!!) I formed Citizens Arrest the following year. 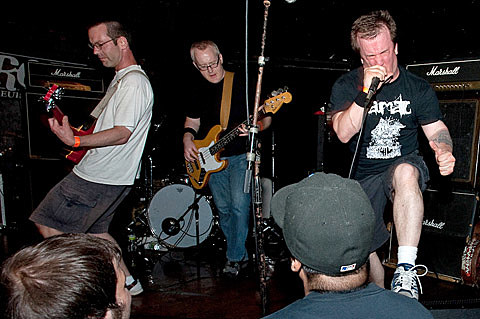 What are the future plans for Citizens Arrest? Anything for the west coast?

Citizens Arrest are now working on a new material and are looking at labels for a new release! We are psyched to be playing again and have plans for some local and out-of-state shows (including all ages) in the near future, but nothing planned at the moment. We are working on Boston, Richmond and possibly Canada. We would love to play the West Coast and have talked with the Tragedy guys about making that happen. We also recorded a new EP called Soaked In Other's Blood which is available for download via Coextinction. Check it out! 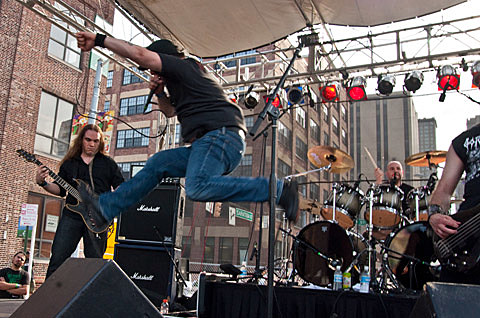 What is the current status of Funebrarum? Can we expect new material in the near future?

Funebrarum will be playing "Killtown Festival" in Copenhagen, Denmark in early September with some great bands. We are also playing with two of my favorite bands (Demigod and Strid) in San Antonio, Texas in December at The Rites of Darkness Festival III. There has been talk of a new release but time shall tell...

Musically speaking, does influence come from modern bands? Are there any modern hardcore bands that you enjoy?

Influence comes from within mostly, books, dreams, films... I am somewhat out of the loop regarding the modern HC punk bands but I am extremely psyched bands like DYS, Antidote, TWE are active now! Support these bands! 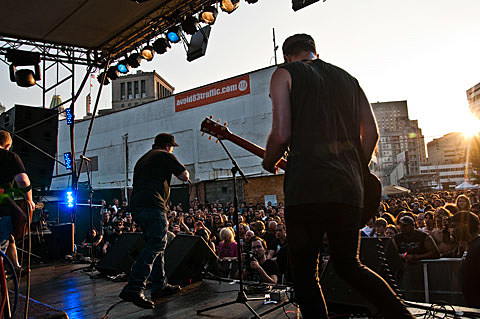 You are tasked to curate a show of eight bands, any era and any genre. Excluding any bands you have an involvement in who is on the show?

PLACE: A mansion with a big stage, excellent sound system and lighting inside...good food and drink for all...
TIME: The Present

GROTESQUE (INCANTATION ERA) AND ADRAMELECH (SPRING OF RECOVERY ERA) OPEN THE SHOW!! A man can dream can't he.....? 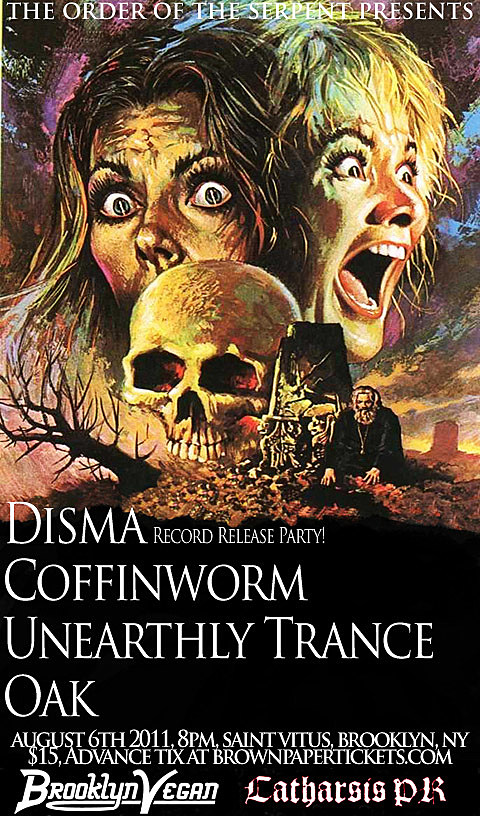