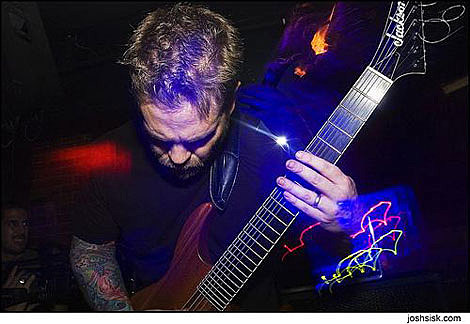 Scion Rock Fest in Atlanta is just a few days away (Feb 28th) and until the opening tones of Kylesa's guitars, we'll present a series of discussions with some of the key artists taking one of the four stages at the Masquerade.

As either the maniacal mastermind behind Agoraphobic Nosebleed, riffmeister for deathgrind gods Pig Destroyer, ex-member of provocateurs AxCx, or honcho of Visceral Sound, Scott Hull has left a significant mark in the racks of your friendly neighborhood record store. On April 14th, Scott Hull's "digi-grind" project Agoraphobic Nosebleed releases it's second LP, Agorapocalypse and although ANb won't be in Atlanta (the band has logged only one show in it's existence), Pig Destroyer will. We sat down with Hull to discuss his upcoming work behind the boards, the current status of Pig Destroyer, solo work, and the coming of the Agorapocalypse.

Agorapocalypse drops on April 14th, how would you estimate the new ANb differs from previous releases? How has the addition of Kat changed your sound?

I feel as though everything leading up to Agorapocalypse has been nothing more than a series of demos. For me Agorapocalypse is where the band really starts. The sound is more focused and alive. It doesn't in any way resemble "digi-grind". In addition to Kat's amazing vocals, she's added a new sense of excitement to the band. She's opened up a lot of new possibilities and brings a unique perspective.

When can we expect to see some of those splits that ANb have lined up? With Despise You, Thrones, etc...

All in 2009. Currently working on the Despise You and Thrones splits side by side. The Crom split is already out. We're waiting for our copies.
The Endless Blockade split should be out soon as well.

ANb has only played live once. In celebration of your second LP as ANb, can we expect you to play your second show? Considering that you last played at a Pig Destroyer show, and Kat'll be there, hows about at Scion?

Hah! No. When/if that happens again, it will be a big surprise to everybody.

Possibly one of the only shots of ANb Live. 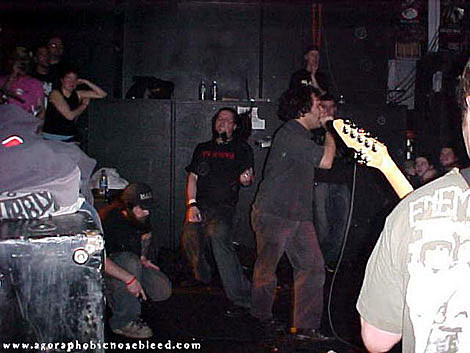 In general what is your writing process and how does it differ from project to project? Do you write to the drums as ANb?

Just me, a guitar, and my DAW [Ed: Digital Audio Workstation] with Toontrack's Drumkit From Hell. Working out riffs. Working out arrangements. Drum hit by drum hit.

Is there any new Pig Destroyer material in the works? Can we expect some new songs at Scion?

We haven't really started down that path yet. We're playing a couple of shows before we knuckle down and start writing for a new cd later this year.

You released Requiem and the 3" Audiofilm MCD last year. Both were in an ambient/soundtrack/Lustmord vein and I understand that it is part of a series... what new Scott Hull releases can we expect in the coming year? Who/What were some inspirations in their creation?

Requiem is actually a movie score that I composed and performed. That's not really all that Lustmord-ian. It's actually quite conventional. The Audiofilm series is much more in that vein though Audiofilm II and Audiofilm III should be out this year. Additionally, I've been working on and off on a project that combines late 70's fusion (John MacLaughlin/Jan Hammer/Lenny White) with heavier elements such as grindy bass, heavier drums. So far that sounds pretty good.

What production and/or mastering projects do you have coming up? 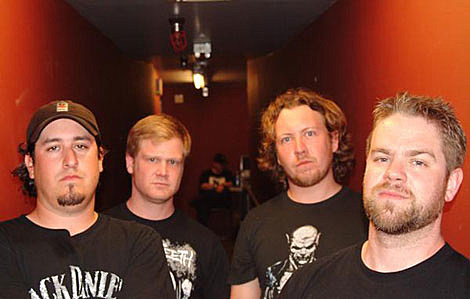 Harvey Fucking Milk. And Boris. And a lot of old friends. . .

Special thanks goes out to Scott, Betsey, and Relapse.