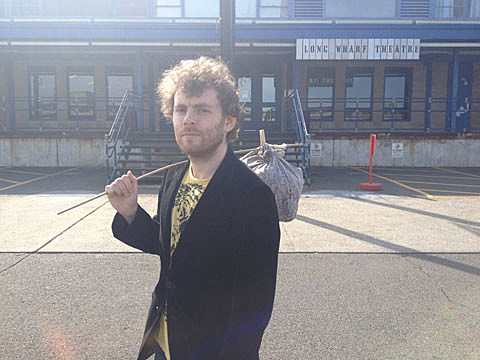 Gabriel Kahane's new musical February House will be at NYC's Public Theater May 8th-June 10th. The show debuted Feb 15th at Long Wharf Theatre in New Haven, CT, and the Hartford Courant, condensing its review to a Twitter-length blurb, called it, "A haunting, intimate chamber musical so special you want to wrap your protective arms around it." A TV spot and a teaser for the musical are below.

Before that gets to town, Gabriel Kahane plays a solo show at Rockwood Stage 2 on Monday, February 27th. Tickets are on sale. We've also got a few pairs to give away as well. Information is below. At the gig he'll be performing songs from his excellent 2011 disc Where Are the Arms (streaming on his blog), as well as other solo material and possibly some songs from the musical.

Gabriel's busy year also includes a premiere of one of his pieces by American Composers Orchestra on March 22nd at Carnegie Hall's Zankel Hall and an entire night dedicated to his music at the same venue on October 22nd.

As for the future, Gabriel told us, in a short interview you can read below, about the commissions and material for a new album he's been working on, and he says he's been contemplating a musical work based on David Foster Wallace's Infinite Jest.

Read the interview, along with the videos and Rockwood contest info, below...

How far along are you with writing a follow up to Where Are the Arms?
Err.... ask me that question again in four months. Actually, I have an idea for a record of string quartet-based songs, building off of three commissions--I wrote a piece last year for the Calder Quartet and myself called "Come On All You Ghosts," which takes its text and title from a collection of poems by the awesome Matthew Zapruder, a San Francisco-based poet I've come to love. Then Carnegie Hall has commissioned a piece for me, Brooklyn Rider, and Shara Worden, which I think will also take the form of a cycle of songs. And lastly there's an instrumental quartet that I'm writing for the Linden Quartet... Since I haven't released a record of "new music" per se, I thought this might be a good opportunity to put out a body of work that straddles the line between song and something more formal.

At your Carnegie Hall show in October, the program says you'll be playing songs by "Barber, Cee Lo Green, Yotam Haber, Ives, Kern, Andrew Norman, Schubert, Schumann, and Sufjan Stevens" for part of it. How did you come up with that group?
The genesis of the idea came from Jeremy Geffen, the Artistic Administrator at Carnegie Hall, who saw a YouTube video of me doing a medley of the Schumann song "Ich Grolle Nicht" and Cee-Lo's "Fuck You" [since taken down]. The point of eliding those songs for me was not gimmickry--I see them as talking to each other across a century and a half, in that they're both break-up songs about summoning dignity after someone has fucked you over. Jeremy asked me if I wouldn't consider devoting part of the program at Carnegie to a solo set at the piano in which I would draw connections between old and new... so in essence, I've chosen songs by my peers to pair with songs by dead white guys, and my hope is that the parallels will be visceral and not just intellectual. And in so doing, I hope to make a bit of an ideological argument about why it's stupid to make distinctions between pop songs and art songs.

Is this Rockwood show your last show for a while or will you be performing through the spring and summer?
The Rockwood show is my only "pop" show in NYC for a while... Next month, I have a new piece premiering at Zankel Hall called "Crane Palimpsest" with American Composers Orchestra... I'll be singing and playing. The text is by Hart Crane, interspersed with my own lyrics. It involves the woodwind players blowing into beer bottles, which I think we've all done drunkenly at one time or another, amirite? I'll do that piece a couple times in LA in April with my dad's orchestra (nepotism!), and then back to NYC for rehearsals for February House at the Public as well as a premiere of a cello sonata at Chamber Music Society of Lincoln Center.

In a recent interview you mentioned the next stage show you take on might be a project about Alcoholics Anonymous. What form do you think that will take?
Oh yeah, speaking of AA. Not sure. Truth is, I'm torn between doing something specifically on AA on the one hand, and trying to adapt DFW's Infinite Jest on the other. There are a couple of options on the table as far as presenters are concerned for my next theater project, and I'm trying to figure out whether I want to write another more or less traditional "book" musical, or do something that's more abstract... I had a quasi-religious experience reading Infinite Jest over the last year and a half, and feel like it offers at the very least, a model for how ambitious we ought to be as artists working today.

--
For a chance at winning a pair of tickets to see Gabriel Kahane at Rockwood Music Hall: send an email to BVCONTESTS@HOTMAIL.COM with the subject line "Gabriel Kahane" with your first and last name in the body. We'll pick two winners at random and contact them with more details. Your email will not be shared with anyone else. Good luck!
--