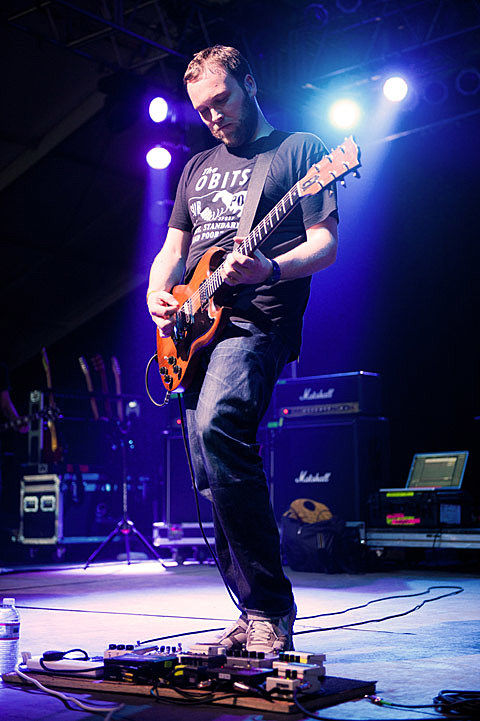 Having released their eighth full length last month with Rave Tapes, Glasgow's post-rock kings, Mogwai, have time and again shown themselves to be a band unhindered by demand or anticipation. Theirs is a kind of creative elasticity that's allowed them to move comfortably both within and without of any particular sound with which they might be associated. From soundtracks to punk to post-rock minimalism (to scotch), Mogwai's sound has continually and thankfully been difficult to corner, and it's a characteristic that continues to guide its five members well into what will soon be the twentieth anniversary for the band. BrooklynVegan reached out to Barry Burns (guitar, bass, keyboards, vocals) of Mogwai to talk about Rave Tapes, the band's influences, and what the secret to band longevity is.

BV: You guys have a story that goes back to 1991. In the twenty-three years since that time how have you seen yourselves evolve both personally and artistically? What's the journey been like for you guys, and what have you learned along the way?

Barry: Actually only since 1995 but that's still a long time to be doing this for a job. I joined in '98 for the 2nd album and we've really kind of grown up together, spending terrifying amounts of our time on buses, planes and stages. We've learned how to "be in a band" and we're still learning new things since self-releasing our music a few years back, there's been a lot of trial and error. On the whole, the experience has been incredible, from watching the entire record industry crumble to getting to play very unusual places around the planet and then being asked to score soundtracks for films or TV. We're lucky, but we work hard too.

BV: Mogwai has never stayed too comfortable with one specific sound or genre, and it's something you've managed to masterfully use in bringing together what's obviously a myriad of influences. Has the creative process changed for the band since Mogwai Young Team in 1997 to this year's Rave Tapes, or is it largely the same?

Barry: There are certain touchstone bands that we all like, probably more as we get older but we do have pretty different tastes in music as well so that's no doubt helped us sound how we sound. I think we've had varying stages of preparedness and panic when it comes to the whole process of making our albums. Sometimes one method will work for a tune, other times not. This time around we were a bit under prepared but improvising in the recording studio is something of which we're quite fond. I think the only album that was really ready before being recorded was Come On Die Young. Writing songs doesn't really come easy and arranging them is harder still. There is no better relief than the last day of mixing an album.

With Rave Tapes, there's a more subdued atmosphere that seems to both complement and contrast the more rock n' roll textured Hardcore Will Never Die, But You Will. Was this release a deliberate removal from the more abrasive musical tendencies, or was it more of an exercise in the unconscious/natural progression of the band's sound?

It wasn't really discussed or planned out but the new instruments (synths mostly) we'd bought made a huge difference to the final album sound. Dominic, our bass player, put himself out of a comfort zone and plays the synth bass stuff on the record. I'm very pleased he chose to do this, it's out of character really. Even while the recording of the new album, we'd have all these extra tracks and parts on songs that were deleted just to strip it back a little bit. We'd done the layers thing on the previous album so it was time to chop some of the stuff out this time to see what we sounded like.

After Zidane, The Fountain, and now Les Revenants, have you always seen Mogwai's compositional perspective lending itself to soundtracks? Is every Mogwai release/song a kind of aural representation of something that's inherently visual for you guys when you're writing?

People are always telling us we should do more soundtracks but it's not that we don't want to, it's that we don't get asked often. I think we've shown we can do that quite well now so hopefully more will come. As for the visual thing when we're writing, no not at all. It's as basic as going to a studio making up a bunch of chords or tunes and getting together to make it sound nice. I like that people who listen to our music sometimes tell us stories about what it makes them think about, often to a stifled laugh because....it's a bit weird isn't it?

Having created and released music well before the advent of social media and the "information age," have you seen music criticism and fandom become more open to music that experiments? Is it easier now to take risks as an artist, or is there simply more people exposed to it therefore allowing for more of a response across the board?

I don't know....perhaps experimental stuff has proliferated more due to the easy access and also how simple and inexpensive it is to get your music somewhere where it could be heard. Maybe it was harder to go and find some pretty wild stuff back then whereas now, you can just go and find one website that is dedicated to blogging about that kind of thing and you have a mine of new bands to trawl through.

I'm curious to know what the initial creative spark was for the individual members (or member) of Mogwai. Was there a specific band or album or even song that worked as a kind of impetus for you to where you knew that creating music was something you absolutely had to do?

Having heard Stuart and Dom answer this question a lot, I know that The God Machine and bands like Rodan and Slint were a big reason. I'm sure MBV features in there somewhere too, and even Joy Division. There must be many more.

Longevity seems to be a rare commodity with so many startup bands these days. What's kept Mogwai intact and also so prolific over the band's history, and what obstacles do you see for bands starting out much in the same way that you all did?

Friendship has been the most important aspect I would think. Doing this particular job with a conflict of personalities cannot be fun and for us, probably impossible.....you've only got to look at the amount of people/companies we've severed ties with to see that! We've been persistent in what we do and we're definitely not afraid to put in the work. The obstacles now are probably the fact that to tour costs a lot of money and no labels give out tour support any more (i remember when that vanished from our contracts); the difficulty in selling music because there is a whole generation of people now who have had music for free, and to try and reverse that is very difficult. But great music often manages to get through somehow.

Catch Mogwai at Sasquatch, Primavera, Coachella, at Terminal 5 in NYC, and on tour in a town near you...