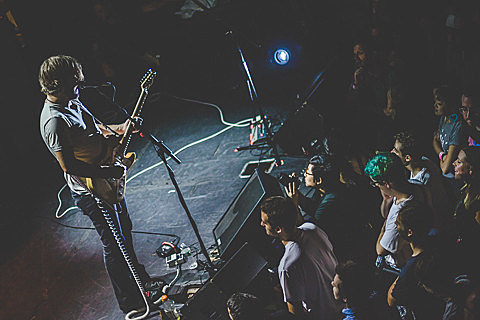 Influential emo band Mineral have been on their first tour in 17 years, since breaking up back in 1997, having just wrapped up a four-night run in NYC this past weekend. (Read our review of Saint Vitus, check out pictures from Bowery and pictures of their surprise Austin show.) The band's brief career (1994-1997) only resulted in two full lengths, the rough loud-quiet-loud debut, The Power of Failing (1997), and the more dynamic, layered and slowcore-influenced EndSerenading, which didn't come out until 1998 when they had already broken up. The band's current reunion tour is actually the first chance Mineral have ever had to tour EndSerenading, and so far the band have been in great form, sounding like they never left.

Mineral singer/guitarist Chris Simpson took some time out of his day over the weekend to talk to us about the tour, the term "emo" (and the "revival"), the new material he's putting out with his Zookeeper project, and an unfinished record from his post-Mineral band The Gloria Record that may very well end up being released.

After so many years away, what was it that made you want to go back to Mineral?

Chris Simpson: I think it was was just sort of a thought that had been ruminating for a little while but about a year ago it was really put on our radar. So, it's really been pretty recent. We were starting to think about the fact that it's been 20 years--I was starting to think that, and just in the back of my head I knew that was approaching. If there was going to be a time to do something, maybe now would be a good one.

We started thinking about it a little bit like that, and then Jim Adkins from Jimmy Eat World asked if we might consider reuniting to do like one show. So we started working towards that and thinking about that and that show didn't end up happening. But we were already rehearsing and it felt pretty good so we got an agent and booked some shows.

In that same vein, it's been such a long time since that Mineral material was written. How does it feel for you personally to return to those songs that are entrenched in a totally different time of your life?

Chris: It's definitely an interesting aspect of this whole thing. I have found myself able to connect with this stuff pretty well, it's even felt relevant. Even emotionally, which is surprising.

If you don't mind me asking, why do you find yourself connecting with the songs again?

Chris: It's just that the content feels current. It's almost like I'm right back there, way back when I was singing them. It's not like "Ah, this is nostalgia!" More just that I remember and connect with where the songs come from.

When you first decided to go out on this reunion tour, what did you think the reaction was going to be? All four NYC shows sold out right away.

Chris: You never really know until you put the tickets on sale, never know what the response is going to be. We were definitely surprised at how excited people seem to be. 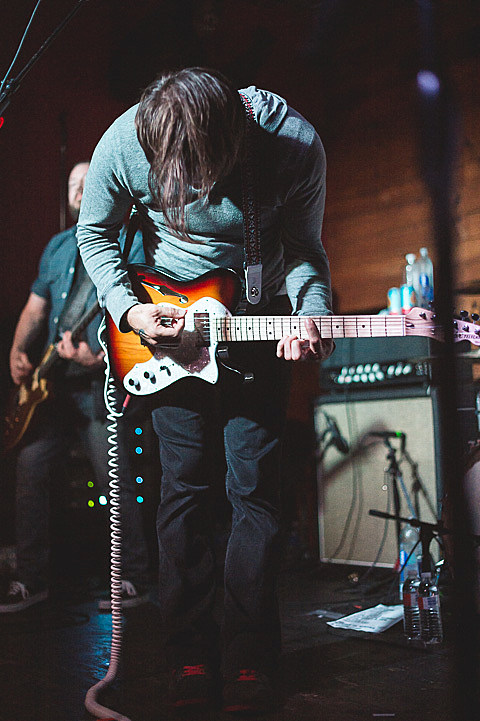 When Mineral was ending, a lot of the bands in the scene were getting bigger and you had just signed to Interscope. What were the feelings in the band at that time about the scene's growing popularity?

Chris: I think it was a little bit after we ended that I started to see that those bands were really getting bigger. Like Promise Ring and Jimmy Eat World--bands that stayed together. To us at the time, it felt like everyone was breaking up. It seemed like a lot of people were breaking up, in retrospect.

Who were you seeing break up at the time that gave you that vibe?

Chris: Bands like Christie Front Drive, Boy's Life, Giant's Chair. All these Crank! [Records] area people basically broke up and it was the thing to do. For us I think it was just personal, it just didn't feel like something we wanted to do anymore. At least for Jeremy [Gomez, bassist] and I.

When EndSerenading came out, the band was already broken up. When that album came out, did you feel that Mineral left some things unfinished? Or has it reached its natural end?

Chris: I felt like it was at its natural end and ready to be done, for sure. I feel like I had that feeling making the record too. We finished it, the band wasn't together anymore.

What was the process like for finishing that album, knowing you weren't going to be a band anymore?

Chris: It was really hard but we wanted to finish it. Most of what was left to be done was vocals, which was really just coming up with lyrics and melodies. I was just working on that for the most part, and mixing. It was interesting doing that now knowing that the band is over because it definitely affected some things that happened in the process of making that record. Like I was interested in a lot more vocal layering--especially with the last three vocal tracks on the album. Those layered vocals, multi-tracked vocals, I did things like that because I knew I wouldn't have to do that live.

Experimenting with things you knew you wouldn't be able to get away with live and seeing how far you could push it.

Chris: Exactly. But it's really fun to play that stuff live now, you know? At this point, what makes it really fun is finally getting to have a live version of these songs that we love.

Shifting away from the past, there's a huge scene of bands right now that are making music feeding off the spirit and sounds of Mineral. What's it feel like to have so many bands being influenced by songs that you wrote 20 year after the fact?

Chris: It feels crazy. Just surprising, really. I could get some sense of it over all that time, but not a very direct sense of it.

Was there any specific moment where you really started to pick up on that?

Speaking of someone who cites Mineral as an influence, you sing on the new Empire! Empire! I Was A Lonely Estate album. How did the connection with Empire! Empire! come about?

Chris: I met Keith [Latinen of E!E!], he had just written me emails and invited me out to shows in Austin. One of them happened to be right around the corner from my house at a record store, so I went and checked it out, met him. We've been friends casually since then. He asked me to sing on the record and I'm actually putting out a Zookeeper record on his label [Count Your Lucky Stars] as well.

--
Empire! Empire! - You Will Eventually Be Forgotten

Do you think you would have eventually put out a record on Count Your Lucky Stars if he hadn't asked you to sing on his album?

Chris: No, I mean it was just one of those situations where I had a record done and he was kind of just like, "I put out records." It seemed like an easy match. It'll be fun to actually just put it out there.

Do you ever worry about people having unreasonable expectations about the Zookeeper record because it's coming from "the Mineral dude?"

Chris: It's possible I guess. I don't think it's going to be exactly what you would expect, it's something else. [laughs]

What has been inspiring the Zookeeper album?

Chris: I think it's just a totally different phase of life than when I put out anything else. I'm older, I'm domestic and I'm having kids. Those are the sort of things I've been thinking about. That being said, they're not necessarily songs for kids. But just shorter, simpler songs that are really short and simple and really nice melodies. Working around that and maybe building things up a little less than we would for say a Mineral song. It's definitely a lot more subdued material.

Any plans for new Mineral material?

Chris: That's been a popular question. It's not anything in the plans, we're just trying to play these shows. That's all we've had time to prepare for so far. If that were to happen it would not happen immediately. It would take some time to develop.

It feels like the idea was just to do this one tour and then be done. Would you ever think about keeping Mineral around as a touring band?

Chris: It's not ultimately the sort of life I'd want to have anymore. But I just don't know if that would be appropriate if there wasn't at some point new material. You can't just go on a permanent reunion tour. I guess Neutral Milk has done that... Yeah, some bands really stretch out the reunions but I don't think that's on our radar. We don't wanna "just keep touring," y'know?

How did you finally settle on Into It. Over It. as the opener for the tour?

A lot of the older bands kind of hated getting stuck with the term "emo," Mineral included. Now it seems like there are a lot of bands out there that are pining to be a part of the "emo revival." How did you react when Mineral's stuff was described as emo?

Chris: I think it got sort of slapped on us. I remember when I first heard it I thought it was referring to the club in Austin, Emo's, which we played at sometimes. I was trying to figure out what that would even mean, like "It's kind of an emo band" translated to "It's sort of an Emo's band" in my head. I would think of the sort of bands that played at Emo's, what kind of band would that even be? I had a very different picture in my head than what they actually meant.

What was the meaning in your head?

Chris: Emo's just had a lot more kind of garagey punk stuff, kind of grungy stuff. So I just thought it must have been referring to that kind of sound, I couldn't figure it out.

When emo really started blowing up, a lot of the bands that were still around started to change things up. The Get Up Kids got folkier, The Promise Ring and Jimmy Eat World got poppier, Sunny Day Real Estate and The Jazz June got weirder. With The Gloria Record, it sounded like you were working more outside the confines of the genre than you were in Mineral too. Was that an active rejection of where emo was headed, or just a natural progression?

Chris: It could be both. I know bands definitely didn't want the term. So we were maybe interested in getting away from it and doing something different. But maybe it was just natural progression too. As people are musicians and writers for longer, they start to evolve and we didn't get to see what Mineral's evolution would have been. But if you follow The Gloria Record's trajectory, everyone was trying to do something different.

If and when the Mineral reunion ends, would you ever think about reuniting The Gloria Record?

Chris: Yeah we've talked about that over the years, for sure. We have an unfinished record that was supposed to be the second record. It's kind of half done. We've talked about pulling it out--we've actually put it on the computer a few times and listened to it. I think that's a definite possibility, we're all so close and I think that's definitely a project we would be interested in taking on.

--
The Gloria Record live at Curtain Club in Dallas, 2000

Catch Mineral on one of their upcoming tour dates...

* Into It Over It supports