Bob Geldof and The Boomtown Rats 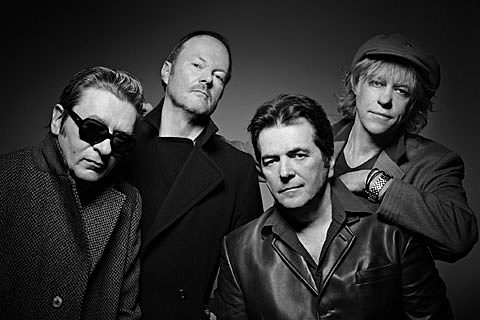 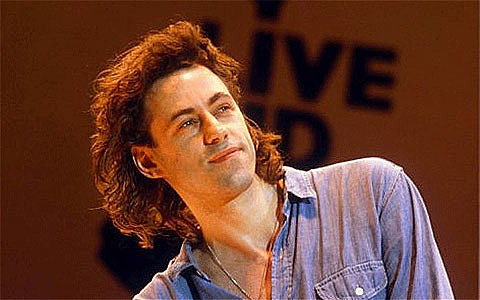 Bob Geldof's legacy is a given. Whether with the humanitarian efforts of projects like Live Aid, Band Aid, and Live 8, or the musical endeavors of The Boomtown Rats and his own solo work, the honorary Knight of the British Empire has done more than offer a service to the entertainment industry. The 1980s saw Geldof's name become synonymous with philanthropic empathy that went far beyond the well-timed rhetoric of rock and roll's cause promotion. Geldof backed the attitude with something tangible and inspiring, bringing together events that raised awareness for those often ignored issues of worldwide poverty and famine. Talking to Geldof reveals a kind of casual dismissal of the work he's done as being anything more than a product of rock and roll's power or at least the power it once wielded. With upcoming Boomtown Rats shows this weekend in NYC and Boston, announced just months ago and months after the tragic death of his daughter Peaches (most likely not coincidental timing), Bob spoke with BrooklynVegan about the endearing simplicity and therapy that music still affords him and why he thinks music isn't the force it once was for change and progression.

BV: You've got these two Boomtown Rats shows coming up in New York and Boston. Obviously in the context of everything you've done both in the musical and in the humanitarian realm, reunion gigs seem almost like a no-brainer. What is it that continues to drive you now after all these years?

BG: Time is short. Curiosity. The road less traveled. I think those things. I mean, you know, in the course of this conversation you might say something that sort of piques my interest or I sort of ask you about it, and we go way off piece on the interview. Some people come out of that or something. That tends to be what happens, but the spine of it all - and I'm not trying to drag the conversation this way - but the spine of it all is music, because practically everything that happens spins off of that. I need to come back to the music thing, and I know this sounds completely ridiculous and cliché, but it's completely true. Last night we were playing in Cornwall at a festival there, tomorrow I'm going over to Missouri, and then coming back here to do another gig, and then going back to New York and Boston for those shows. Really you don't need to do that, not at this stage in the game, but I absolutely love it. Just beyond love it. It's a pure function - a necessary function for me. That function itself is incredibly cathartic if you've got a load of stuff going on in your head and in your life, and it works itself out whether in songs or on stage. There's two sort of parts of that. One's the solo stuff I do, and that's sort of internalized. I play the guitar, and I talk. The gigs kick off. And then the Rats, which is a different character like a sort of Bobby Boomtown comes out in a snakeskin suit and something else goes off. I know it's something a million rock and roll guys say, but it's absolutely true. I'd give up everything else, but I wouldn't give up that.

BV: I think one thing people would immediately associate with that statement is the fact that you specifically "giving up everything else" would involve an enormous amount of work outside the music spectrum. You've certainly done the rock and roll star thing, but you've also stayed just as rooted in those realities that the world faces as a whole.

Is the conduit that rock and roll provided simply not as powerful or useful for change now?

It can't be. It's not the job of rock and roll. If you take those twin elemental forces: Little Richard and Elvis Presley. They didn't understand. Of course they didn't. "Tutti Frutti" has of course some of the greatest lyrics in rock and roll. It's just this articulate scream of rage and fuck you, you know, and of course it's done by this beautiful, young, and black gay minister. Hello, we're coming. Fuck! [Laughs] And then to make it a little easier, you get his direct equivalent in this beautiful, young - and it's necessary for them to beautiful. It's necessary for them to be young. It's necessary for them not to be able to understand intuitively that they're tearing up all previous style, all previous musicality. They don't know they're doing that, which is essential. Both of these people are sort of saying that "Hey, you've invented this economy of forgetfulness, this consumerism, this American dream. We want it. We fought the fucking war, too. We're not staying out of this one. We're coming. We're here whether you like it or not." That was music with clear intent, but none of the protagonists understood its intent. Then you go down the track a few years later, and you've got people deconstructing that, getting a little more granular. Now there has to be different ways of doing that. It remains to be seen what replaces it. It goes back to where it doesn't matter what the content of the web is, it's all free. Look at U2, one of the greatest bands to ever emerge in the last forty years, and they give it away free. Bono's clearly aware of the effect of that. It's just stuff to move the medium which is iPhone 6 or something. You advertise who you are, how cool you are, by touting your new phone. Instead of walking around with the album on our sleeve that says Blonde on Blonde, you flash your iPhone or your Samsung Galaxy or whatever the fuck it is. That's more important.

Yeah, apparently people haven't been too keen on the automatic downloading of the new U2 record.

You know, they're old, old, great friends of mine, and he's a great personal friend of mine, and we've been texting this morning, and they sense where this stuff is going. It won't diminish. Obviously it's a bit of a no-brainer as well because it goes to all these millions of people. Having said that, loads of people don't know that they have it on their phone. It's weird to me, and I touched on this at SXSW a couple of years ago when I did the keynote, and I didn't know what to talk about, and eventually I ended up with relevance. It's just not relevant. Who cares about a number one single? Who cares about American Idol? It's just entertainment, you know? It's ubiquitous. It won, but in its ubiquity, it's impotent. It's not to say contemporary music isn't great. Of course it is. There's lots of bands popping up everywhere who are fantastic. My kids have got boyfriends in two really excellent bands. I'm thrilled that I can say that. Is it in any way art, though? Not at all. Art plays to the one percent. Art is the commodity. Art is what Lee Siegel defines as "whateverism". There are these great existential global threats and what has art got to say to them? Nothing. Whatever. It's a great type of whateverism. It's empty. And perhaps that's the point. But I don't think we're empty. I think we're just confused. The 21st Century is fourteen years too late in starting, and so was the 20th Century, and that's a lesson we've got to be very careful of how we do get it started. We don't want the cataclysm of the 75 Year War that was the 20th Century. There's plenty to be alert to, but our art and what we are saying: we've got a balloon, we've got a stuffed shark, well - well done, lads. It's bollocks. Art, like rock and roll, needs a context in which to exist. For Elvis and Little Richard the context was clear. For Dylan and Mick and John, it was clear. For Johnny and Joe and Bobby and Elvis and all of those, the context was clear. The bands emerged because there was a contextual necessity, but perhaps they don't emerge now. Perhaps there's something new to emerge. The brilliant Iranian filmmakers - they've got a very clear context. There's no way to feel that an artist has to have a sort of political opinion. That's more or less saying that a plumber has to have a political opinion. It's ridiculous. The job of the artist is to create good art, and they only fail when they create bad art. That's it. That's like getting the plumber to fix your fucking toilet, and then he starts talking to you about the fucking Tea Party. "Dude, fix the fucking toilet." He fails as a plumber if he doesn't.

Tickets are still available for Friday's Terminal 5 show and Sunday's show at The Royale in Boston. The Stunning and Mundy open both shows.

Boomtown Rats - Someone's Looking At You | Isle Of Wight 2013