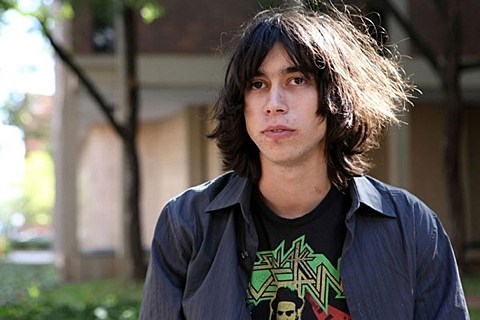 Alex G is currently on tour with Gardens and Villa, having played NYC earlier this week, and he's now been added as an opener to the December leg of the Cymbals Eat Guitars Northeast tour. That includes the NYC date happening at Knitting Factory on December 12. Tickets for that show are still available. All of his dates are listed below.

Alex G released his first "proper" album DSU on Orchid Tapes earlier this year, which followed several bandcamp releases. He recently took some time out of his day to talk to us about the album, his confidence, songwriting process and his affinity for animal imagery:

BV: DSU came out earlier this year, and obviously you've been making music for a long time but it felt like a landmark in your career. What has life for you been like since DSU was released?

Alex G: It was pretty similar until... I guess the big difference is that we started touring and this became more job, kinda. I haven't been working any more. We've been touring a lot since DSU came out.

What was your old job? What did you give up for touring?

AG: I was doing construction labor in a little town near Philadelphia.

It's not far into the album when you lay it out: "Success for my buddies, success for my friends." It seems like DSU has been able to do that which I think would be really fulfilling as an artist.

AG: Yeah, absolutely. It's a great feeling when you feel like you do someone a favor, you know? I don't know if I can put on for the other guys because they - Mat Cothran, the guy who is Elvis Depressedly and Coma Cinema, he's helped me so much. I feel like my shit wouldn't have been noticed at all if it wasn't for him using his big fanbase to push my sound.

I found out about you through Mat. Is that connection how you got involved with Orchid Tapes?

AG: I got an email from Mat saying, "Hey, let's put out a split," or something and that never panned out. Through him I heard of Teen Suicide and Foxes In Fiction and stuff. I guess he had been showing my music to them, so we played a couple of shows together. I went up to Maryland and played some shows with Elvis and Teen Suicide and Warren [Hildebrand, co-founder of Orchid Tapes] put together that [Orchid Tapes] showcase before I was involved with Orchid Tapes. He still booked us to play. That's how I met Warren and we kept in touch. Me and the guy, Tyler, who ran Birdtapes kept in touch. I was gonna do [DSU] with Birdtapes initially but it kind of fell through and Warren was nice enough to be like, "Hey, I'll do it for ya." It all just worked out.

What music are you listening to now that's influencing where you're heading in the future?

AG: There's this band from Texas called True Widow. They probably have no idea that I exist or anything but they're just a really amazing band. I listen to them all the time, so that's probably my biggest influence right now. Besides that, we went on tour with Elvis Depressedly and it was really cool to be around Mat and Delaney [Mills] and [Eric] Jones and Dr. Vink or whatever the fuck people call him. Those guys are just so great. It was a really great experience so that's something that will probably bleed through into my writing. I can't put a finger on how, but I'm sure it will.

Now you're on tour with Gardens & Villa and you're going to be on tour with them for the next month or so. How's the tour been going so far?

AG: It's been really good. They're just really nice guys, so I'm glad we got lucky with this tour. They told us some funny stories about when they were in our shoes opening for a bigger band and how bigger bands can often be rude or dismissive but they've been really conscientious. It's awesome.

Going back to your music, what's your typical songwriting process? Everyone writes so differently, when I talked with Sam Ray he talked about songs that came together over months and also songs that just popped into his head before he even touched an instrument.

AG: It's pretty similar to Sam's, honestly. I'll have a riff or something and I'll play it over and over and record it and layer shit on top of it. It's probably just like Sam's! Sometimes it'll take me a really long time and I'll be dissatisfied with it constantly until it all comes together and then other times I'll just have an idea that comes to me while I'm walking down the street or something and I'll just get it out as quick as possible.

Are there any songs that jump out to you as examples of the latter? Songs where you just minding your business and suddenly this song jumped into your head and you had to get it down?

AG: This one's from the album before DSU, but "People," that song. I was singing that melody, those lyrics as I was walking around the block and then I rushed home to record it.

Since the very beginning of your music, there's always been this notion of heavy layering and careful structuring in your songs. It's never just you and a guitar. What gravitates you towards making such densely layered songs?

AG: It's really satisfying to me. That's probably my favorite part - to layer shit on top, harmonize different guitar parts with each other and to orchestrate all that. It feels really good. It's like when you're jamming with your friends, so I just do that. I do it because I think it sounds good and it's really enjoyable.

There's always been a focus on animals throughout all of your music. As a listener it seems like you use animals frequently as metaphors for people and your relationship with them. For example, on Trick alone there's "Animals" and there's "Whale," animals are littered throughout your music.

AG: I think I just like the imagery a lot of times. I don't know if I have anything deep to say about it other than the fact that I like the dysfunctionality of a person that has a really - I like the really one-sided relationship between humans and animals. I think that's something interesting to write about. Like in "Animals," the speaker is kind of obsessively devoted to this dog and from an outside perspective you know that the dog is just a dog. Different aspects of that appeal to me. "Whale" I can't really say much about because it just sort of came out. I wasn't thinking much about it.

There are a lot of songwriters who write from a largely autobiographical view. You've mentioned a lot that the people in your songs are a character or a speaker even if they have your voice. What makes you tend towards that style of songwriting?

AG: I think there's things that I experience that I want to capitalize on but there things that I couldn't write a whole song about. Who's the guy who wrote "Grotesques?" Something about Ohio? [Winesburg, Ohio by Sherwood Anderson] It's a cool philosophy that I kind of copy where it's certain aspects of human beings that are blown out of proportion in this one character to make a stronger impact with your writing. Technically all my writing is autobiographical because I'm writing from my experience but I'm reluctant to come out and prove it, you know what I mean?

You're reluctant to put yourself into the songs as yourself?

AG: Yeah, and I just would hate to hurt someone's feelings. I would hate for someone to hear something and know that it was about them.

You were in Philadelphia when you started getting bigger and were playing shows around Philly. What do you think about Philly's scene?

AG: I think Philadelphia is really cool as far as the fact that there's a ton of artists and it's really supportive and critical at the same time. It kind of forces you to make something worthwhile. But people are also extremely positive about whatever it is you're doing. I guess those are two opposites but they somehow combine in Philly. It seems like that's the reality, there's a lot of good music that comes out of there.

Any Philly bands you recommend?

A lot of people who write about music use the place a band comes from as a shorthand for what they sound like when that's not fair at all. Do you feel lucky that you didn't get too closely affiliated with that Philly scene?

AG: Yeah, I think I get frustrated sometimes because - like everybody who's trying to make music or art in general has to deal with getting lumped into some shit. I get lumped in with a lot of genres that I don't associate with. I don't think they're bad, I just don't associate with them. I used to get grouped in as an emo musician and there's the whole bedroom-pop thing, and it's all cool but I'm just trying to do my own thing. I'm trying to make something that's unique. Obviously everyone's trying to do that and it's nothing new for me to be frustrated by getting grouped in. I'm not special.

You've always been super prolific. I know DSU just came out and you've been non-stop touring but is there any news of new Alex G stuff coming soon?

AG: I'm always trying to hash out new stuff. I know my next release is gonna be an album I just don't know when it's gonna be. It'll probably be next year some time, but I don't know. I have a chunk of new songs. It's been harder to be as productive because I've been on the road so much but when I have the chance I'm always recording and trying to figure stuff out. So definitely... I'm still doing it.

Also, Cymbals Eat Guitars' upcoming run with Brand New (which unfortunately does not hit NYC) has now added Foxing, making for a rock solid triple bill. Here's an updated list of their dates...