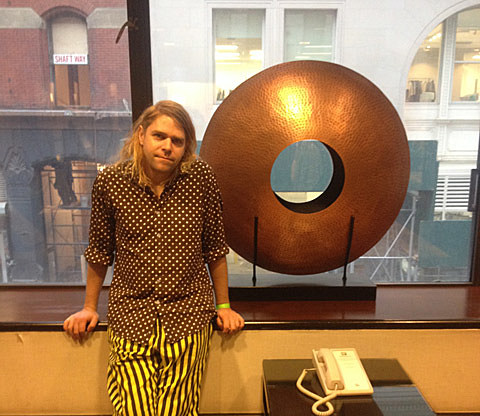 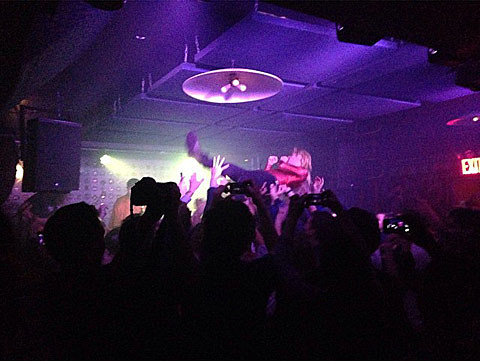 Ariel Pink may have dropped the "Haunted Graffiti" from his name but remains resolutely idiosyncratic on his new double album opus, pom pom. At times chaotic, somehow Ariel pulls it all together in a manner only he would. Fusing what feels like multiple songs together into one coherent thing seems like a huge pain in the ass but here we have Ariel referencing everything from Devo-like lunacy to the drama of King Diamond to the earworm madness of commercial jingles. Some brains just work that way.

Ariel was in NYC earlier this month for a beyond-packed, scene-of-all-scenes, post-midnight show at Baby's All Right. Though Madonna was nowhere to be found, the audience was a crazy who's who of Brooklyn music, best represented by the trio of DJs for the night: Pitchfork's Ryan Schreiber, 285 Kent/Palisades/Webster Hall booker Ric Leichtung and Baby's' own Billy Jones (who was also celebrating a birthday that night). Sky Ferreira, Mac DeMarco, members of Real Estate, John Norris and Marnie the Dog were just a few of the familiar faces who came out to see Mr. Pink and drink Pink Babies at the intimate Williamsburg show. Featuring mostly songs off the new album, the late late late set showed off the breadth of his vision, from the totally out-there "Dinosaur Carebears" to album-closing highlight "Dayzed Inn Daydreams."

Ariel was still or back in NYC because apparently he just visited the kids of PS 22 in Staten Island to play some songs with them (they famously covered him a few years ago). Stay tuned for the video of that to surface.

One day before the Baby's show, BrooklynVegan interviewer Jessica Pilot visited Ariel Pink at his hotel. Here is their conversation...

Ariel: You're making me think way too hard already. [laughs] I mean they all have their own stories.

Jessica: Is there one in particular that you think would make a cool story?

Ariel: Let me think about it for a second.

Okay, easy: none. I don't have any favorite colors whatsoever. I've got a really long-winded explanation for it too. I'm colorblind, but that's not the reason. I'm one of the least artistically minded people you've ever met. I have no aesthetical preferences for anything.

It's the truth! Despite my wonderful wardrobe and attire, I actually have zero--it's only because people leave good clothes at my house that are very stylish themselves. I actually don't have a favorite color. I don't think in color.

Let's talk about your new album. What's changed for you?

The cast has changed. The members in the band were different this time around, it was a different process. I decided to include whoever I wanted to include at any given point, there's lots of guests all over the record. There's Jason Spaceman, there's Soko, there's Piper Kaplan, there's Jorge Elbrecht, there's Don Bolles all over the record, there's all sorts of people all over the record. That's a very... The band was not my concern on this record. The music was first and foremost what I was concerned about as opposed to in the past. The past two records were more centered on including everybody that was already in the lineup, you know? This one I sort of just spread it around. Some people were available, some people weren't.

I took my time on this record, which was the biggest difference. I only did it in my downtime and I had other work in between that kept me afloat at that time. In the past we'd sort of block out a chunk of time and rush through the recording process in order to put us back on the road where we can make money again. So that's--This record I didn't concern myself about too much. If I would have never came out with a record I would have been perfectly happy doing that.

Yes, I absolutely enjoyed the process this time.

Is it still fun for you to play live shows?

Absolutely, and I make money from it. I love traveling, it's a really good excuse to travel and go to places I normally wouldn't go. I love the attention, soak it up. I recommend it to someone who doesn't know what they're going to do with their life and that kind of stuff, I would say: "Learn an instrument, join a band and do good." Spend two years doing it and you'll have a whole new lease on life. It's really the best way to make a living.

What was your first job?

Working at a record store, Second Time Around, in high school. I bought Hysteria by Def Leppard, Guns & Roses' Appetite For Destruction.

When do you get mostly inspired?

I get inspired at all times of the day and apropos of nothing.

Influences, inspiration, artists that you think we should look out for? And how would you describe your own music if you could?

Hipster garbage is one way I describe it. Retrolicious was another thing, chillwave, hypnagogic pop, I would say indie lo-fi and acid pop or something like that. These are just things that other people have called it. I call it--it's a very oldish form of writing music. There's melodies and a beat, that kind of thing. I think of myself as an artist, obviously, and not a musician.

Do you consider yourself a cult artist still?

Cult? No I don't. I see myself as mainstream.

How do you feel about that?

I think it's very ironic. But it's cool because I can't--I'm forced to be myself. To be less of a weird--I can't see myself as being a sort of cult artist anymore or being underground which was a temptation in the past. Now I feel like I'm a whole lot less weird to the world now then I was when I first started and it's good because I haven't compromised anything to be that. The world came around to me, so I'm really excited about that.