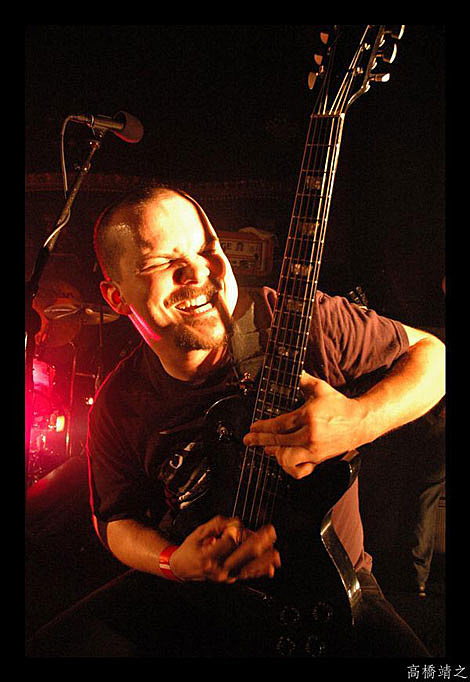 Scion Rock Fest in Atlanta is TOMMORROW (Feb 28th), but until the opening tones of Kylesa's guitars, we'll present a series of discussions with some of the key artists taking one of the four stages at the Masquerade. Monday we spoke to Scott Hull of Pig Destroyer and Agoraphobic Nosebleed, Tuesday meant CT of Rwake, Wednesday equals Jacob Bannon of Converge, and Thursday was Kat of Salome/ANb. In our final interview of this week, we are talking to Steve Brooks of Torche.

Nachtmystium, Disfear, Leviathan.... there were a shit ton of great records that dropped in 2008. Each had their own de/merits, but my conclusion was simple: Torche's Meanderthal was the best album of the year.

Torche emerged from the ashes of Floor, one of a number of notable bands that form the basis of the southern crew (Cavity, Shitstorm). Robotic Empire did the honors of their first LP, as well as the critically acclaimed follow-up, the In Return EP which hinted at the "thunder-pop" direction to come. Released in early 2008 on Aaron Turner's (Isis) Hydra Head imprint, the Kurt Ballou-produced Meanderthal followed. Cheers and massive touring ensued with the likes of Pelican, Boris, The Sword, and others. Unfortunately, along with the acclaim and the odometer clicks came the departure of guitarist/founding member Juan Montoya in the tail-end of last year, prompting the band to remain as a trio.

That brings us to today. Torche are 24 hours away from burning the main stage at Scion Rock Fest to the ground. We sat down with Steve Brooks (Vocals/Guitar) to discuss plans for new material, what kind of hours they are planning to log in the van, and the recent departure of Juan Montoya.

Meanderthal was lavished with tons of praise upon it's release, and it was my favorite record of last year... Are you surprised with the reaction?

Of course I'm surprised. All we can do is write whatever makes us happy and hopefully others will dig it. Working with Kurt helped a great deal. Our previous releases were self recorded, so it was nice to have an outside ear help guide us with Meanderthal.

You recorded some new material for the upcoming 12" for Hydra Head. Is there any material that didnt make it on to the 12" or Meanderthal that you are working on for the next release? When can we expect a new record?

The two extra tracks on the 12" EP were written and recorded in a few days last September before we went back on tour. We did a few covers too, but decided not to release 'em. We discovered playing other peoples songs aren't our thing. We prefer the original to any covers we attempt to do. haha. We're currently writing material for the next LP, which will be out sometime next year.

What were the circumstances behind Juan Montoya's departure? Amicable? Creative differences?

It was personal and professional between Juan and the other members of the band. So, unless you're in the band or touring with us, most people wouldn't understand. Our relationship with him was unhealthy, so we let him go. Juan's a talented and lovable guy otherwise, so we hope he finds a band that's more on his page.

You have said that Torche will carry on as a trio. Is that permanent? Will you eventually add another guitarist? What about live?

At the moment, we're a 3 piece and it's working out really well. Who knows if we'll eventually add someone else. The 3 of us want as little complications and drama as possible, so adding another person to the mix is the last thing on our minds. The only set back is we won't be able to play certain songs due to the guitar arrangements. Not a big deal, we'll do other stuff.

When you aren't on tour or in the studio, do you have a day job? If so what?

I had a day job, but due to the little time I have in between tours, it's hard to keep a job. Touring is pretty much getting us by at the moment, thankfully to the people that purchase our records and merchandise at shows.

You have already lined up a few dates with Dredg in 2009, any more touring in the near future?

Yes, we're planning a European tour w/Kylesa in June and another US tour this summer.

You have done your share of time in the underground metal scene, between Torche, Floor and Cavity... I am sure you have seen many amazing bands that never found the audience that they deserve. That said, what are some bands past or present that you feel haven't gotten their due?

There's so many greats, past and present, that are still undiscovered. Who knows why they didn't get their due? That's what so great about the internet now. You can find anything from the past that's impossible to track down and hear new bands that haven't been touring long enough to get discovered. 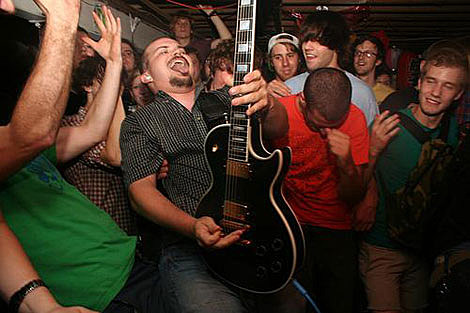 Well, I'm friends with a lot of bands playing that show, so i'm hoping to see all of them. I know that an all day event like that will kill me in the end. We'll probably be there around 8 or 9am and the show ends around midnight. FUCK!

Thanks to Steve, Derek, and Hydra Head!