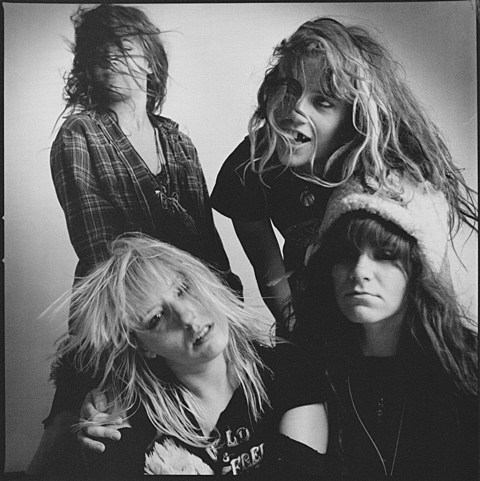 One of the Grunge Era's most notoriously confrontational and outstanding acts is back on tour and preparing a documentary of the reunion. We recently caught them at Riot Fest in Denver, and they'll be playing the first of two NYC shows tonight (9/8 at Irving Plaza, and then it's 9/9 at Warsaw). Hellacious and just as heavy, L7's legacy is familiar to many bands that hailed from the West Coast's early 90's offering of angst and post-baby boomer generation's utter disillusionment with society in general. For vocalist/guitarist Donita Sparks, the reunion is a recognizable place for the group but also one that brings along with it some humbling and amazing new developments. In a recent conversation, Sparks spoke of the band's reunion and why timing is everything.

BV: What was it that made this the right time for you guys to get back together and do these shows after all this time?

Donita: I don't know if it was the right time. It was probably the wrong time because so many other bands are reuniting at this time. [Laughs.] Sometimes we get lumped in with other bands, but this really couldn't have happened for us before this time. We've had health problems in the band. We've had some of us taking care of elderly parents. So this is really the only time that this could've happened for us. It just so happened that when I called everybody about a year ago and just said, "Hey, is this something you would even be slightly interested in," I got the go ahead from some of us, but Suzi [Gardner] needed time to think about it. So I told her that I needed an answer in about six months, because they had to start booking stuff, and she said yes. But it took a while because she hadn't touched her guitar in about fourteen years or something. It had just been under her bed. [Laughs.] So it wasn't just a matter of hey, do we wanna do this. It was more of us saying, "Can we do this? Is it even possible?" So yeah, here we are.

Just in the brief time you've been back at this and prepping for the tour, have you noticed significant changes in music culture and even the industry that weren't really there seventeen years ago?

Donita: Well, when we disbanded, our popularity had seriously waned, and it was really just the diehard fans that stuck with us, which we're thankful for. Now we're seeing people our age and really young teenagers at these shows just going apeshit. What's so cool is that I think the social media aspect has turned all these kids on to us. Our diehard fans had been posting stuff on YouTube like interviews, songs, and it really kept us alive even though we felt we'd been forgotten about by the media sort of like our legacy was buried by other sort of spokespeople of the era. The fans were so amazing that they kind of archived us digitally for years in our absence, because we weren't doing it. And then certainly through this Facebook page we've had for about a year-and-a-half, the numbers just grew and grew as I was posting things that I was already digitizing for the documentary. The fans were really the catalyst for this. We're not on a record label. We sort of have a manager but it's really more of an acting manager. There's no machine behind this. [Laughs.] It's just us. We're playing to bigger crowds than possibly we ever had at our peak. This seems bigger somehow. It's pretty wild, but who knows how long it will last. [Laughs.] 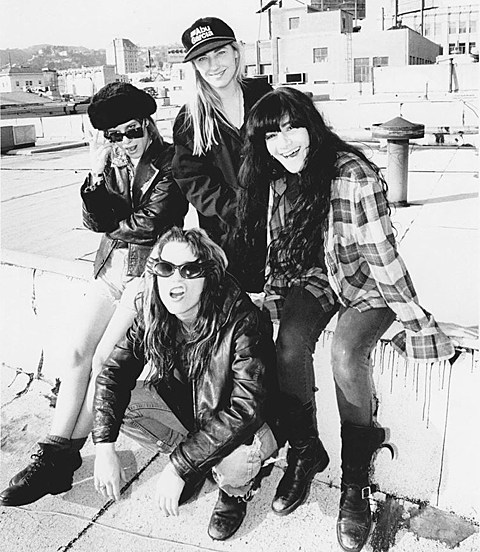 You mentioned Facebook. Do you see that sort of inevitable relationship between bands and social media as presenting a whole new set of obstacles for musicians and artists now?

I think social media is really cool, but I think there's too fucking much of it. These bands have tons of sites and just the upkeep of everything staying current I can't imagine. I know there are gizmos where if you post to Facebook or Instagram it'll post to all your pages, but it just seems like a lot of fucking clutter. A page or two is brilliant, but when you've gotta have all these things the upkeep just seems time consuming. I've actually taken care to curate our Facebook page, and I'm very thoughtful about what I post. To me it's almost like an art piece. Not to be highfalutin about it or anything, but I treat it as such. This is how I want this presented. I'm not just throwing shit on the fucking wall. I think a lot of people are just posting things, and it's like - why are they posting this?

Aside from the music, one thing L7 and so many of the other bands from the Grunge Era were known for was the unabashed social activism you all took on and not just in rhetoric but in your actions. Is that activism something you've seen erode or at least its dynamic change since then with musicians now?

I'm not all that in touch with what's going on out there. I'm not really aware of any sort of organizations backed by particular bands. After we had Rock for Choice, the Beastie Boys had Free Tibet, and bands were sort of inspired to use their popularity to give back. I don't know if that's going on out there, because I'm not paying that close of attention. I hope it is, because it's certainly needed. Are there any bands sticking their necks out for anything now? We stuck our necks out, and it's interesting because the bands who do that actually get a little more shit than the bands that don't, because then they're called to task about every political thing. You'd better be a Straight-A, politically correct student all the way down on your report card, or you're gonna get shit. I know that we did. If you look at artists from the 80s, they were involved too. I'm not saying this lightly, but they did indeed help end apartheid. It was because of those artists drawing attention to that heinousness going on down there that teenagers knew about apartheid. I didn't know about apartheid until that. At first there was a single that came out called "I Ain't Gonna Play Sun City" and the big benefit concerts put on, and then Live Aid, and all of that stuff. I mean, they stepped up too in the 80s. I don't know who's stepping up now, but that shit does make a difference. It can change the world at least for a while. I don't know. I find millennial kids to be very socially aware and PC, but I don't know who's stepping up to actually get organized.

You've had your own solo work as well as soundtracking and other projects. Are there plans for more of that in the future?

I think I'll do other projects for sure. I've been kind of in the muck of L7 for the last couple of years just digging stuff out of storage. [Laughs.] I've just been in L7 world, and it started out really being a drag. It was just like going down memory lane every fucking day going through old photos and stuff. It was depressing like fuck, I'm living in the past, and this is really fucked up. [Laughs.] Then out of that came a director who was interested in doing a documentary of the reunion thing, and then lo and behold we're doing a reunion, which I thought would never happen. I never even really wanted that to happen, but it just sort of did. I'm hoping to shift into some other musical projects and other projects once the dust clears a little bit with this L7 stuff. People ask if we're gonna do another album. I don't know if we're gonna do that. I don't really have a desire to do that right now, but you never know. We have a lot of fun hanging out with each other these days in the studio.

Seeing the videos for these most recent live shows makes it seem like L7 were just taking a really long break. You guys look completely comfortable. Was that camaraderie something that came right back? Do the songs have different meanings to you as musicians now after this much time?

Some of it is like putting on an old shoe, but I think for me there's an awareness that a lot of these songs mean a lot to these people. They're life anthems. People of course like many bands in their youth, but they've always got a handful that they're really apeshit over. I know that for some of these people we're one of those bands, and so I think we're treating the songs with more respect than we ever did. I think as time went on with the band we started getting really flippant about our material, and we would have a lot of hijinks going on during our songs. Now I just think we all feel a commitment to really deliver these songs because they mean a lot to people, and that in turn means that it means a lot to us. It's like we're both participating - the audience and us - in this moment of twenty years ago that is still somehow relevant today, and we're very grateful for that.