DOWNLOAD: The Soundtrack of Our Lives - Thrill Me (MP3) 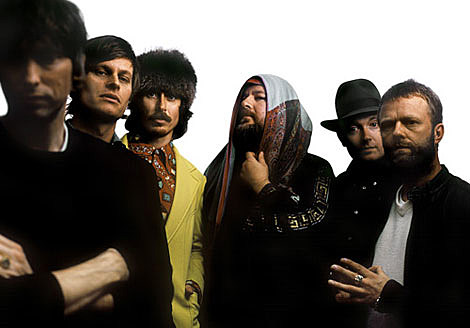 Sweden's premiere psych-rockers The Soundtrack of Our Lives are in the U.S. this week, playing a few dates in support of their sixth album, Communion, which just came out on Yep Roc. This includes two NYC-area shows and both shows still have tickets -- Music Hall of Williamsburg on Wednesday (3/11) and Bowery Ballroom on Thursday (3/12).

A sprawling, 24-track epic, Communion is surprisingly filler-free and the best thing they've done since 2002's Behind the Music. (Amongst the original gems: a genuinely inspired cover of Nick Drake's "Fly.") You can listen to the whole shebang at Yep Roc's website and you can download the Stones-y "Thrill Me" above.

Apart from a NYC date in 2007 and SXSW, TSOOL haven't toured America since the release of Origin Vol. 1 in 2005. If you're never seen them before, TSOOL are masters of Rock Moves, from the windmill to the stick twirl but manage make it seem like they invented them. (Much like their sound, which is a condensation of the great rock bands of '68 - '73.) Easily one of my favorite live acts of the last 10 years.

Singer Ebbot Lundberg and guitarist Mattias Bärjed answered a few questions via email. And all U.S. tour dates are at the bottom of this post.

Communion seems to have an energy that maybe wasn't completely there on Origin Vol. 1. I know much of this was recorded quickly but what else was different this time?

Ebbot: You´re absolutely right about this. Origin 1 was a hasty compromise. I think we were a little bit too exhausted. That's why we decided to split it up in 2 parts because of deadlines and endless touring. Communion just came about very naturally because we (or anybody else) did not have any expectations. And everybody was relaxed during the recording process.

Apart from Origin Vol. 1 all your albums have been double albums, but Communion is a full-on double CD. Yet I get the feeling there were probably even more songs that that didn't make the cut. Do you guys ever have writers block?

Ebbot: Yes about six songs did not make it. The music is not hard to make but the lyrics can sometimes be hard to find. If we have writers block on something we just let it go for a while to pick it up later.

What happened to Origin Vol. 2? Did any of those songs end up on 'Communion'?

You've done covers before when playing live (Love's "Signed DC," The Stooges' "Sick of You") but never on an album. What made you decide to include Nick Drake's "Fly" on Communion?

Ebbot: Because nobody ever did a Nick Drake song like this. (But I may be wrong.) Most people never even want to touch that subject because Nick Drake is a holy ghost. We just liked the demo version of "Fly" and thought that we could produce it better than John Cale. Or at least give it a try.

Question for Mattias: You wrote and recorded the music for Upp Til Kamp in between Origin Vol. 1 and Communion. The music was integral to the miniseries -- what was that experience like? And did it affect how you approached songs for Communion? Also, any projects like this in the future?

Mattias: Upp till Kamp is one of the best creative experiences I've ever had. It was really interesting to work with such talented people as Mikael Marcimain and screenwriter Peter Birro. I guess I was lucky, UTK being the first time I worked with film. It affected my whole relationship with TSOOL and gave me some perspective on our past, present and future. It made me have a relaxed approach, working on the songs on Communion. I've done some more score music for a tv series called Familjen Babajou (to be broadcasted April 2009). And I'm looking forward to doing more.

Who puts together the live setlists? With so many songs to choose from , it must be difficult putting them together.

Ebbot: I mostly do because I sing. But it's always a problem when you have many too many songs you wanna play. So we try to make different setlists every night.

Mattias: We usually discuss the show's set list during the soundcheck. It's fun to change the set list every show. At the end of the night, we have something we call "the jukebox." The ones in the crowd who screams the loudest for their favorite song gets to hear it -- if we still can remember it.

The last time you played NYC (April 2007 at Mercury Lounge) it was a two-and-a-half hour marathon. What can we expect on this tour?

Ebbot: Maybe not that long though I wouldn't mind. At least about 1 hour and 45 minutes I guess this time.

I have to ask about Communion's cover art. Like who are they and what are they drinking?

Ebbot: Suicide drinks. They are on their way back to Sirius or Orion. These people represent the alienation. The fruit of corporocracy. The living dead. 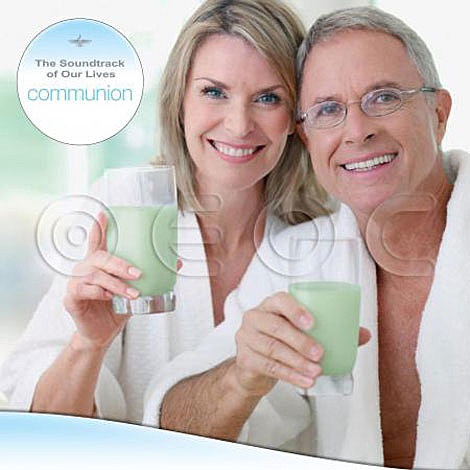 The Soundtrack of Our Lives - "Fly" (Nick Drake cover)

The Soundtrack of Our Lives - "Sister Surround"