"There isn't any artistic integrity in just getting the band back together
and playing the old songs." 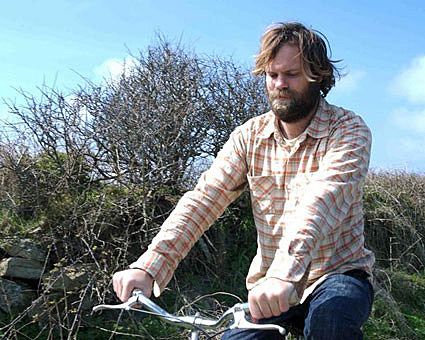 Neil Halstead, as a co-founder of Slowdive, was one of the architects of shoegazer, a genre that has seen a revival as of late with the reformation of My Bloody Valentine and Swervedriver. In 1995, most of Slowdive morphed into Mojave 3 and has since been making beautiful countrified dream-pop. Halstead also mellows things out more on his solo records. His sophomore release Oh! Mighty Engine dropped last week on Jack Johnson's label Brushfire Records. He is also currently on tour with Jack. (yeah, we know).

This Sunday he opens the third day of the All Points West festival in Jersey City - the same day Jack closes. You can also catch Neil one day earlier at the Surf Lodge in Montauk. We caught up with Neil after he opened the second day of the Osheaga Festival in Montreal on Monday. We discussed tour mate Jack Johnson, a Slowdive reunion, and the re-emergence of shoegazer.

You've played a lot of festivals in your twenty year career. How does it feel to open a festival?

Neil: It's a dubious honor, isn't it? [laughs]. I would trade in the honor for a few more people. But the people were really nice. Very sweet. We enjoyed it.

You've been opening for Jack Johnson on his tour. How has that been?...

We've done three shows for him so far, and it's been great. What he does is pretty mellow and what we do is pretty mellow. We're not world's apart so it works pretty well.

I've heard that to be an artist means having to constantly prove yourself. Your career has influenced a lot of bands yet you're now in a position where you're playing to thousands of people who don't know any of that. What are your feelings, if any, about that?

In some ways, it's kind of a relief. For over fifteen years I've been pretty much playing to the same people. It's nice to go out there and play to a bunch of people who have no idea what you do and no concepts about the music. Just an open mind. Just kind of appreciate you in that instant. I enjoy it and in some ways it's a new challenge. Being on Brushfire [Records, his new label] is a new challenge. They have a different take on music. They make surf movies and yet they do music as well.

Did they approach you or did you approach them?

I've been friends with Jack and his manager, who runs the label for quite a few years. There has always been an option to do the record. Up until last year I was under contract with 4AD so I never had the chance to do something with them. This year, they said come out and use the studio and if you're happy and we're happy and maybe we'll consider putting the record out. I went out two weeks and had a really nice time and recorded pretty much the whole record and a few more and kept it real simple. Some out of necessity and some because I wanted to keep it a really basic records. I didn't want a lot of overdubs. 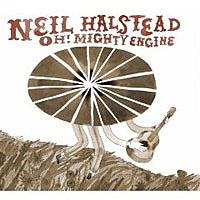 I haven't heard the new record yet.

I just got my first copy yesterday. Honestly, I haven't had a copy the whole time. That's the weird thing touring with Jack. It is a big business. I went to the merch table and asked if I could grab a couple copies of my CD's because I haven't had any and the guy was like "no, I can't give them to you." I said "what do you mean you can't give them to me?" There's a whole industry that I'm just not used to.

How would you compare this record to your last record?

To me, some of the themes are slightly different. It's certainly more lighthearted. And it terms of sound, it's more stripped back but I'm sure when people listen to it they think it sounds like Neil Halstead record [laughs]. I'm probably like most musicians here who...you know, they change something a little bit and think it's a really big change and everybody doesn't notice.

Do you ever see yourself going in a very different direction or a one album experimentation with another sound?

I think it would be nice to do a record like that, where you actually confound people. I would love to do that. Whether I could do that...I don't know. I know it sounds totally corny but to me, it's like a journey. It's hard to actually know what's around the corner. I think the idea of taking a concept and making an album around the idea of a concept it totally alien to me but it's something that is done in a lot of the music I like. So it is possible that something like that could be done at some point.

Now are Mojave 3 still on 4AD?

Our contract was for five albums and it came it to an end. Puzzles Like You came out in late 2006. We haven't figured out what we're gonna do. Ian and Al are in a band called The Loose Salute and they've been pretty busy this year. They got a record that just came out. Pete Greenwood just put out a really beautiful record. Everyone's been doing other little things. We thrown a few ideas about. When it comes to doing a record, we'll probably do it ourselves and decide on a label or release it ourselves.

I know with the reunions of My Bloody Valentine and Swervedriver you have been asked about a possible Slowdive reunion. I have read in a few places your thoughts on it [answer: not very likely], so I'm curious your thoughts on being asked it so much?

If people are interested, then in some ways it's quite nice. It's not like I don't like Slowdive. I'm perfectly happy to talk about Slowdive. I have other fish to fry at the moment. It doesn't bother me that people ask about it.

Has anything come along or been talked about, Slowdive related?

So it's just something that will never happen?

I just don't see the point. There isn't any artistic integrity in just getting the band back together and playing the old songs. Not that it wouldn't be fun. I'm sure there would be a certain amount of enjoyment in it. While I still feel like I have some creative energy, I would rather use it. 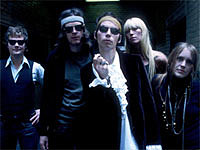 The last year to eighteen months has seen a resurgence in the shoegaze sound. What are your thoughts on that?

I don't know. Before it was even called shoegazer, it was just a bunch of bands wanting to experiment with sounds and use guitars in a slightly different way. It didn't really conform to what was traditionally seen as a rock band. I'm sure there are bands out there doing that, and if you want to call them shoegazer, fine. In terms of a bunch of bands that just sound like Slowdive or Ride, then I suppose I wouldn't be all that interested in hearing them. I like Serena Maneesh. I think what they do is interesting. To be honest, it isn't something I really follow.

What I always found fascinating about that first wave was that most of those artists broke off and moved in disparate directions like country/folk and post-rock and trip-hop and still maintained their own sound, to some extent.

I think that definitely as kids...for me, it was about discovering sounds and listening to music in a different way. I've always been a fan of Dylan and Neil Young and The Beatles. There was a point when I suddenly got the idea of a Leonard Cohen or country music. But up until I was 24, I didn't really want to listen to country music. Then you hear The Flying Burrito Brothers and go "that's fucking cool" and then Gram Parsons and all of a sudden you're back to Hank Williams.

Yeah. It totally is. You jump in and it takes you somewhere and that's what's lovely about music. The first time I ever heard The Jesus and Mary Chain it was fucking great. And then you read a review and they mention The Velvet Underground, so you go "fuck," like there's this little trail [laughs]. It's brilliant.