Help me welcome interviewer Mike Chadwick to BrooklynVegan. Mike was supposed to get together with Carey Mercer of Frog Eyes at their May 20, 2006 date in Montreal, but that show never happened so they met up at the rescheduled show a week later.... 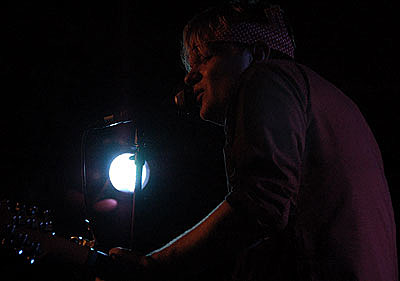 Carey: Sorry about the Montreal thing.

Mike: It's not your fault. What was that about anyway?

Carey: For this tour, we were kinda jumping back and forth between the border. When we tried to get back in, we found out the visas we had that we thought were good for a year were actually only good for six days. To get another one would have cost us three thousand dollars. So, we kind of had to make a choice. It was a really tough decision to cancel the Toronto show. We rescheduled the Montreal show, though.

Mike: I saw some pictures from a last minute show you put together and there was no one there?

Carey: Cleveland? Yeah [laugh]. That was a pretty good show, too. It was fun, but I hope something like that never happens again.

Mike: A few of the reviews I've read about the albums have referenced David Lynch. Where do you think people make that connection?

Carey: I don't know. I guess people have to put a name to what we do. I mean, I like his movies and the composer he works with….?

Carey: Yeah, like, I like the music he makes, the compositions that go along with the movies, but I don't think [Lynch]'s movies really play a part in our sound. Maybe only so much as good art motivates to make art of your own. I've never really though about it.

Mike: I have also read that the first three albums were a kind of trilogy

Mike: Okay. I was gonna ask how the new album would fit with the other albums

Carey: I don't think people will hear any difference between the new album and any of the others. Those last three albums dealt with a lot of the same themes, and the new album with deal with some different themes. I don't want to give the impression to anyone that they have to listen to all three to get the "complete" picture or that if they didn't listen to this album then the others wouldn't make sense. That wasn't me.

Mike: Do you think people make too much about how "different" Frog Eyes is?

Carey: Perhaps. I think we are a really simple band, to tell you the truth. Each of us has our own place within the music and it all works out. Playing with Spencer, too, with his discordant composition background, he incorporates that. With his other band, and this isn't a diss at all, but they are more melodic. To my ears, he doesn't support the melody, he introduces something that runs beside that, which I think is awesome. If we could make "normal" sounding music, than I think we could get a bigger audience, but I don't think we are capable of that.

Mike: Do you think there is a cap or a limit to Frog Eyes potential fanbase?

Carey: Yeah, of course. I hear a lot….well, not a lot, of testimonials from people who said the first time they heard [us] they fucking hated it. Then, something happened and they grew to like it. So I think we should just plug away and win those supporters, one by one. The only positive thing about the band in terms of making a living or whatnot is that we seem to keep our fans, you know? I think Xiu Xiu is another good example of that. He doesn't sell a hundred thousand records but the fans he does have buys it all, you know? That is really awesome. We both exist in a no man's land, sometimes, between noise and pop, you know what I mean?

Mike: How do you feel that your contemporaries name check you as an influence? Xiu Xiu and Wolf Parade have mentioned in a lot of press how the Frog Eyes sound has shaped their work.

Carey: It feels nice. It doesn't feel weird or anything because I don't look at those guys as gods. They are friends. Like, If I was reading an Otis Redding biography and he was like, "Oh, by the way, my favorite band is Frog Eyes" [laughs]. I would be like "that's kind of weird" [laughs].

We just exist in the same space. My big thing is that I think the life of someone that makes art…you're essentially lost in a kind of trackless weight. And you can't ever follow anyone else's track. Not Spencer's, not Dan [Bejar]'s, not Nick Cave's, you know what I mean? Your taste is very individual.

I like it when people like my music but what I mean to say is it's not especially more nice because Xiu Xiu, who is a dude I totally respect, he's really fucking cool, or Spencer, anyone, likes what we do. It's not like I value an artist's opinion more than anyone who comes to our show. Having an opinion about contemporary indie music is not like having an opinion on the particulars on the Middle East conflict. You don't have to be a practitioner to enjoy it.

Mike: Now is Spencer still a part of the band?

Carey: He is playing with us every night on this tour. Spencer plays with us when he can, and when he can't we have a pedal steel player. There is also a guitar player we use sometimes.

Mike: What should we expect from Thunder Cloud? Is that the name?

Mike: Is Thunder Cloud the name of the album?

Carey: We don't know yet.

Mike: Okay. So where did I get Thunder Cloud?

Carey: We were gonna call it Thunder Cloud. We were originally gonna call it Swan Lake but then some people said "that sounds kind of gay," or whatever.

Mike: So, because Swan Lake was too homo you decided to go real hetero with Thunder Cloud?

Carey: Yeah. THUNDER CLOUD [laughs]. I had an idea. Do you know the Lion King? I don't even know if I have ever seen it, but there is this image of a lion in the clouds. I wanted to do that with us. So, we essentially wanted to name the band after a t-shirt idea [laughs].Dan wanted to call it Swan Lake so we decided lets do it.

Mike: Has there been any recording done?

Carey: It's done. We just have to master it.

Mike: In the context of your work, and Spencer's work, and Dan's work, is it a happy medium or does it lean to any one way? Or is it something different entirely?

Carey: The few people who have heard it say that it is really…weird. That it was trippier than they thought it would be. It sounds like we are pushing ourselves to have it not sound like a happy medium. Like, on some of the songs you can tell who wrote them, you know? I don't really know what to say about it, to tell you the truth, except that it was really cool to make it. A lot of fun. If people don't think they will like it then they shouldn't buy it.

Mike: Before I heard Notorious Lightning and Other Works, I was curious how it would sound. And when I did, I was surprised that it sounded a lot more like Destroyer than Frog Eyes.

Carey: That's the neat thing about songs is they really bear the imprint of the original writer, no matter what you do with them. With Swan Lake, I tried as hard as I could to remove that imprint, but it's still there. As much fun as it was to orchestrate that record, there is a real beauty underneath those songs that won't go away.

Mike: I read on that tour, you guys did two sets. Was it brutal or were you totally up for it?

Carey: Ah….mmm….it kinda sucked, yeah. I think we were really bad, honestly. A lot of our sounds were terrible. There was no dynamic. It was just too much, too. I think some nights we had good shows. I think the shows we did in Europe were good. It was kind of a massive undertaking. I had to take Destroyer songs and make them into Frog Eyes songs and have him sing them. And they weren't songs that necessarily worked in that environment. That was the challenge. I think if I had another shot at it, it would be real good. If we had a real environment. A band usually has more than three weeks to do all of the arrangements. We have our language and we do it well, but we're not session players, you know? I really liked playing with him, I just wish we had a little more time.

Carey: [shaking head no] Oh, man [laughs]. That would be like, what, eight hours? [laughs]. No, it would be just Swan Lake. The one thing I would say about [the Destoyer/Frog Eyes tour] was that I didn't save any energy for either band. We tried to do it as vigorous and real a performance as we could possibly do. It was just kind of weird for the audience. Before that, I don't think Frog Eyes played more than forty-five minutes

Mike: That first show on the must have been something, huh?