"The Stills are a Canadian indie rock band. The four band members, Tim Fletcher, Dave Hamelin, Liam O'Neil and Oliver Corbeil, have known each other since around the age of 12 and played in various bands prior to forming The Stills in 2000. The band members are art students from Montreal, Quebec. On a two-month trip to New York City, they recorded several songs with the help of a four-track recorder. After landing a record deal, they began working on an EP entitled Rememberese EP which was released on June 17, 2003. Their debut album Logic Will Break Your Heart was released later that year, and touring with Interpol and the Yeah Yeah Yeahs gained them a steady following. Their latest album, Without Feathers, was released May 9th, 2006 on Vice Records." [Wikipedia]

BrooklynVegan interviewer Mike caught up with Dave and Oliver of the Stills after their performance at the Osheaga Festival in Montreal on September 2nd, 2006. They discussed the new album, Land of Talk, Ratatat, and revealed the mystery behind the guy in the blue jacket at Siren.... 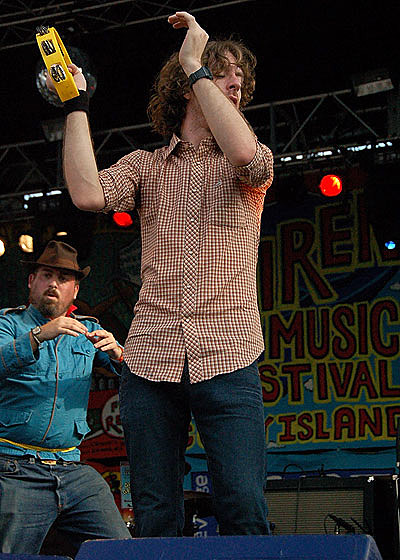 This wasn't the first time Mike interviewed the Stills....

BrooklynVegan Mike: I interviewed Tim around the eve of Logic and he spoke of how the second album will not sound like anything from the first album. And for the most part, that is true. So is the material that appears on Feathers in its genesis at that time?

Dave: Some of it, maybe. We knew we wanted to do something very different but we didn't know what. It was only later that we figured it out.

Oliver: It's hard to know exactly. Once you start fucking around with the songs and everything, it takes a sort of life of its own.

Dave: We never know what it's gonna be like until it's over. It could have turned out a million different ways, even with the same material.

BrooklynVegan Mike: I hadn't seen it, but I had read and heard first hand accounts of the band receiving a negative reaction when you premiered some of the new stuff. Is that true?

Oliver: At shows, it wasn't so bad.

Dave: There were a couple of hecklers.

Oliver: But it was minimal. I think it was more the media and the blogs.

Dave: So we put out a record, Logic Will Break Your Heart. So some people buy it, some people love it. We put out another one. Blogs are now this big thing. So all of those people are like, "The Stills. I love The Sills. I'm gonna review that record." Then they hear its differences and they are like, "OH MY GOD! I hate this record, rah rah rah rah." [laughs]. Basically, all of those reviews are from fans of the old record. You can just tell.

Oliver: Most of them start with, "Logic Will Break Your Heart, this MASTERPIECE…" Like, take it easy, it was a good record but….

Dave: Masterpiece? We got a 5 in Pitchfork. I'm reading all of this "critically acclaimed 'Logic Will Break Your Heart," like…one review opened with "The most deafening blast of mediocrity you are gonna hear this year." All of a sudden now, people pick it as a classic.

Oliver: When we put out our third record, they will say "Without Feathers, the classic record…."

BrooklynVegan Mike: Do you guys feel adversarial towards the first record because of the attention it gets?

BrooklynVegan Mike: I've seen you live a few times, the first behind this record, and I have always enjoyed how you toy with the structure of the songs. I was curious how you would reconcile the two albums on stage and it was very good. Will this be a constant for the band, no matter the sonic changes?

Oliver: The reason why we do that is it is really hard to play like a 150 shows a year and play the songs exactly as it is and actually look like you give a shit. You have to change it up, or else it's a lie. It's imposssible to play a song 570 times and still like "yeah," be really into it.

Dave: I think that's why you change your songs up live. That's why you hear people say, "I like them live better."

Oliver: And there are people who are like, "I'd go see them live, but I wouldn't buy their record." It doesn't make any sense.

Dave: I would actually rather hear a band on record then see them live. I think that most of them are shit, live.

BrooklynVegan Mike: I guess unless you are a band like The Strokes who refuse to change anything live. Whenever they play, it is by the note.

Dave: Yeah. I have seen them live but their records have a sound and an aesthetic to them. And like live sound is kind of like the same for everybody. There is very little subtlety going on there. I like the studio.

BrooklynVegan Mike: Do you guys feel it is an uphill challenge to convert people through your live show?
Dave: No. I actually think it is easier to convert someone live.

Oliver: In our case, I think so.

Dave: We are trying to get people into the new songs. Live, they kind of sound like they could have been on the last record. It doesn't sound that different, I don't think.

BrooklynVegan Mike: You guys just finished up a tour with Sam Roberts. Was it odd that he opened for you in States and you opened for him in Canada?

Oliver: [Sam Roberts] is really big. He's like platinum and half here in Canada. He's Captain Canada. The new Neil Young or the new Tragically Hip or something. He's a really big deal.

BrooklynVegan Mike: Was it strange to see him only get his half hour before you, but then jump the border and he's playing an hour plus after you?

Oliver: It was strange to see him open up for us on the East Coast. I thought it was funny.

Dave: We just think of it like, "hey, we're playing together."

BrooklynVegan Mike: And you picked Land of Talk to open for you on your West Coast tour. How was that?

Dave: Land of Talk is interesting. Liam, our keyboard player, plays in a jazz in this jazz sextet called the Snow Brothers. Actually, they are called Tempest Fusent, but I like the Snow Brothers better. The drummer from Land of Talk plays with Liam in that band. And the singer, Liz, actually sang a song on our record that didn't make it on the record....The guys in Land of Talk are really buddies of ours and they are a 3-piece. And it is really amazing that a 3-piece can make music like that with no hassles.

Oliver: No disrespect, but the best band that ever opened for us is Ratatat and they are just two guys.

BrooklynVegan Mike: Have you heard the new record?

Oliver: It's phenomenal. I love that band.

BrooklynVegan Mike: At the Siren Festival, you had some strange guy on stage with you playing tambourine if I recall. What was that about?

Oliver: The Great Belghazi. He lives in upstate New York and he makes weird films.

Dave: If you go on youtube and search Belghazi.

Dave: He is part of an art collective called Surface to Air that does artwork for albums.

Dave: Actually, he is a weird guy. He's a friend but he's really weird.

Mike interviewed Wolf Parade at the festival too.

The Stills are on tour.

Check out more photos of The Great Belghazi at Siren.