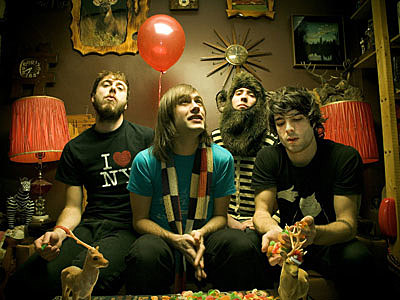 In just a few hours from the publication of this interview we'll know which Canadian band takes home the first annual Polaris Music Prize. Malajube is one of the ten finalists, and they're performing tonight at the ceremony. BrooklynVegan Mike caught up with keyboardist/vocalist Thomas Augustin backstage at the 2006 Osheaga Festival. They talked about the nomination and stuff...

BrooklynVegan Mike: I want to start off and apologize for some of these questions. I am sure you have been asked them a thousand times already but many of our readers aren't familiar with the band.

BrooklynVegan Mike: When did the band form?

Thomas: I guess it was like three years ago. It started at a few small shows in Montreal. At the beginning, it was three of the guys, now we have five. I joined just before our first album, , and it really started to pick up from there. Now we are making shows every week and then eventually many shows every week [laughs].

BrooklynVegan Mike: Now are you guys making enough in the band to quit your day jobs?

Thomas: Yeah. It took some time but now we are so busy with the music, and that's all we want to do. We make enough money. It's a good thing that we put our focus into making music. It's a great thing.

BrooklynVegan Mike: I just moved here a while back and I am amazed that standard of living, for a metropolitan city, is so small. It doesn't cost much to live here.

Thomas: No [laughs]. My rent is so low. I have had a chance to travel a bit with the band. Talking to people in London and Paris, and asking them how much they pay for their 1 ½ bedroom. It's way out there. We manage to pay our rent, which is not a lot. A very good thing.

BrooklynVegan Mike: As you know, there have been a lot of Montreal bands breaking out in the city. Do you guys feel singing in French has impeded that at all?

Thomas: I don't know because for us it has been so quick. It is going really fast. I couldn't imagine it going any faster. I am sure the language, even if we say "yeah., people from the states are interested in French music We are exportable," which is something I hear a lot, it would still be difficult to understand that. We have a chance with Malajube, because people get the music. Even if it is in French and people don't get the lyrics, the music does the work. It talks to people. For the states, I have big doubts it could work. But our album is coming out. We'll see how it works. It is publicly a different culture.

BrooklynVegan Mike: My next question is about that question itself. Does it bother you that people are going to ask you about the language thing for the next couple years?

Thomas: No. It's out language. We are comfortable singing in French. We have things to say and we want to say it in French. If people care about it and want to hear about it, they will do the work to find out about it. I think that right now for English speaking people French is a little exotic.

BrooklynVegan Mike: Now, in Canada, deciding to sing in French is a political act.

BrooklynVegan Mike: Have you ever had any problems dealing with English speaking promoters across the country?

BrooklynVegan Mike: Have you guys thought about why your band is the one to break out of the French speaking scene?

Thomas: I don't really know. I think it is because of the music. It can speak to anybody. Malajube doesn't have any center to the Quebec cultural folkloric. Most French singing bands here have that. English people can connect to it. It's quite strange because those bands could do that to if they wanted, but they don't.

BrooklynVegan Mike: Congratulations on the Polaris Music Prize nomination. There are a lot of big names on that list. Were you surprised to be nominated?

Thomas: Yeah. It was really strange to see our name on that list, with Broken Social Scene and Metric.

BrooklynVegan Mike: It was a little weird when I came here because BSS has a following in the states, no doubt, but they are huge here.

Thomas: They are a very good band. All of the bands on that list are good. It would be a big compliment if we are to win.

Thomas: Actually, yeah. We are touring until Christmas. And then we are gonna take a little break because…we have to write songs [laughs]. We are always doing shows now and touring is a bit of…a kind of…how do you say…there is a lot of warp zone for the brain. You are always waiting for something. It isn't very creative [laughs].

Mike also interviewed Wolf Parade and The Stills while at Osheaga.