Help me welcome interviewer Patrick Southern to BrooklynVegan. Patrick, a musician himself, responded when I put out a call for music interviewers two weeks ago. He mentioned in his email that his dream interview would probably be with Mark E. Smith from the Fall, so I helped arrange it. Mark and Patrick had a long distance chat on the phone this past Friday (June 23, 2006). They discussed the banana peel incident, his band leaving the States as he slept, Franz Ferdinand, the new record, and more... 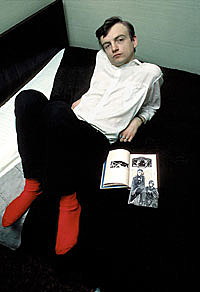 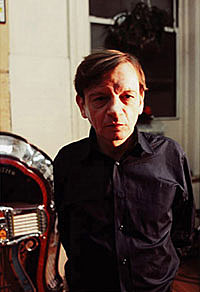 PATRICK: Do you think the American audiences that The Fall draws are any different, fundamentally, than the British audiences?

MARK: Well it depends where you go, really. In Britain, in the north, it's very fanatical. There isn't that great difference though, no. Not a great deal of people leave. (Laughter)

PATRICK: I actually saw you at the last stop of your most recent American tour.

MARK: In Brooklyn, you mean?

PATRICK: Yes, and it was my first time seeing The Fall.

MARK: Yeah, well it was a good show actually. It was really coming together. It's like a lot of tours, you're just getting it together and then it's over. But the group came over and we played Manchester about a week later and it was great. That was good for me because I was a bit worried about the new group getting it right in Britain.

PATRICK: Do you plan on keeping the new group around for subsequent tours?

MARK: Yeah, well, strangely enough, after they joined, we only did two gigs and then we were in the studio for ten days. So we've got quite a lot of stuff done actually. We're about half way there with the next record.

MARK: It is, I'm amazed really.

PATRICK: So, what happened with the singer from The Talk? Reports seem to vary.

MARK: Right! Ha-ha! Well is on the 'Net over there or something isn't it? I don't know. Well all I know is, I was in the middle of - I was just singing you know? And this guy... he didn't throw a Banana at me, he came on my left side and hit me very hard with Banana. I was really mad actually, because I didn't know what the fuck was going on. Especially, you know, when you get hit on the side when you're not ready for it... I was in middle of singing, you know what I mean?

PATRICK: So this was a full banana, and not a banana-peel or something like that?

MARK: (Laughter) Well that's the funny bit about it. [Mumbles something about a Banana] All I'll say is this: if it has been a half and inch lower, I could have been dead. I know that. You don't... erm... Oh, you know, he must have been upset. You see, I only knew the next day why he was upset. [The rest of The Fall] sort of left that night, you see. In the night, not telling me. That's why he did it, obviously, because he was upset because he thought the tour was over. I was the last one to know, as fucking usual. I just thought he flipped his lid.

PATRICK: Do you typically choose your opening acts?

MARK: Usually, I do, yeah. It's funny, because with this one, they sort of wanted to come on the tour. So we made a deal. They didn't pay us anything, but the deal was that they keep to themselves. The thing I'm annoyed about is that the British musicians [again, the rest of The Fall] obviously told him before they told me. That's the only thing I'm mad about really.

MARK: Yeah, it does, but it's all for the best.

PATRICK: Well, the openers you had in Brooklyn were great. I especially enjoyed Safi Sniper.

PATRICK: Now, about the new Fall band. Did you personally choose them yourself?

MARK: They haven't really played together. Two of them have a group called Darkness My Love, the bass player and the guitarist. But the drummer just knows them. He's never played with them, never mind me. But it just fell together very well.

PATRICK: What do you think of some of these bands that are around now, such as Franz Ferdinand, who are citing The Fall as an influence? It seems to me like a weird thing for a band like that to say.

MARK: Well it does to me too, to be quite honest. If I could afford a lawyer, I just might pull an injunction on them mentioning our name. Haha! I mean, if you're new to The Fall... a lot of these groups... I don't know what it is. I think a lot of these group use it to sound a bit hip. When I was a teenager, people used to say "oh well this group sounds a lot like this group", and then when you go and see them they sound like a pack of shit. They sound like the Talking Heads to me, and I'm not knocking them, it's just misleading.

PATRICK: Are there any bands out now that you think are particularly interesting?

MARK: Well, there's a couple of good groups in Liverpool. They've got a bit of an edge to them. They don't sort of walk the line like a lot of British group tend to do nowadays. It's a bit like The Talk, really. They sound like it's a business, in a strange way. I don't relate to that a lot. It's always, "thank you to my manager" and "thank you this,"
and it's not really the way I started the group. I've got some builders in my building, these guys who work in construction companies, and they're much more interesting than these people. There much more fun. That's why The Fall keep going, in a strange way. A lot of people see that.

PATRICK: You've been doing this for almost 30 years. Do you have any plans of stopping, or are you just going keep going indefinitely with The Fall?

MARK: Well, for now I am. I mean, the main thing was to get America done and to get started on the next LP, and I'm pretty much there. So, with this new group, they've got their projects, but I think I can work with them for a good bit. What's good about them is, you can say to these L.A. guys, "Can", you know the old German group, and they say "Yeah, we like that." They've got a very open mind about things. Like a lot of British groups, they want to be a certain thing. Some of them want to be U2, some of them want to be the fucking Smiths. But these ones seem to be quite open. You can put ideas to them and they'll say, "well, we've never thought of that but we'll try it."

PATRICK: You were in 24-Hour Party People, is that correct?

PATRICK: Are you going to see you on the screen in the future?

MARK: I don't know. I'm not a big fan of it. I watch TV and films, but it's not for me, really. I'd like to make a film, but doesn't everybody? I think it's more important to keep Hollywood actors out of music groups. (Laughter)

PATRICK: Well, those are all of my questions, Mark. Thanks for taking the time to answer them for me.