BrooklynVegan Mike last spoke with Dan Boeckner a little less than a year ago. If you don't remember the now-legendary 'G Love cheese incident', I highly recommend you start with that interview before continuing. BrooklynVegan Mike, Dan Boeckner, and Alexei Perry all live in Montreal, and that's where they met up again before a recent Handsome Furs show... 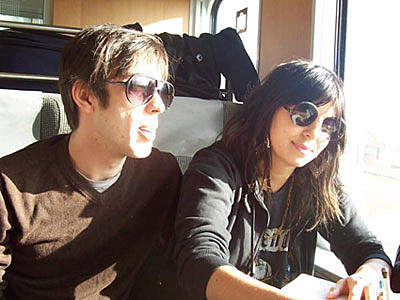 It must be nice to walk to the venue

Alexei: We didn't get to do it this time. We just came in from Toronto.

Dan: We had our wedding reception right here.

So tonight you will be sleeping in your own bed?

Alexei: It will be the first time since we got married, yeah.

Congratulations. It all went well?

Alexei: It was about three weeks ago.

Are you surprised by the amount of fascination people have with your relationship?

Alexei: I think being in a duo people are just fascinated with our relationship in general.

Dan: I think also there are so many bands, a lot of times in music journalism they need an angle. It helps. It must get tiring interviewing these bands. You read so many interviews that are exactly the same. "What are you doing?" "We're working on a new record. We're excited to go on tour. We're working on our sophomore record. It's waaaay different than the last one." [laughs]. It doesn't bother me so much because I understand why people want to write about it.

I wanted to talk about the "Dumb Animals" video. I think it captures the song and the album perfectly.

Alexei: Me too. That was one of our best friends who made it. It was all his idea. I think he did a beautiful job.

Dan: Our friend Panos. He's the son of George Pan Cosmatos, who just passed away recently. He was the director of Rambo and Leviathan and Tombstone. Panos and I lived together for a really long time in Victoria when I was in Atlas Strategic and we really wanted to make a movie together. Like a low budget exploitation movie about a murderous cult of hippies. So he said “how about we make a video where you get killed at the end?

You guys have shot another video for "Cannot Get Started?"

Alexei: There is a fan made video that is obviously not ours. Matt Moroz [the director] had it on his myspace but he had to take it down to re-edit it.

Dan: Matt did the video for "I'll Believe in Anything" and "Shine A Light". We found this fucked up Uzbeki restaurant in Montreal and we took him location scouting and told him the idea were we're playing to a bunch of disinterested people. And some dogs. The original idea was we were going to play here for 400 dogs but it was too expensive.

Alexei: It ended up working out in a beautiful way because there is an entire storyline that Matt developed. It should be out soon.
People assume poetry and lyricism are the same but they are uniquely different. Have you found trouble making the transfer?

Alexei: It's a wildly different beast and I don't find it easy at all. It's been a really nice challenge because most of what I write is meant to be read. It's been fun writing for a band but it's also been hard, to let go of the possessiveness of what you do, chop up things to make it work for the song. It's been a challenge but a good one.

One of the more commented on pieces we did was last years interview with you at Osheaga.

Dante Decaro pops his head and says hello to everyone.

The more things change....[laughs]. Was there any fallout from the fight?

Dan: I read that article after it came out. I try not to read press on the internet but getting drunk and getting in a fight with G. Love, I wanted to see how it came out in print. And then I read the comments field. There were some comments that were so completely disheartening. I forgot exactly how it went but it was to the effect of "THAT guy is a total drunken, alcoholic, poser, wanna be rockstar." I actually want to meet that person. I don't know what I did to him. I think most people that read Brooklyn Vegan know that G. Love isn't part of their demographic, whether you like him or not. You know, people drink liquor and do regrettable things.
I have a really low tolerance...after playing music four or five years professionally and slaving away with post-hardcore bands on the west coast and making zero money, you know? I have a really low tolerance for people coming to things like festivals where the things are really fast and all of the bands have to cooperate with each other to make things enjoyable and to make it enjoyable for the audience who paid to come to the show.

You guys had sound problems

Alexei: Their whole slot got cut back by a lot of time.

Dan: We had some sound problems and the festival could have pushed things back but cutting five minutes from everyone's set but people weren't interested in getting five minutes cut from their set. I thought it merited a cheese throwing, in my mindset. I felt bad about it later. This guy hasn't had a song on the radio in years and that's his milieu. He's not an underground musician. He's not playing for the college audiences, he is playing for people who have graduated college and were in college when he was big.

I read the comments and there were a couple of questions I wanted to ask. One was did Heath Ledger break up the fight?

Dan: Yeah. That is true

That is so completely random.

Alexei. Yeah. He was there with his kids.

Have you seen him dressed as The Joker? They stole the look from Ichi The Killer, where his mouth is ripped into a smile.

And the last question about the incident is I caught you maybe ten minutes after the fight occurred and someone wrote in the comments that you were high on mushrooms.

Dan: That is not true. Me and Alexei did acid recently in Iceland at Dimmu Borgir, a natural lava field with these giant two story statues. It was a molten lake of lava that emptied out into the ocean that left.

Alexei: And we did a fake human sacrifice. So basically, if we were on anything, you would have known. [laughs]

Dan: That's the internet, though. I've never aspired to do anything with any band, especially Wolf Parade. It was an accident.

Dan: Yeah. This has a few more factors to it that make sense to me. Obviously, Wolf Parade already exists and I'm not naïve that that put us on the radar. And I am contractually obligated to put out a record on a label with really good distribution. That is in my Wolf Parade contract.
But back to the subject of the comments, I try not to read that shit because people get big balls on the internet. I'll never meet them and I'll never see them.

Alexei: I always go back to one written about me in Pitchfork about a poem that was my published by my teacher when I was 13 in Chicken Soup for the Teenage Soul. I was like, really? That's what you choose to say about my writing? It's not hard enough to be Dan Boeckner's girlfriend.

I wanted to ask you about that. In many of the pieces I've read about the band, though it's never directly stated, it suggests that this band is all Dan's and you are just going along for the ride.

Alexei: Fuck yeah. It's painful. You want to pretend that things that people say don't matter, but it hurts. It makes me feel weird and strange. I put my heart into this.

Dan: The only thing Alexei and I don't work on equally and together in this band is the guitar. The vocal melodies and the beats and the sounds, we work on those together at home. We wanted to make something that we would want to listen to at home. But, of course, you never do because it's your voice and it would be embarassing and vain. But that was the genesis.

There is a line in "Dumb Animals," where you mention garbage floating in the sky. It always reminds me of American Beauty. I was curious if you think there is any connection between existential angst and waste.

Dan: I was working on those lyrics before we formed. We [Wolf Parade] stopped the van at a rest stop in South Dakota. It was the first time I slept in a really long time. This big truck came by and woke me up. I went walking in the parking lot. You can see from horizon to horizon. There must have been a thermal updraft of something because there were three or four garbage bags hanging in the air. Not even moving. So I called Alexei on a payphone and we were talking about it, and I wrote it down.
It seemed to sum up where I grew up. There is a lot of people of who live around the Trans-Canada highway. The town exists to facilitate people stopping there on their way to somewhere else. If you travel around America, it's way more prevalent then it is here. This is a really ugly industrial part of Canada, but it's in the middle of the forest so it seems way more fucking creepy. A little scrappy outpost of humanity. And this garbage reminded me of people I knew who never left there, just hanging around there and going to the fucking Taco Bell. No matter how “smart” you are, it does something to you.

I joke with my friends that you guys are the indie-rock Wu-Tang Clan. You released a well received debut album, you all go off an do your own thing, and when you guys get back you are your own supergroup

Starting at "Apologies to the Queen Mary," if you count all of the albums and EP's, I believe there are 6-7 releases in under two years. Are you at all concerned about the creative well drying up temporarily?

Dan: Yeah. I was worried about that before recording the last record. We had a bunch of songs that we were touring. I have a couple of those songs on tape and that is the only copies that exist because we decided to we already toured them and decided not to record them. We went into the studio and recorded a bunch of new stuff. I was really worried we were going to hit gridlock. But we didn't, and I am really happy with it. It's about a week and a half away from being complete.

Handsome Furs are on tour. They hit Mercury Lounge in NYC on August 7, 2007.