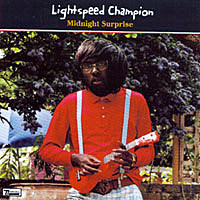 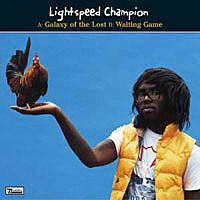 When schizophrenic dance-punk outfit Test Icicles called it a day not long after the release of their debut album, it seemed like a one and done, flash in the pan output attached to the musical trend at the time. Fast forward a year and one of their members, Devonte Hynes, reappears with a new project called Lightspeed Champion, and one of the goofiest videos in recent memory. Musically, it was a complete turnaround from his old band in everything but one element. It was really good.

As it turned out, he had hooked up with the Saddle Creek crew and recorded an album featuring input from Tim Kasher, members of Tilly and the Wall, and Emmy the Great. With three videos already done, the debut album, Falling of the Lavender Bridge, due this month on Domino Records, is one of the most anticipated records in the UK, and will be stateside as well. And it is a Saddle Creek record in every sense of the word; lots of strings with flashes of country, folk, and emotive lyrics. We spoke with Dev about the demise of his old band, the Omaha mystique, and fanatical fans. 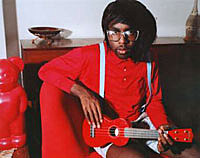 Dev: That's been something on my mind lately. It's really silly. I don't think I'll ever refer to myself as Lightspeed Champion, but if other people do, that would be okay.

I read in a couple of places about how Test Icicles split because, quite frankly, you guys didn't like the music which, if true, is fascinating to me. Mainly because if three friends still like each other but don't like the music, they would change the music, not the group..

It's semi true. It was taken out of context somewhat. We had just grown up. We wrote those songs when we were seventeen. Three years is a long time when you are that age. You get in and out of things. During that time, a bunch of us had the attitude of "Hey, let's form a band, play a show, and break up." We did that for a year. Test Icicles was a band that just stuck together but it got out of hand really fast. 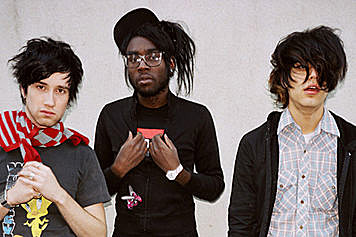 I told a couple friends I was going to be interviewing you, and when Test Icicles came up they wondered why, if you were friends, you didn't stay together for at least another six months, take the money, etc.

No one understands it in England. People still ask me "what's the real reason?" It's really hard for people to get. Me and Rory still talk all the time. I'm going to see him play tonight, as a matter of fact. He taught himself how to play drums.

Drums seem easy to learn on the surface, but once you have to factor in your feet and getting your whole body working together, it can become complicated.

Right. I've been getting in these really surreal moments at shows. It happened last night where I'm singing and I'm realizing that I am making noises with my mouth [laughs].. Like, I am thinking about singing while I am singing and it takes me out of myself.

Last question about Test Icicles: Any thoughts or reflections about going through the UK hype machine?

That was weird. When it started, it freaked us out. The bands that we liked, even the big bands, were able to put out an album or two before they got their exposure. We were just kind of thrown out there. And I'm not saying this to sound egotistical, but we could have been bigger but we kept sabotaging it.

For our second video, I came up with the idea that was supposed to tell people where we were coming from. I don't think it came across, though. The video is us playing basketball. Originally, throughout the whole video, we are supposed to keep shooting and missing, one after the other. Then we take the last shot and the ball sails in the air in slow motion. And we miss that shot, too. It was us saying "we're not really trying, and if we were, we still wouldn't succeed." They changed the concept of the video around and we didn't care enough to argue. It was meant to sum up the band. We refused to play it live, even at the final show.

What people misunderstood is that it wasn't a punk, DIY thing, we just didn't think we were good enough to warrant the attention. For the final show, we had to decide on a support act. We were told we could get Ex-Models or Melt Banana. We were like "you can't get them. That would be madness." To get bands like them to open for us would have been totally wrong.

I love mainstream culture, anyone who knows me knows that. Before we got on stage last night, I had the band watch The Real World with me [laughs]. It's been weird because the hype thing is coming back around again, but it's different. Like, I don't think we're good enough to get the attention yet, but I think we will be in the future? Does that make sense? I've been trying to figure it all out, to tell you the truth.

Your last band had this rep about taking the piss out of everything and to switch from that to this is quite a shift. Was it an uphill battle to convince people you were being serious about this new musical direction? I recall the first time I saw/heard the Galaxy of the Lost video. My first reaction was "is he fucking serious?"

Ha ha. A lot of people don't get my jokes sometimes, including me. I don't know. As for the music, I'm very serious about it. I have a lot of songs that are in a lot of genres. A while back, the people at Domino [Records, Test Icicles label] asked me what I had been up to musically. Initially, I was thinking the album was going to be a post-grunge thing. Four or five songs were meant to be more guitar based. Then, the idea came up to see if we can can get a composer for some of these songs. I had been speaking to Mike [Mogis, Saddle Creek producer] for months before we decided to work together. The idea was to get the guitar out of these songs, to see if they could stand on their own. It's kind of crazy. I'm glad I made this album. I probably won't make an album like this again.

Lightspeed Champion - Galaxy of the Lost

So this sound is closer to you, Dev, then any previous musical output?

Lightspeed Champion is, in effect, the songs. Not the genre of music they are performed in.

There is a sort of aura to Omaha and the whole Saddle Creek scene, this small city in the middle of nowhere. You spent a considerable amount of time there. How did it feel for you?

It was weird at how normal it was. There were moments were I became overly aware at where I was. I wasn't star struck in that sense. There were three moments, though, that made me realize that I was there.

The first was when I was traveling with Mike down the road. I turned and read a sign that read "Happy Hollow" (laughs). I was like,"oh shit," and Mike was like "yeah." That was crazy. The second moment was when we were mixing the record. Mixing is pretty much Mike in the room just adjusting the sounds. Tim [Kasher, Cursive and The Good Life] was around and asked if he could sing on a song. So, he's in the booth, and he's singing a part in that way he sings and I was like "oh shit, Tim Kasher's singing on my track." And the third moment was at night. I was taking a walk because I was bored and decided to go to the studio to play X-Box. I was walking to the studio, I could hear some music that sounded like it was a new song coming from a radio. I get closer and I hear it is them just messing around. Tim. Connor, and the whole gang. Watching them play it just struck me how surreal it all was.

Not to sound cliché, but everyone was great. They are are all genuine people. They all went to high school together. They are all just a group of close friends that have had varying levels of success.

The album, from the lyrics to the instrumentation like the slide guitar, suggests a sense of longing.

I broke up with my girlfriend and I was broke. I wasn't sleeping at all at that point. I would be up for two or three days in a row. I didn't want to write those things, but it come out. It's much like being cut off on the road. If you are driving and someone cuts you off and you scream or what have you, it's not being cut off that upset you but whatever is going on in your life that you are angry at.

I wasn't hanging out with anyone. The only close friends I had I was losing touch with. I wasn't planning on writing about that, but listening to the album, it comes across. I feel separate from that record now. Like I listen to it and not realize it is me who recorded it, which is odd for me. In an objective manner, it comes across as a sad record. 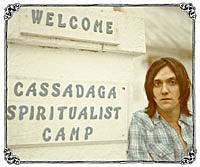 The record sounds like a Saddle Creek album. They have a very fanatical fanbase. Are you prepared for that?

Ha ha. It's funny because we were talking about this the other day. I have a sick sense of humor. I sing people's songs in front of them, which some people take better then others. Some of the Saddle Creek artists, like Tim and Connor, have really committed fans. When I meet these super fans, I take pictures of them and then I'll be hanging out with them and just randomly have them look at the pictures. Outside of a show, I met these five girls who were wearing hoodies that read "Connor is God." The next day I was just walking with Connor talking about something and I calmly said, "take a look at this," and it just got him going. He was "Aww man." Just winding him up [laughs].

Lightspeed Champion is playing some U.S. dates, including the Domino showcase @ SXSW.