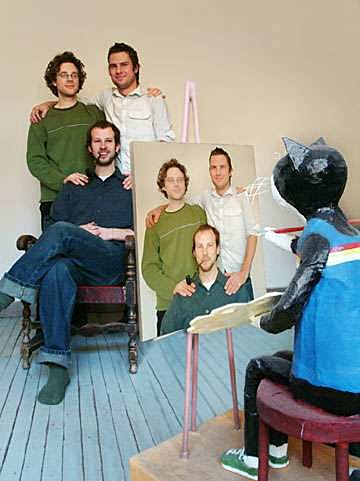 The past few months have seen things move rather quickly for Plants and Animals. Their anticipated debut, Parc Avenue, just dropped, they'll soon be heading out on the road beginning with a stop at SXSW and, when I popped in to meet the guys, they were in the planning/conceptual stages for their first music video. Not bad for a band that has been plugging away on the Montreal scene since 2000. Plants and Animals recently took a quick break from their currently hectic schedule to discuss the discovery of their sound sound, genre labels, and comparisons to Queen(?!).

I guess we'll start with the meeting I kinda barged in on. You guys have come up with a concept and are working on a video?

Woody: We're in the very early stages with not too much experience.

It is one of those fun, almost surreal, milestones that come with being in an increasingly successful band.

Woody: It's new territory. My favorite video growing up was Glass Tiger's Don't Forget Me When I'm Gone, featuring Bryan Adams. If we can live up to that...

Warren: I'm not sure I had a favorite video. It's exciting, it'll be fun. It's more just a question of, like, of getting a feeling of trying to collaborate with somebody else and have the same vision. Ideally, all we want to do is be able to say, "Great idea, go for it." But that's the best possible scenario. 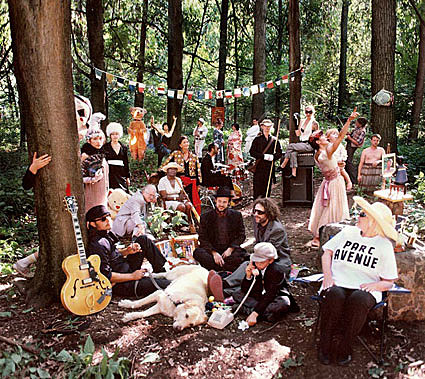 I am struck by the album cover. How did it come about?

Woody: We've had the idea for a long time, for a year, maybe, to have a wacky, freakshow-esque cover with lots of people. We went through incarnations to the point were we almost digressed into doing something with a really good realist/surrealist crazy painter. And then we went back into our original idea. We get a bunch of people, most of them we know, and put them in a crazy environment, dress them up, and have a crazy picnic.

Nicholas: We wanted something with lots of light.

Warren: The first idea was to do a photograph of something crazy, but then we began to doubt whether is was possible so then we found this painter and then we came back to one of the original ideas. It took a lot more work then it would have than in any other situation. The inspiration was the cover of [Bob Dylan's] The Basement Tapes. We didn't want any written overlay on the album cover. The big wink to that album is the t-shirt that Mrs. Henry is wearing.

Woody: We even tried to recruit some neighborhood eccentrics to come up with us to shoot the cover but most said no.

The name of the album and the E.P. suggest nods to both the francophone and anglophone cultures in the city.

Warren: They are both [album and E.P.] nods to the language relationship because it's in our band and it's how we interact.

Nicholas: A famous Quebecois writer, Michel Tremblay, said that if you write about what is happening in your kitchen it might translate to the rest of the world. We're talking about us and who we are and the city that we live in.

Woody: We have picnics with fire-juggling bears all the time. People have to know that.

So the band has been around since 2000, but things have really picked up in the last eighteen months, right? In a broader sense, I mean - outside of the city.

Warren: I think eighteen is too much. Since July. Since we played Iceland.

Woody: Since we toured with Wolf Parade. A big, high exposure tour, for sure, but also the first real tour we did.

I saw you guys for the first time during Wolf Parade's residency at La Sala. I saw you on the last day and I was blown away. You were getting a headliner's reaction.

Warren: That was a great show. The funny thing is we thought the first day of that residency was gonna be the great show. It was on a Friday and a bunch of friends were coming up so we thought we were gonna cut the rug. And it was fun, but the last day, on Monday, was just totally through the roof. You can't logically plan or think about what will be a good show based on day of the week or anything like that. It's really just the people who show up, and the three of four people who subliminally dictate a huge amount of reaction.

Have you guys read The Tipping Point? Malcolm Gladwell writes about that, the idea of connectors and persuaders, certain people in a group that can subtly change the direction of a group of people.

Warren: Totally. I think about that, too, when I'm on stage or in an audience. You could be in a sold-out audience, and in between songs, everyone collectively stands there like this [crosses arms]. And other times, it's completely the other way around. I don't know how it happens, but there must be certain individuals in the crowd that break down that feeling and allow people to relax and do what they want. We need to find those people and bring them on tour with us [laughs].

I wanted to talk about your sound for a bit. In a piece I wrote, I said you guys created "majestic folk rock". Describing music is all about adjectives, and so I'm curious: How you would describe your sound?

Woody: We've never found the right adjectives, I would say, and to even add to that is difficult.

Warren: To go back to that show real quick, how would you define Wolf Parade's sound? Are they indie rock?

Yeah. I think they are regarded as indie rock.

Woody: I read in an interview where someone in the band said that Dan's songs basically sound like Bruce Springsteen if it weren't for Hadji and his synthesizer.

Warren: That's what I was gonna point to.

Woody: So, basically, we're a classic rock band without a synthesizer [laughs].

Warren: We're an indie rock band without a synthesizer because I think if we did [have a synthesizer], we wouldn't be getting a lot of these folk-rock comparisons. We sound more like the past then we do the present.

Doing my research on the band, I kept seeing the term "classic rock" being used and I was curious if that you found that genre, or any other, limiting and wanted to fight its constraints..

Warren: The only thing I want to go against is jam band. It doesn't hold up.

Nicholas:We've been thinking about that. Jam band. It doesn't make any sense. We've played with bands that jam ten times more than us.

Woody: You can see why they do it. We play long songs. It's funny how when you take broad categorizations like that it can have either positive or, more often, negative connotations, so it's nice to just kind of avoid them.

Nicholas: [In a review] we got Queen, which I think is hilarious, because I've never listened to Queen.

When I listen to Parc Avenue, and especially the first track [Bye, Bye, Bye], it reminds me a lot of Todd Rundgren and his production sound, like when the choir comes up. And Meat Loaf, because, like you said, when you reference a genre, you deal with the good or the bad.

Nicholas: Meatloaf and Queen. I love it. [laughs].

Woody: You're not the first, but it's been awhile. Thank you [laughs].

Warren: We don't know how that song came together. It was written on an auto harp. I bought one around Christmas back in Halifax. I was talking with a friend who is touring with Vic Chetnutt and he was telling me how you can hit random notes and you cut put together chords that you would never think of doing if you were writing with a guitar. Maybe the auto harp is the key to the Queen sound or the Meatloaf sound!

Many of the songs have these grand, cataclysmic conclusions. When did the band come to an understanding or realize among each other that "this is our sound?"

Woody: We were halfway done on the record.

Warren: That was the summer where we were like, we had a bunch of stuff and we decided to put it all together. I had bought a 24-track tape machine in Toronto and I pulled it back home. We were free to basically behave like it was a digital machine because we could jump back and forth with no problem. We spent the whole summer in the studio in my place. At the end of "Faerie Dance," after the big kind of epic rock middle part, it goes through a weird morph and the acoustic guitar comes in with the beat. Prior to that, the song ended with us in this shaky period, without the acoustic part, and the song kept getting louder and louder. Coming up with the new ending was kind of a gateway moment for us.

Nicholas: We realized we could do whatever we wanted. Even with no money.

Woody: We had a way out of that trap...you can't end every song with that building 'rah rah rah rah' sound.

Warren: We found our sound around that time and spent the rest of the summer working on that. In that way, we produced the record ourselves. We had an engineer, but when we were working we were pretty in tuned into how we wanted everything to sound. We spent a whole day working on Woody's kick drum, working on making it just sound just right.

Woody: That stuff is really fun to do.

Warren: But sometimes, if you've been doing it all day, and you're hungry and you're sweating, you reach a point... but you keep persevering... and when you get that sound, the sound you want, it all goes away; the bad feelings, the hunger, the stench [laughs].