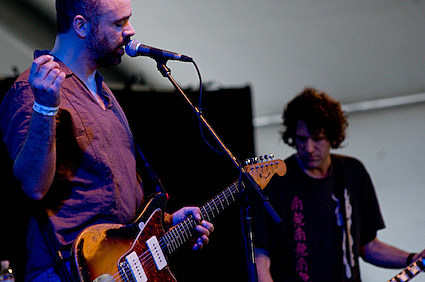 As previously, previously, and previously noted, legendary shoegazers Swervedriver are back. Their recent performance at Coachella was an 'artistic triumph,' according to the LA Times, which makes their upcoming dates (see below) all the more enticing. In the following interview, singer/guitarist Adam Franklin relates his desert island pedals as well as his distaste for the MySpace "shoegaze" category. 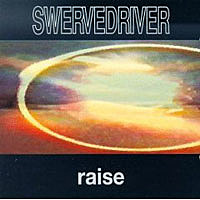 When I listen to Raise, I hear a lot of Dinosaur Jr. worship going on. You guys really work the guitar effects (wah pedals especially) and your vocals are buried. Any accuracy to this perception? And why is your singing so low in the mix?

Adam Franklin: Dinosaur were a big influence around the time of You're Living All Over Me and Bug, for sure. I don't really know why the vocals were so low but I certainly wasn't that confident with the vocals at the time plus it was also perhaps a prevailing stylistic trend at the time.

Did you receive any vocal training between Raise and Mezcal Head? The your voice is mixed much better and it carries a lot of melody as well.

Actually, I did have one singing lesson that may have been around that time. She was an opera singer and she had a picture of her with Pavarotti on her piano and she had at one time given lessons to Johnny Rotten. At the start of the lesson she got me to reach for my lowest and highest notes and then said "right. I guarantee that in an hour you will be singing 2 notes higher and 3 lower - and she was right.

More interview, as well as tour dates, below...

What role did effects play in songwriting? Were any riffs written with a given effect in mind, or were they added as an afterthought?

I think it's true to say that sometimes you find a sound and base a song around that sound but you of course have to find a killer melody to use it with.

For that matter, let's say you're exiled to a desert isle with just your Jazzmaster, your amp and your choice of ONE effect. Which do you choose and why?

Vox Cry Baby wah wah pedal to express my blues at being exiled on a desert island.

Do you consider Swervedriver a shoegaze band? You guys hailed from the same area as many bands from the genre, if I recall, and were on Creation and had a lot of influences different from that of, say, Curve or Slowdive.

No. There are certainly some stylistic similarities with those bands, no denying, and particularly on that first album, with the vocals down in the mix etc as you mentioned before, but really Swervedriver has always been more of a rock band.

Most shoegaze music is often characterized as 'druggy.' Would you say Swervedriver's music qualifies as such? Did drugs play any role in songwriting?

I always say that you probably ought to 'road test' your music to see if it sounds cool on drugs (always better if it does!) and Jimmy was always on 'headphone duty' making sure that the stoners' minds would be blown the requisite amount by some apocalyptic panning.

What do you think of the influx of new, younger bands labeling themselves shoegaze?

To be honest it puts me off if a MySpace band has 'shogaze' listed as its genre but I suppose it's a valid description at this stage. I think there are cool bands from all ends of the spectrum that take elements of said genre, whether it's Lali Puna or Dead Meadow. The band Film School seem to be doing the right kind of thing - taking the influence and leading it somewhere new.

What was your lyrical approach? Many of the tunes seem to be about relationships. Any truth to this, or am I completely off-base?

They possibly are - even some of the songs that sound like they're about driving are about pining for something else, like a new place to live or a new person to hang out with. "She's Beside Herself" and "Out" are undeniably about relationships and "For Seeking Heat" is probably the only song purely about speed on the road.

WhatÕs your favorite song you wrote for Swervedriver, and what is one you have an affinity for that no fan ever gushes over?

"Maelstrom" is a song that I love but no-one else in the band is crazy about ...but that's okay because I guess I can play it with my Bolts of Melody [Franklin's solo album] band! I also like "93 Million Miles From The Sun," which is a re-write of "Harry & Maggie."

Whatever happened to the studio you guys won after the Geffen lawsuit fiasco?

You mean the studio that we built from Geffen advance money? I wish we really had won it! The band Ash nearly bought it, but in the end we closed it down.

What inspired the band's reunion?

The time was simply right.

What are the top 5 records you're listening to right now?