Who has the gnarliest throat? The answer may suprise you... 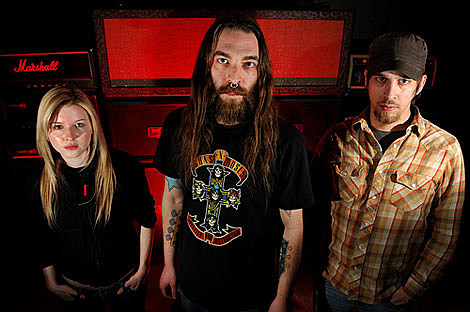 Scion Rock Fest in Atlanta is just a couple days away (Feb 28th) and until the opening tones of Kylesa's guitars, we'll present a series of discussions with some of the key artists taking one of the four stages at the Masquerade. Tuesday we spoke to CT of Rwake, yesterday we spoke with Jacob Bannon of Converge, and on Monday we spoke to Scott Hull of Pig Destroyer and Agoraphobic Nosebleed. Today, we speak with Scott Hull's ANb band mate Kat (pictured above, top left, with long blonde hair).

Turns out the whole "big things, small packages" thing is not just a way for your family to cheat you on birthday gifts. Case and point: Kat from Salome. This pint-sized terror could scare the "grrr" off a tiger with the ferocious voice showcased on two recent releases, Salome's self-titled debut and the coming Agorapocalypse by ANb (due via Relapse on April 14th). A few weeks ago, Salome scared the pants off us at Show No Mercy and as a result, we felt it necessary to confer with said instigator using a few choice interrogatives. Check 'em out below.

How long has Salome been in existence? What were the circumstances behind the formation?

We started playing together in 2006. I met Aaron at a music store and we started talking about music and realized that we liked a lot of the same stuff. We were both interested in doing a doom type project. Rob and Aaron had played together in other bands before Salome, so we started jamming and the fit was really natural.

How did you hook up with James Plotkin for the record?

Khanate is one of my favorite bands, so I got in touch with James Plotkin a few years ago saying how much I appreciated the work he did on their records and his other projects. We've kept in touch, and when Salome was ready to master the full length, he offered to do it for us.

The S/T dropped last year... anything new in the works?

Kat with Salome @ Show No Mercy (more by Justina Villanueva) 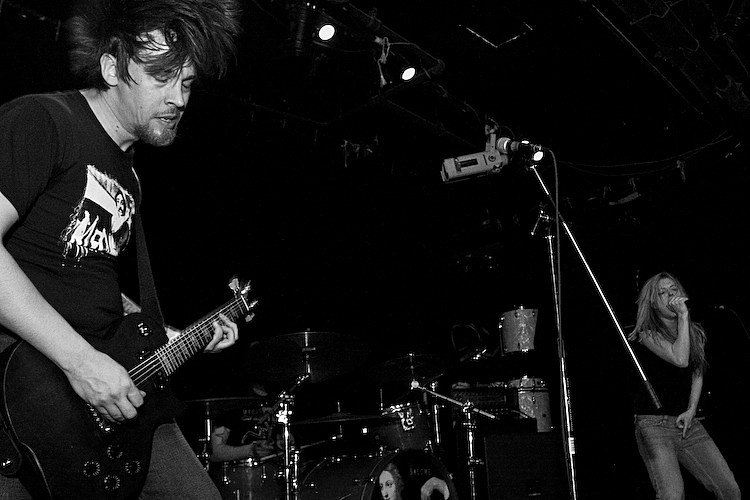 What were the circumstances behind you joining up with ANb?

Scott got a hold of a demo of mine through JR Hayes, who I met when he was still in Hissing Choir. Scott liked my vocals and asked if I'd do guest vocals on "Lost Cause" for Pig Destroyer's Terrifyer. During that session, Scott mentioned doing something with ANb, which I thought would be incredible. It took a few years to culminate, but when he was finally set to record for the split with CROM, Scott had me come in. I was nervous as fuck during the recording, but Scott seemed impressed with the work I did, so things took off after that. I got the invitation to join full time on my birthday. Best birthday present ever.

You are from the NoVa/DC area, an area rich with excellent hardcore and metal... were there any locals that inspired you?

I started singing in metal bands at fifteen, so I've had the opportunity to play with and watch some great bands.
Out of all the bands in the area, Pig Destroyer has been the biggest inspiration. When they came out with Prowler in the Yard, I listened to that album almost everyday. I love everything about that release. JR has been one of my biggest influences vocally and lyrically.

Kat with Salome @ Show No Mercy (more by Justina Villanueva) 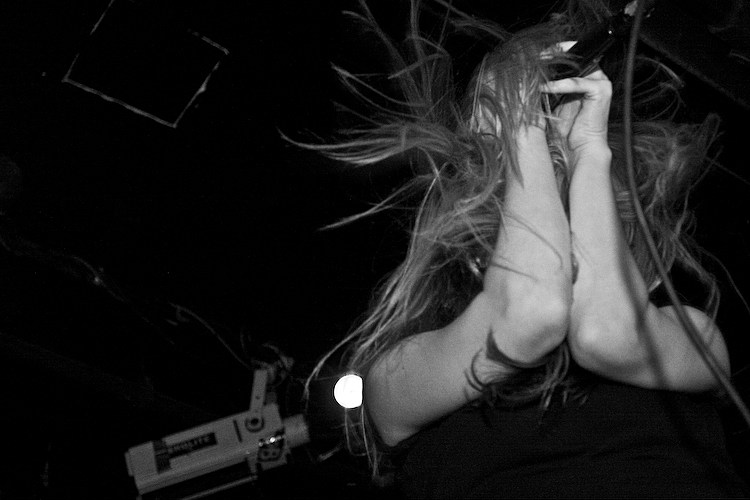 I'm really excited to see Mastodon, Neurosis, and Harvey Milk. There are so many amazing bands on the roster I'm looking forward to it all.

Thanks to Kat, Aaron, and Betsey. Tune in tommorow for my final interview of the week.... Steve Brooks of Torche!

Find all the other interviews HERE.