And it really kind of depends on the forthrightness in which I feel like giving a literal kind of account of everything. 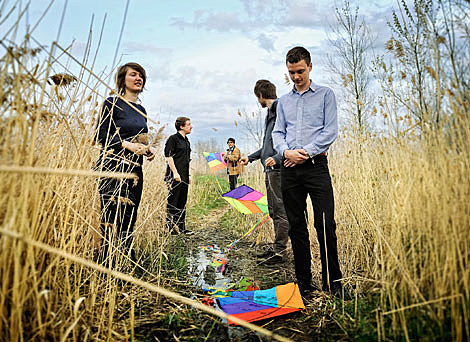 When the Unicorns disbanded in 2004, Nicholas Thorburn, aka Nick Diamonds, came out of the gate rather quickly with Islands and has remained ubiquitous with multiple projects including Reefer and Human Highway. Alden Penner seemed to fade in the shadows, popping up here and there with low-key projects. In May, though, he returned in a big way with Brendan Reed and a clandestine crew of artists and musicians with Clues. Their self-titled album, released in May on Constellation, is an extension of the Unicorns but heavier with more defined arrangements. Two songs (and one demo) from that disc are posted above.

The group is currently on their first extended tour. Included in that is Clues' first NYC show (after a having to cancel an election night show in the fall). The gig takes place at Santos Party House on Wednesday, June 17th, with Drink Up Buttercup and Bridges & Powerlines opening. Tickets are still on sale.

We spoke with Alden about the new album. Well, we tried to. It was obvious that he doesn't feel comfortable talking about his music directly. He chooses his words carefully while at the same time dismissing them the moment they leave his lips. With that said, the interview was a lot of fun and one of the most entertaining I had ever done.

I read that the genesis of Clues began in 2004 when both you and Brendan [Reed] recorded a seven-inch together. What were the steps after that?

Alden: We had this 7-inch, and did a bunch of touring here and there. The two of us, along with his sister. In the following year, I did a bunch of things like soundtrack music [The Hamster Cage]. There were a lot of things that happened in our lives that weren't distinctly related to the band. In that frame of time, I think there wasn't even a name for the band until 2007 so these rudimentary steps went into who knows what purpose. Those years were spent just doing stuff. I think we started talking about albums and his website, Villa Villa Nova that Brendan sort of started, which is sort of hatched within the dilemma of how to make music accessible without feeling like you're exposed in some artificial way. I think that is another way of having the band encompass all these other bands as well. Clues ambition is to be the most ferocious of all of those bands and absorb all of it. It's not so clear how that's gonna happen. In 2007, that is what we were talking about, how to be all bands and how to have all previous bands be our band and be this mega-band sort of thing. Dreams like that take some time to develop. We'd recorded a bunch of things with the intention of putting it in album form but I think because it wasn't formed externally and more of a back-and-forth sort of thing. Once we started bringing other people in to come work, it created its more current character. It's more band like than it was before.

So Pop Montreal 2007 was your official debut?

As a band named Clues, yeah.

Was it ever in the back of your mind, or Brendan's, that you both have a name value attached to whatever your next musical project was going to be? More broadly, what are your opinions on hype...knowing of course you're in the middle of an interview?

[laughs] Right. Like a hall of mirrors. With smoke. It's easier to live in a world where one doesn't have to think about that. I could pretend that it doesn't exist, or that I'm not aware of it, and I certainly try most of the time. I find it at once bothersome and also a tool that we can work with. And with any tool, it can become unwieldy and be used for the fun of sin [laughs]. We're at a stage where we're trying to unfold like any other band and do it with a certain amount of exteriority. Making use of those biographical effects an attempts...to make some sort of recognition of the past and to make it known that we've been making music for awhile. 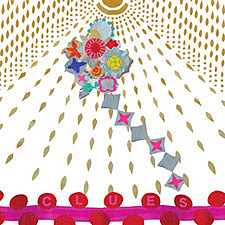 About the album, I was curious how important the tracklisting was. The album has these defined peaks and valleys. How much talk, if at all, was made about where what would go where?

We put the songs in a computer and hit scramble. It was sort of based on the computer's whims.

Really? I find that a little hard to believe

[laughs] Somewhat. It was randomized through the neurons of many different people and obsessed about in some way. Honestly, I don't really have a clear sense.

I'm not trying to suggest it's a concept album or anything.

Okay. The album made sense in sort of movements and sections go up and down and like. And have clusters of activity and a centerpiece to it. We had recorded a bunch of more agitated songs that have more of a peak in energy. And once we finished those we had a collection of these other songs. To sort of place them in the album without seeming it was lopsided somehow necessitated it. The last song is a meditation on what came before.

About the themes on the record, well, let me ask you, how do you feel about people asking questions about your creative process? Does it bug you?

It doesn't in the time between the interviews because I kinda enjoy doing them. Though it doesn't reveal anything about the band, generally. Maybe it does for you. Words can be used to reveal or conceal things. And it really kind of depends on the forthrightness in which I feel like giving a literal kind of account of everything. I don't mind insofar as it may be interesting to someone else and not that interesting to me. It's really not the point to self-analyze or describe as it is to just enjoy the material. In doing these things I'm trying to understand and appreciate this discomfort and go towards it. It's sort of a complicated. The curiosity about it is certainly to address and talk about. But I feel like I'm the least qualified to give insights on it. Perhaps an irresponsible thing on my part.

In some of your other interviews I've noticed people are seemingly trying to tell you what the music is and you just kind of go with it.

I kind of go with it. I've even gone to the point of admitting that we've took this album from Constellation's vaults of mid-90's music and Clues is a total fabrication. A boy band without any of the identity to it. Again, I kind of go with it because I really don't know what it is. It's almost too fresh. It's easier to look back on it in a more distant future. It's sort of hard to isolate the songs as they are now from their historical development through the years. They sort of have these lives and are shared by different people, with the label, and it's been a hugely collaborative thing. It certainly involves a bit of commissioning on the part of Constellation. Almost like a kind of research into where they are, historically. I feel almost in your role, actually, where I investigate what surrounds this energy and how I can actually comment on it.

I do have one question directly related to the lyrics of the album. Two songs incorporate the lyric "who here wants to sleep in the dragon's mouth/who here wants to feel?" and I was interested in why you choose to repeat the line. Did you fit it in because you felt it worked for the song or because--

A lack of material? [laughs]

Well the tone is different in both songs and creates an unique reverse meaning.

I don't know so much in terms of the question but, as you put it, in the tone. That tone of question is often posed to an audience. It's meant to be responded to with cheers but the actual fitting of the words together puts people in an uncomfortable position. They reconsider what their traditional response is supposed to be...and we use up getting nothing, as we've come to experience. I don't know those turrets are necessarily related to one another. I mean they are, in words. But the application in both songs has a distinct role and that speaks to the flexibility of words and the multiple meanings that could be taken from it. In terms of speaking in certain in a tone of voice within that is taking on a role and it's playing like a certain character. Who that character is, I don't know.

The band had no real Web presence leading up this album and it seemed to increase anticipation. Now that the album is out, will there be an effort to change that?

For sure. Things will unfold in time in that regard. The initial absence of that was to give ourselves more room, in a way, to curate that sort of thing. To curate a web presence. I mean, there is a video that's been crafted for the Constellation website. Nothing remains static. It's not the intention to remain plunged in obscurity. Though that can certainly be gratifying at times.