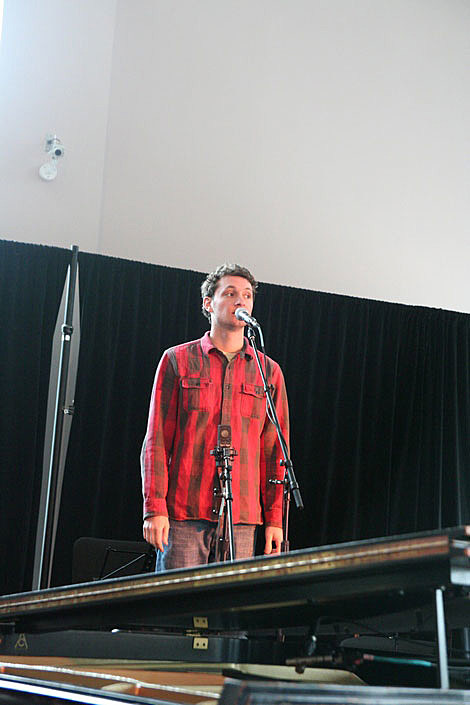 Sam Amidon sung the very first note at the Big Ears Festival in Knoxville on Friday. Overshadowed on the festival's bill by the likes of famed rock bands (The National, Vampire Weekend) and legendary composers (Terry Riley), many of the badge-wearing festival attendees didn't know what to expect when the tall, flannel-wearing Vermont-native's strange voice filled the Knoxville Museum of Art. But they were soon won over.

In retrospect he was perfect for the role. As a musician who has illuminated elements of Americana, past and present, through his re-imaginings of traditional Appalachian songs Amidon has become a vital member of the contemporary folk community. In the spirit of Big Ears, his music relies on collaboration. Along with Thomas Bartlett (also known as Doveman) and composer Nico Muhly he is a member of the 802 tour, whose performances are beautiful syntheses of three varied musical minds. Amidon had three scheduled performances at the festival. I caught up with him backstage at the Bijou Theater.

How did you end up at Big Ears?

Sam: It was through the 802 Tour. We [Nico Muhly, Thomas Bartlett, Nadia Sirota, and I] had done a tour about two summers ago and it was a total blast. So we are always looking to do, not necessarily another tour, but some more shows because we love playing together. While we're all pretty busy, it's usually hard to find a time. But this weekend worked out. Another factor was Bryce [Dessner], someone who we all encounter in different capacities and there are so many people here who we know and play with. For instance, Thomas plays keyboards with The National. There were just so many wonderful musicians so we were totally happy to come play.

And it seems you're featured at the festival with so many performances scattered over the three days. How did that happen?

I don't know! Things just kept popping up here and there, which is fantastic. I have my banjo and guitar so I'm ready to hit the subway. I don't know if they have a subway in Knoxville...

I don't think they do.

Well if they ever build one I'll go play in that too.

Can you describe how the 802 collaboration formulated?

Well, Thomas [Bartlett] probably has a good brain. And so he used his brain to figure out how to combine things. We've all worked together in different combinations before: they've both played with me, I played with Doveman for actually much longer before I was singing my own stuff, Nico and I worked on stuff together, and Thomas and Nico have their own band. And so we have all these little points of connection and it wasn't hard to find a balance. Weaving things together didn't take much time, it just took some thinking.

How did you first meet Thomas and Nico?

Thomas and I have been best friends ever since we were 7 years old. And we've been playing music ever since then. The first time I became aware of Thomas as a musician, I was 5 and at a parent's friends house. And I have this sound memory of those friends playing a cassette tape of Thomas signing "Awimaweh" (The Lion Sleep Tonight) and backing himself on the acoustic guitar at the age of 5. And also doing "La Bamba" while jumping up and down on a couch. My memory is that I was playing with toys on the floor and I remember looking up to the dining table, high above me, and someone is holding a 1987 cassette deck with a weird little voice singing the "Amiwaweh" song and I think "Who's that kid?"

Nico was simultaneously growing up in Vermont, but we didn't know that. We met him when we came to New York. Thomas had worked with him at some point and introduced me. I was star struck because I had already heard his pieces and they were beautiful. And then we just became friends. He took me to Iceland [the location of their record label, Bedroom Community] and it went from there.

I know your label is located in Iceland and on your albums the orchestra is entirely made up of Icelandic musicians. What's it like working over there?

The feeling over there is incredibly clear. They don't always close their doors because they have geothermal heating. So inside and outside aren't too different. The people are very open and kind. Valegir [Sigurðsson] has put all his passion into building this beautiful space there and also his ability as a producer to create a similar space in sound makes it great. It's like you're on the moon. It's volcanoes, little streams, hot baths. It's either always light or always dark. It's a good place to go and make an album.

How did you decide to make reworking old folks songs your main project?

It's interesting because I had never really sung alone. Well, I sung alone before my voice dropped. But afterward it was never really a thing I thought about. I was mainly a fiddle player. And so when I came to New York to see bands I had heard about when I was in high school - mostly experimental and indie rock groups - I thought I would probably be doing that on the violin because that's what I knew how to play. I played in Stars like Fleas and Ioved the New York improv scene. But then I started learning to play the guitar. And just as a way of learning, I played folk songs. I started writing guitar riffs and singing the folk songs over them. And I've been stuck ever since. It's hasn't really gone past there yet.

Do you plan on writing original songs?

What will we hear on this new album [I See the Sign] that wasn't on your previous ones?

The main component that is different is that I brought on Shahzad Ismaily, a spindly spider-like multi-instrumentalist who plays literally ever sound you could possibly imagine. He came with me initially and we put down all the basic tracks together. While I did my part, Shahzad played all the instruments that lay the foundation for the orchestration. Then Nico came and took his thing to the next level. So we had these bodies of sound - Valegir and I - and we spent some time carving those out and seeing what was in there. From my perspective, that tension is what was most exciting. Also, Beth Orton came and sang on four songs. It's the first time I've had a different voice on an album. Having her voice, with so much feeling, was amazing.

We've been sort of talking about this through this interview - but just how important is collaboration for your project?

The thing about collaboration is that it's not a philosophical concept. It's just that we're friends and want to make music together. Your brain works in certain ways and not in others. I don't think in certain ways and they do. So it's exciting to see what happens. You find people who can do what you could never imagine before and then you see what you can try to give to them in return.

The finale of our Big Ears coverage is coming soon. In the meantime, here is DAY ONE and DAY TWO.

Sam headed to Europe to play some shows after Big Ears in Knoxville. He'll be back to celebrate the release of his record on April 10th at 92YTribeca in NYC. Naturally Thomas Bartlett is also on the bill. All dates below...