The recently reunited Lifetime played Bowery Ballroom in NYC two nights in row at the beginning of July (the 8th & 9th, 2006). Unfortunately for me, I was out of town. Lily Olive was there though, and not only did she see one of the shows (7/9), she sat down with four members of the band (@ Bowery Ballroom) and asked them some questions. Below is the transcript of her chat with Lifetime's Ari Katz (vocals), Dan Yemin (guitar), Pete Martin (guitar), and Scott Golley (drums). 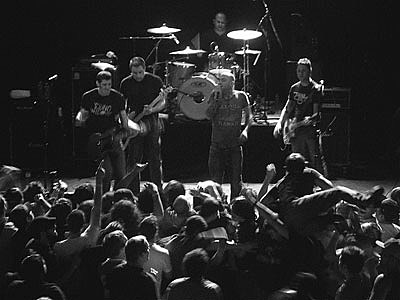 Lily BrooklynVegan: First off, welcome back. You have made many people extremely happy by reuniting. What prompted the official reunion last November after such a lengthy hiatus of almost 9, 10 years of being away? I know you were scheduled to play Hellfest.

Ari: Yeah, that’s what got it together.

Lily BrooklynVegan: Did they just approach you about playing Hellfest?

Pete: Yeah, they offered us like, I mean, three years in a row, like “do you guys wanna play?” They offered us a bunch of money, we were like nah, nah, nah. Then finally..

Ari: We couldn’t turn it down. But that got it all back together again, then, you know, once we actually started practicing again we all knew instantly we should definitely do this. It was so much fun. We have Hellfest to thank, so thank you Hellfest.

Pete: But we ended up donating half to charity.

Scott: I gave a large amount to the Greyhound rescue, saved some puppies from being shot.

Lily BrooklynVegan: Nice. You got back together and saved some dogs.

Lily BrooklynVegan: What were the main reasons you disbanded in ’97?

Pete: It was all my fault, I’d had enough. The reasons in my head at that time of why I did it seemed to make perfect sense, but now I can’t imagine, like, you know I couldn’t of put up with it a bit more. But at that point in time we had been touring for three years, not really making any money, we were trying to make a living, and it was way different being a band back then. We were like dirt poor in a van.

Lily BrooklynVegan: You got burnt out.

Scott: Then the wheels kinda feel off the whole thing.

Ari: Yeah, it just started to fall apart a little bit. You know, like forgetting why you were doing it.

Lily BrooklynVegan: I know some of you had other projects going on during the hiatus (Kid Dynamite, Paint It Black, Zero Zero), ect. Is Zero Zero still around?

Ari: No, Dave Palaitis put it out on his label, Runrock.

Lily BrooklynVegan: So what was it like to perform at SXSW this year?

Ari: It was just a fun time to go there and play a low stress show and just have fun and hang out.

Lily BrooklynVegan: I hear My Chemical Romance was a secret headliner.

Ari: In the beginning it was secret, then everyone knew.

Scott: They were real nice guys.

Lily BrooklynVegan: What about the Court Tavern show vs. Bamboozle?

Ari: Yeah, I was stressed at the Court Tavern show for some reason. I totally got there, and it was weird, felt very strange to me. But Bamboozle was like being in school play or something. The stage was so huge, the people were so far away, it’s like you just go up there and get in your own world.

Pete: We’ve never done anything like that before, nothing that big. There were 30,000 people there.

Ari: It seemed like a lot of people involved, it felt really nice, it was really, really fun.

Dan: I think there were 15,000 people watching us and 15,000 people were in line at the porta-john. It was totally like that…I’m a collector of experiences and it was a fucking experience! I think the coolest thing was having the contract, playing in a place that we kinda grew up in to 150 people with sweat coming off the ceiling, which is an inch above my head…

Scott: He jumped and he got stuck in the ceiling

Dan: Yeah I got my head stuck in the ceiling, and then the next day playing on the battleship….haha

Pete: It was like playing on the deck of The Love Boat

Lily BrooklynVegan: Haha, ummm yeah guys….So you have a new album coming out next year on DecayDance/Fueled By Ramen, Pete from Fall Out Boy’s label. I hear rumor’s it’s coming out around Fall…

Ari: We’re recording it in the fall, it will come out in the spring. Spring’s a good time, you know, the birds, the flowers, the records..we’re not an autumn kinda band, we’re a spring kinda band.

Lily BrooklynVegan: So it’s coming out next year?

Lily BrooklynVegan: I know that everyone’s kinda wondering why not Jade Tree and what were the factors involved?

Ari: We worked with them for a long time and you know, we were getting back together and we were real excited about being on something new that didn’t really have much of a long history, just everything new, new people and everything..

Pete: Who were all very very very excited to be working with us

Lily BrooklynVegan: Did you know Pete?

Ari: No, but we’re friends with a lawyer who’s his lawyer, and it happened so fast, that was it, it was really quick.

Lily BrooklynVegan: So there wasn’t even any talk with any other labels?

Ari: Out of the people that would and could do it, nobody else was tripping about it….He was like “I don’t care if you play 5 shows, 50 shows or 500 shows to support it, I just want to do it.”

Pete: It was whatever we wanted

Scott: As far as how different our lives are and what we can and cannot do, for someone to be like “I wanna do it, and you can do whatever you guys want” ..

Ari: yeah, you can’t tell a bunch of dudes with kids at home that they’ve got to tour eight months next year..he was like “do whatever the fuck you want, we’ll just pay for it.”

Dan: I met Pete when his old band played with Kid Dynamite at our old place in Baltimore.

Lily BrooklynVegan: Do you have any title ideas for the new album?

Scott: We don’t even have a name for the first new song we’ve been playing out at shows.

Ari: It’s called new one. I have some ideas, but I think we’d rather not know.

Lily BrooklynVegan: What about the two-track single you guys are putting out on Decaydance this Fall, is there a release date?

Dan: We’re recording it in three weeks, after this tour at the end of August…

Ari: Yeah, it’s gonna be on itunes and vinyl.

Lily BrooklynVegan: Have both those songs been completed? I heard you play a new one on Saturday night.

Ari: We have 9 that have been going around and 5 or 6 that we play every week.

Lily BrooklynVegan: So the writing process is going well?

Scott: It’s gonna be much better now that Pete just moved back from California

Lily BrooklynVegan: How do you bring your ideas together and is there a set method or does everyone contribute?

Dan: To see things that you’ve come up with change in the hands of your friends, to get transformed into something better than you’ve heard in your head is really exciting.

Pete: Being in other bands and then coming back to this….this is the best creative process band I’ve ever been a part of, every other band there was one person leading and everyone else kinda following and it’s lame.

Dan: Every artist is a control freak, but letting go turns out to be way less stressful.

Lily BrooklynVegan: Any upcoming full tours in the works?

Lily BrooklynVegan: Ok, do you have any consecutive weekends lined up?

Ari: No, we shouldn’t even be doing this, we have a lot of work to do at home.

Dan: My new favorite is not entirely vegan, but it’s a new Thai place on 1st called “Pukk,” fucking rules, all vegetarian and a couple things have egg in them, but you can ask them to take the egg out. I like Atlas Café for dessert..

Lily BrooklynVegan: How about Red Bamboo?

Dan: Yeah! In my other band, every time we come see NY the show gets scheduled around a visit to Red Bamboo. That place rules.

Lily BrooklynVegan: What is it like to hear so many bands obviously influenced by your sound?

Scott: I’ve never actually heard a band that said they were influenced by us sound remotely like us..

Ari: People say they were, and that’s amazingly flattering. If it wasn’t for a lot of those bands we probably wouldn’t be doing it today.

Lily BrooklynVegan: What are your thoughts on the current state of the music industry?

Ari: It’s always been a really confusing thing for me being in a band and trying to create something from the heart and then having to have to go to a business model to make it available is really strange to deal with and to me I guess I can separate the two but I have to walk away when people are talking too much about the industry and focus on other things to keep myself from going crazy. But the things that are crazy in the industry now are everything’s bigger with higher stakes and more money, but it’s still the same feeling…you still feel like you have to balance to make something quality and make it also that people will want to get behind it.

Dan: I think art and commerce have always been uneasy bedfellows, totally weird and uncomfortable. It’s a very weird thing to be situated between.

Ari: We love playing music and we love the kids that come.

Lily BrooklynVegan: Do you have future plans/goals for the band?

Ari: Our immediate goal is to make an awesome record and have fun.

Scott: We just want to have fun, make a great record and hopefully people will like it.

Dan: It’s such a privilege to be able to do this again with the same people and not have our eyes too far in the future.

Lily BrooklynVegan: The past two nights shows at the Bowery have been completely insane. People went nuts. Everyone was singing along to every word of every song. At one point I thought the balcony was maybe going to come crashing down from all the jumping and pointing, haha. How have the crowd reactions made you feel?

Pete: I figured since it was NY everyone would just be kinda watching us, but everyone went ape shit.