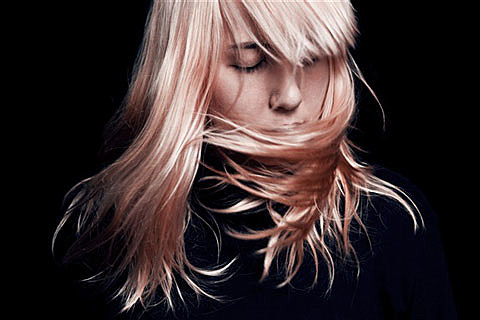 There's already one post today up about Austra's show tonight (7/14) at Pier 54 with tUne-yArDs. To supplement that, here's an unposted interview we did back in the spring with the group's frontwoman Katie Stelmanis, who talks about the transitioning from a solo act to a full-band, the importance of the live show and the process of putting out the group's debut record...

You've been playing as Katie Stelmanis for a while now. What was the idea behind releasing the record under a new name?

Katie Stelmanis: Well, the project throughout the years had become a lot more collaborative. I've been playing with my drummer Maya for over three years, and she had started writing music and doing a lot of programming and producing and it just didn't make sense that it was a solo name anymore. So we decided to go with Austra, which is my middle name, because it kind of carries an ambiguous could-be-a-band-or-solo kind of thing, so we wanted to keep it a little bit in the gray.

How much of the material for the group is new? Because I know you've been playing some of them for a while.

A lot of the songs on the album are really old. Basically, when I put out the record I had four years of material to work with. And I just had to go through it and figure out what I wanted to put on the record. Some of the songs were written in 2007 and just never got released. While they might not be totally consistent with the newer stuff, I wanted a chance to put them out there.

--
Was there anything specifically that inspired the more beat-oriented direction?

We wanted to improve the live show, and I felt like in the past a lot of the music I was making was very cerebral and meant to be enjoyed at home with headphones and it was just really difficult to translate on a live stage, so we made a conscious effort to bring up the drums and the bass in the arrangements so people would feel it in a physical way. Drums and bass are what resonates through your body when you're seeing a show and gets you moving and excited, and we really wanted to tap into that and work with those in the songs.

Did you always know you wanted to have backup singers like in the current set up? How did that come about?

I've known Sari and Romy Lightman for a few years; they have their own band called Tasseomancy, and we played a show together maybe three years ago in Halifax, then they moved to Toronto and we've been friends ever since. I've been using backup singers on and off now for the past two or three years, kind of whenever I can bring them out. The set-up I have now is relatively new: it's maybe a year old or so. They bring a higher level of energy to the show and I think it's important to keep the live show as dynamic and visual as you can.

What was the process for recording the album? Because the single was just you, I believe.

Most of the record was just me in my bedroom, and with this particular album, I actually had recorded it originally almost a year and half ago. We decided that we wanted to have a lot of live instruments--we were recording live drums, live bass and a lot of live guitar---and after that was done we decided that we didn't like the sound. After we got signed with Domino, we had more of a budget to record, and we rearranged everything.

What's it been like working with Domino? Do you find you have more opportunities to put out videos and things?

Yeah, well those videos [for "Beat and the Pulse" and "Lose It"] were still super low budget. But Domino's a really good label, I think because everyone that works there seems to be really committed and hardworking, but they're all people who'd I go out and have a beer with. It's nice to work with people you can connect with on a friend level as well.

What's the story behind the video for "Lose It"? You filmed it in NYC?

Yeah, we filmed in New York right after SXSW. We spent a couple days there, and I guess it was kind of thrown together. We had the treatment from [director] M Blash, and didn't really know what to expect, and while we were filming it we still didn't really understand what was going on. And I guess now I still don't really understand what's going on in the video but I liked the way it turned out and I like that it's so different than the "Beat and the Pulse" video.