Dom with Pulling Teeth at Maryland Deathfest (more by BBG) 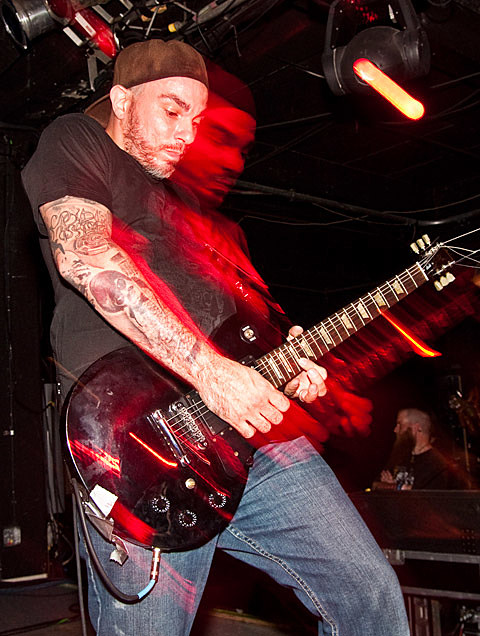 2012 will be the third year that BrooklynVegan will be in attendance at the A389 Anniversary (check out pics from 2010 and 2011), and while the staggering lineup (which now includes Magrudergrind in place of the cancelled Starkweather) will surely mean a day of negative and brutal hardcore, there will also be a bit of sadness mixed in. Pulling Teeth, which contains A389 Records honcho Dom Romeo, will play their final show in their hometown of Baltimore. The band, which formed in 2005, was rooted in the nihilistic hardcore of bands like Left for Dead but experimented with different genres as they grew, eventually releasing last year's Funerary.

As A389 gears up for their annual anniversary show this weekend, and Pulling Teeth play their final practice in preparation for their final goodbye, we cornered Dom to discuss his thoughts on the band, A389 Records, the forthcoming show, and his attempts at a reunion of Bloodlet, Deadguy, or Integrity with the Melnicks. The results of said conversation is below.

FYI, tickets are still available for the A389 Anniversary show at Sonar in Baltimore, MD on January 21st. See you there. 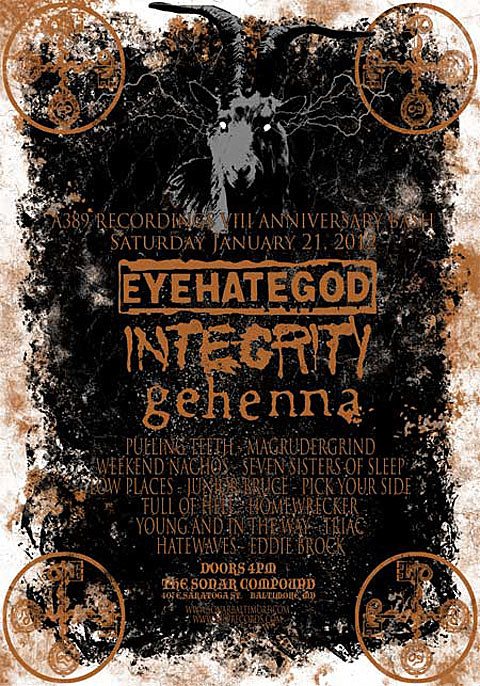 What is prompting the split, and are the band members involved in any projects outside of Pulling Teeth, Hatewaves, etc?

Dom: It's just time to stop. We evaluated our accomplishments as a band and realized there was nothing left that we really wanted
to do. Practices were getting harder to coordinate with everyone's schedule filling up, and it got to the point where doing the band became an obstacle instead of an escape. We decided we should go out on a high note and end it at the A389 Anniversary.

Hatewaves is actually writing an LP called 'The Low Morality'. Filling up an 12"-worth of material is kinda hard since the songs are so short, but when your band is based around all the things that come out of TheXBeast's mouth, there's definitely no shortage of inspiration.

Virgin Witch has been trying to follow up that 7" we did a few years ago, but time was never on our side. Alex C (Skin Like Iron) and I have recently been talking about new recordings, and I have a bunch of stuff written. Hopefully we can record that over the summer and do something cool like a bi-coastal record release weekend before slinking back into the shadows of life.

Alex just joined Integrity and will be playing drums for all their upcoming tour dates. He's also supposed to be playing for Seraphim too, which I hope works out for everyone involved. They're a great band.

Kuhns is in Hatewaves with me, but also plays in a Jawbreaker type band called Invitational. They have a demo and play out here and there. They've been working on new recordings too.

Mitch always has a million projects he's working on simultaneously. Since he left Ruiner I always call his bands Ruiner # (insert number based on order he started the band)....Right now I think he's doing Ruiner #7 and #8...one of them is called Old Lines.

Mike's in school and still participates in the Charm City Art Space and does his labels Firestarter/Toxic Pop. 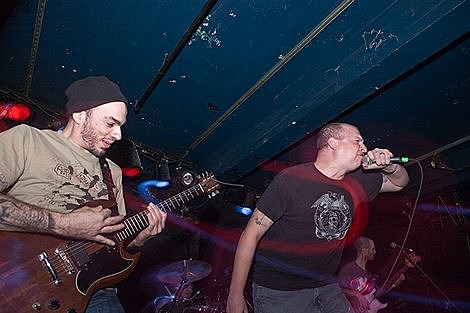 Does the end of Pulling Teeth mean the end of writing music on guitar, somewhat? What is the current status of Slumlords?

Music has been my first love ever since I was old enough to put my mom's records on the turntable. Once I met my wife and then when we had a daughter, I was forced to juggle three things I love and deserve first priority in my life. It's a tough balance, and I just try to take as much of all three as I can get.

I thought about it the other day and realized that I've been playing in bands and making recordings for twenty years now. Nowadays with so many things commanding my time, it's hard to even find time to pick up a guitar anymore which totally sucks. I rarely have time to play or write songs anymore. Between my day job, A389 and trying to spend time with my family it doesn't leave much of a window. But on the bright side, I've been using that same energy to turn ideas into opportunities for the bands on A389. I live vicariously through them while I'm busy cleaning up toys and barf.

As for Slumlords, we played a couple of shows in 2009 and it just wasn't the same vibe. Only fond memory I have of those shows is covering The Scorpions. Perlin and I have since decided to let it die gracefully. We've always talked about doing a fake metal band called 'Night Tigers'. I actually recorded some songs while PT was demoing Funerary, but Jeff never got around to doing the vocals. Regular life has swallowed him whole as well. Hopefully one day. 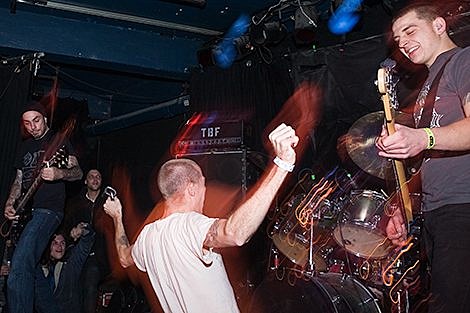 PT was born out of the love for Left for Dead, but one of the strongest things about Pulling Teeth is your willingness to expand your palette to different genres. As a student of hardcore, what excites you as far as other types of music
is concerned?

I like anything that comes across well executed, genuine and sincere. When I'm at home I listen to everything. My ipod is full of stuff and I just leave it on shuffle so it goes from Coltrane to Morbid Angel to Schooly D to Hayden to Integrity....I've never been all about one style of music and have been comfortable around any style/element.

I really liked that towards the end of PT we started incorporating a lot of different influences. I ripped off The Beatles White Album hard on the second half of Funerary.

As you inch closer towards the end of PT, is A389 truly your final show? Are you closing the door to future reunions?

Although things didn't end on a bad note, we're all pretty dead set on hanging it up and moving on. I'd rather focus on the future than on the past. The world needs more Hatewaves.

If you had to choose five Pulling Teeth songs that represent your perspective/direction as a band, what would they be?

Most people enjoyed PT's heavier/standard tracks which is cool but to me the most interesting tracks that were above and beyond everything else would be:

All those songs are a lot of fun if you listen to them with headphones on in the dark. A lot of time was spent crafting layers and layers of sound and creating a mood, whereas most of the PT standards were more straightforward in their delivery.

As far as perspective/direction of the band, you could easily follow PT's evolution by playing these tracks in order: 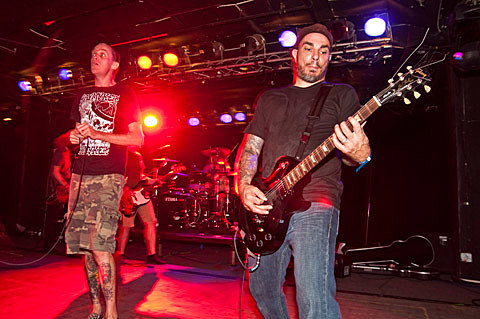 A389 primarily deals in negative hardcore, but you've already released albums by a doom band and most recently a shoegaze band. Do you have an overall vision for A389 that moves outside of what is your primary focus?

I always say good music is good music. If your band is on the level, and we get along then there isn't much more to it than that. I'm not interested in managers, contracts, major label distribution, advertising opportunities etc...A389 is all about letting the music and packaging speak for itself. Doesn't matter if it's punk, hardcore, metal, doom, neofolk, shoegaze...whatever's clever.

You are from Canada and have traveled the world with Pulling Teeth. What about Baltimore, outside of your personal relationships, do you connect to the most?

The thing I love most about living in Baltimore is that it's geographically located near a lot of cool cities and that it's an affordable place to live. Affordable cost of living attracts creative people with great ideas who can pursue these ideas and still manage to pay the bills. On the other hand it also attracts a lot of creeps. It's not the prettiest place in the world, but it's home.

Now that we are a little bit removed from the birth of your first born, looking back has becoming a father changed your worldview? If so, how so?

Once a family of my own entered the picture, I found myself a lot more weary of the company I kept. I realized that asides from liking the same music, I don't have a lot in common with a lot of my peers. Nowadays with free time so scarce, I really enjoy and value my friends and loved ones more than I ever. I co-exist peacefully with everyone else. 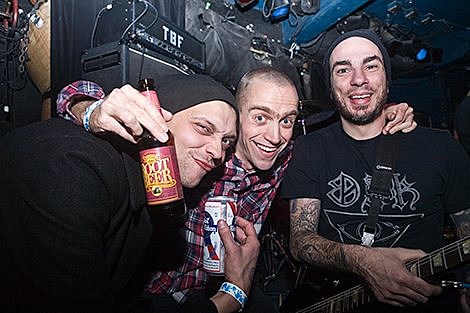 A389 anniversary is definitely a show that many travel to come see. That said, do you care to reveal your hand as to some of your "dream bookings" for the festival in the future?

At the risk of sounding corny, the thing I like best about doing the Anniversary Show is being around all my friends from around the world one night out of the year. I've always intended to do Integrity/Haymaker/Ringworm/Gehenna/Starkweather on the same bill, but each year something gets in the way and the main lineup deviates. Other bands I dream of having are Ned's Atomic Dustbin, Left For Dead, Mayday, Deadguy, an Integrity set with the Melnick brothers playing, and a Bloodlet reunion. I'm comfortable sharing these dreams as I'm pretty sure they'll never come to fruition...but you never know. Someone get Art Legere on the phone!