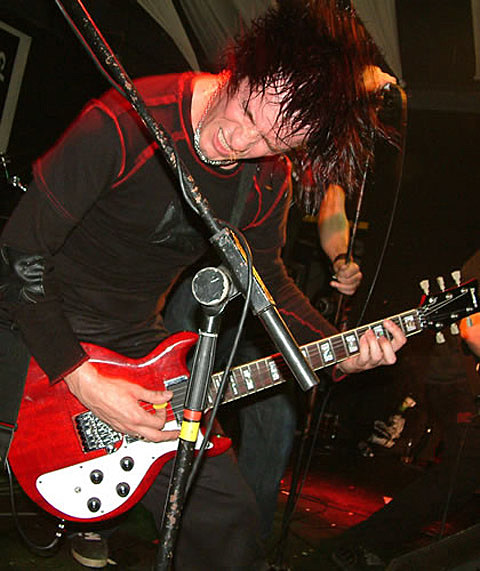 To certain fans of punk, crust, and metal, Gizz Butt may be a familiar face. Gizz Butt recently logged time performing Crass tunes as a member of Steve Ignorant's Last Supper, is the current bassist for UK thrash greats Sabbat, served as guitarist for the live lineup of The Prodigy and is currently one of the driving forces behind the reformation of the English Dogs: Forward Into Battle lineup.

Gizz Butt, who was a member of the band during that classic period, is preparing to hit the road with the English Dogs for a string of US dates that include the upcoming show at Europa on 2/12 (tickets). We cornered guitarist to discuss the upcoming tour, the reunion, Rudimentary Peni, Rachmaninov, Excel and his thoughts on the "other" English Dogs. The results are below.

Gizz with the English Dogs 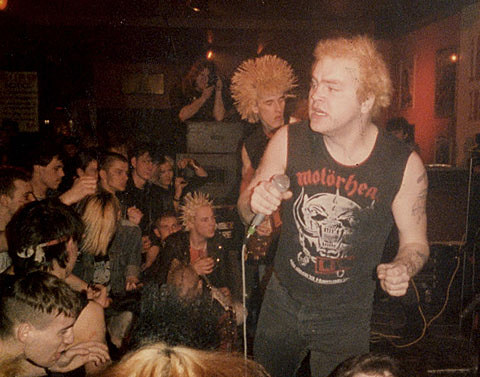 Why reunite the Forward into Battle lineup now?

Gizz Butt: I've actually been trying to do this since 2003 so it's no overnight thing. Facebook made it easier to get in contact with Pinch and Adie and I would keep touching base with those guys, constantly feeling when the time was right. Obviously it needed Pinch's consent, he is the founder member of the English Dogs. It didn't feel right without us doing it together. Pinch and I met up a couple of years ago in England over a curry and some Cobra and Kingfisher beers. On the way to the restaurant I put it to him. At first he was unconvinced but then he reconsidered. You have to imagine that it had taken us 10 years to just get together with him being in The Damned and me being away with Steve Ignorant or Sabbat or The More I See. We played together in Janus Stark in 2000 but we had our differences and went our separate ways so it had taken all that time to just get the proposition on the table. Amazingly he had second thoughts and reconsidered it. First I heard it through some friends on Facebook and then he got in touch. It was helped along by Dan Rozenblum of The Pantheon agency. I was introduced to him by EXODUS and their T.M. Ross Erkers. Dan is a superb agent and I worked with him on THE (CRASS) LAST SUPPER TOUR. All these things helped it along. Without those key elements it wouldn't have happened; Pinch, Dan, Adie and FACEBOOK!!!

Gizz (Left) as a member of Steve Ignorant's Last Supper

There have been a few different versions of the English Dogs lineup, and there are currently two different lineups of the band. What made you want to reform the Forward Into Battle lineup?

The English Dogs have had 4 different vocalists and I've been one of them! There has never been one single member that has been in the line up throughout it's entire history but the closest is Pinch who has played on 10 official releases. I've played on 8. This has given each release a little of it's own identity and as individuals we will naturally feel closer to some more so than others. The entire FORWARD era registers my early collaborations as a player and songwriter with the English dogs and because it was so new , young and creative , it was a truly exciting time. When we toured the USA in 1986 it was without doubt the pinnacle of the English Dogs career. No doubt whatsoever.
5 years ago I got a call and some emails from some of the guys , namely Jon Murray and Wakey . They were asking then about reforming the band and the emails at first were really positive. I still have the mails. Within 3 weeks they had made "their" decision to reform without me and I think Pinch may have expressed that he was busy with The Damned but whatever, they seemed to not be bothered whether he was in or not. Their reason "I was making too many demands" stemmed from me saying in the emails that I wanted to play songs from THE Forward Into Battle ERA. They wanted to boycott this entire era. So that was it . If it was ever gonna happen then it was going to need Pinch and Adie, and Wakey wasn't going to be a part of it . Unfortunately either was Jon, not just because of their attitude but the last I heard Jon's health was hindered by a brain tumour. It's very sad because Jon with Pinch and myself had written the bulk of the metal era together so I feel like we've lost him 3 times!
The "other" line up calling themselves English dogs is basically Wakey and his friends. They have had no right to the name and we weren't best pleased when they announced they had done it. When Dan contacted me about the Forward Into Battle TOUR and this thing started gathering momentum, their reaction was of total protest and utter hatred. You can decide for yourself what you think is right but we've been given this chance, which may never come around again. Don't forget either, we're 45 now so if we don't take this now who's to say we will have the health to do it in the future? We may not even be alive! Let's be realistic! 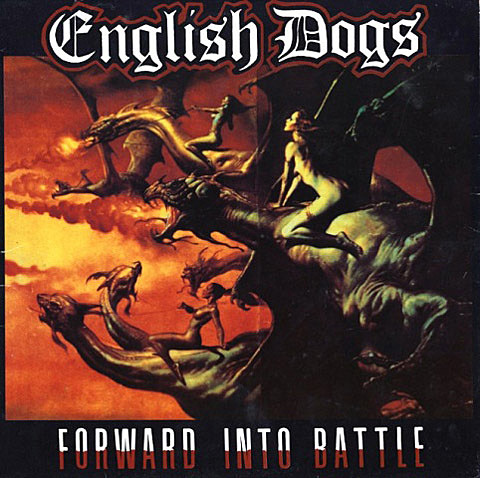 Do you feel that Forward Into Battle is the definitive English Dogs statement, musically speaking?

Not just musically. In Britain at the time there were all these Punk bands either copying Crass but trying to "Out Crass " them and taking it too far or there were the Discharge clones that were getting more grungy and shouty and THEN there were the Punk bands that were morphing into Oi bands who's values were just slightly questionable. We chose to find our own way out of the maze by not writing about the obvious subjects; World War 3 , Meat means murder , kids being united and so on ( I'm not knocking anyone WANTING to sing about that subject matter but if you're just doing it because it's the fashion....). We wrote of survival, the battles of today and yesterday, fear and of the powers that be keeping us in lies and secrecy and robbing us of what little money we had .
Heavy rock and metal influences were of great interest to us because we enjoyed playing more and more challenging things. Back at home our surroundings included fans of metal. Vinyl and VHS tapings of our heroes were our teachers and painstakingly we would trek the towns to check out players that we knew that were capable of this or that. I would rub shoulders with great guitarists and I wanted to be on their level because they were having a good time, expressing themselves.
We wrote FORWARD in a climate of discovery where it was right to step out and look in the mirror to say "I don't belong here, I'm gonna look somewhere else...". It so happened that people in the USA were feeling the same thing. They totally got what we were doing. 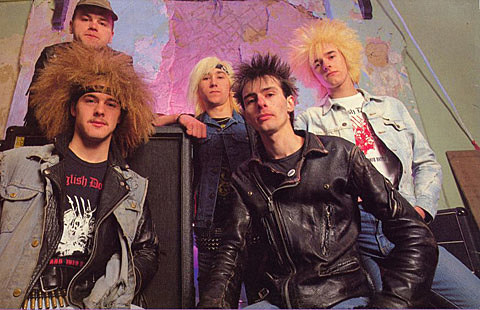 Some of your influences are somewhat well documented, but what are some of the less obvious influences on the ED sound from that era? There seems to be a focus on melodicism on the records amidst the riffing.

There was no single band that we used to steal our ideas from although I can't deny that there's certainly a few Van Halen influenced licks here and there! We all used to like The Ruts, The Damned, Trouble, Iron Maiden, Black Sabbath, UK Subs, Discharge, S.O.D., Hawkwind, Metal Church and lesser known stuff such as Loudness (Especially the Disillusion album). The melody probably stemmed from The Beatles. Particularly the Rubber Soul album and Russian classical music IE Rachmaninov. Personally I was really digging The Bad Brains green tape, everything by Black Flag, Hendrix, Thin Lizzy, Killing Joke, The Buzzcocks, the early Siouxsie and the Banshees and ATV stuff. 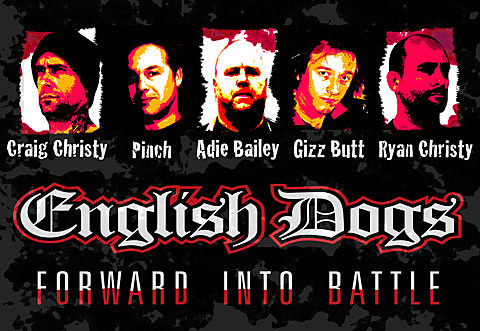 What have practices been like? Has the old chemistry returned and do you feel at ease with the rest of the members of the band?

Practices have been insane because we've had to do it by half of the band rehearsing (The rhythm section) recording the rehearsals and sending the files to the other half who then rehearse along together TO the recordings. It has been surreal but when half of the band live in the USA and the other half in England then we do whatever it takes to make it happen. We'll finally be rehearsing together in San Diego four days before the tour.

Coming up in the early days of crossover/punk, who do you think was a band that you feel didn't get its due?

What, you mean apart from us? I used to really like Rudimentary Peni but they were troubled by ill health and mental problems and so they hardly ever played live. We all really dug the demo tapes by Blind Illusion and personally I used to listen to Excel a lot. Both those bands are fairly unknown in the UK.

What about Forward Into Battle album do you think resonates the most with fans?

The fans wanted what that had to offer at the time. It was really tuned into that era, the great drumming, the gravel rough edged vocal, metallic riff after riff and solos, but the songs were short and catchy. They hadn't reached self-indulgent yet. It definitely resonated. There was enough repetition and hooks for everyone to latch on to it.

Is this relatively short US tour a bit of a "testing the waters" for possible additional touring? Have you ruled any of that out?

It's taken us so long to get to this stage. Let's just see how we get through this first. In my car is a cassette of riffs and songs that were meant for the English Dogs album AFTER Where Legend Began in 1987 when we split up. You never know what could happen but for now let's just see that we have this tour, it's a gift, it may not happen again so come on, let's fuckin' enjoy it! 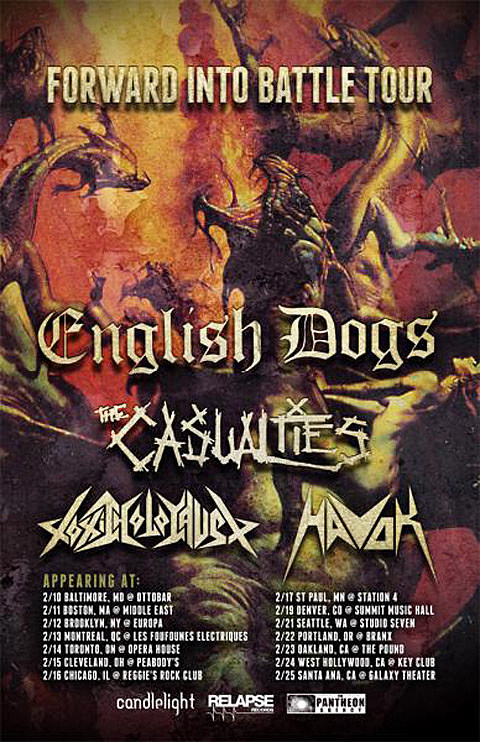