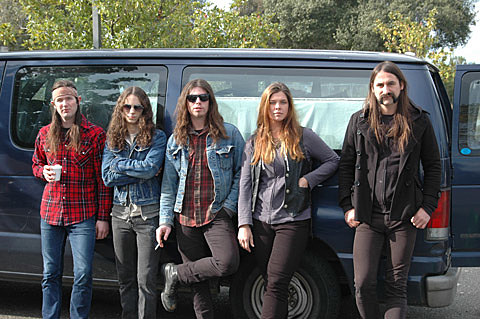 With not only the sound of early NWOBHM, but more importantly some of the fire that propelled those legendary bands, Christian Mistress are preparing to release their follow-up to the well-received Agony & Opium (which was released via 20 Buck Spin in 2010). Possession, due 2/28, is the band's second LP and first due for new home Relapse, and you can stream three songs including the title track which makes its first appearance here. Listen to "Black Gold", "Haunted Hunted", and "Possession" below.

We also sat down with the woman behind the soaring voice of Christian Mistress, Christine Davis, to discuss their new label home and LP, early Scorpions, and their upcoming date with Roadburn. The results, and all song streams, are below.

Your vocals are smoky and muscular, and with a fair amount of vibrato. They remind me of Grace Slick of Jefferson Airplane fame, another female fronted band with an all male cast behind her. A lot of your influences are clear, but how much of an influence is early Jefferson Airplane and possibly late-60s psychedelia on the Christian Mistress sound?

CHRISTINE: 'Smoky and muscular' Just like me! Ha, well I like Grace Slick and would rather be compared to her than say, Geddy Lee but I don't think I have ever listened to Jefferson Airplane much. It is however, such a hard question because I have been listening to so much different music for such a long time as have all the other members of Christian Mistress. But since the topic is 60s psychedelia, I can tell you that I really love some of the 60's 70's psychedelic music such as the Serge Gainsbourg psychedelic recordings, Areski and Bridgette Fontaine, and the 13 Floor Elevators, Shocking Blue would be more of an influence than Jefferson Airplane, . However, that is pretty much the extent of my listening there and I would be very pleased if any of those musical projects were inadvertently influencing me. Most of my influence as a singer comes from punk bands I loved and still love such as the Italian crust punk band Contropotere and of course the obvious - early Iron Maiden. Also, I love the kind of chanting, droning sound that singers like Micheal Gira from the Swans puts to songs. Also, I am influenced by singers that do not hold back and have resigned themselves to fully letting go on stage such as Diamanda Galas.

Looking in the rearview, what are your thoughts on Agony & Opium? What are things you might have changed if hindsight was 20/20?

In my mind Agony & Opium was the perfect first LP for Christian Mistress. We took those six songs and set them to vinyl in a very true and honest representation of what we were as a band at the time. We had absolutely no expectations that anyone would ever hear it or for that matter, like it at all. We had no budget. I think the whole thing cost us 500 dollars to record and we of course, paid for it ourselves. I love everything about it and it will always be that fast, furious classic CM record. We didn't have any clue that we would get to make a second LP. For Christian Mistress, it has always been - No expectations and take things as they come. In that way, we remain fresh, excited, in-tuned to the music and each other. 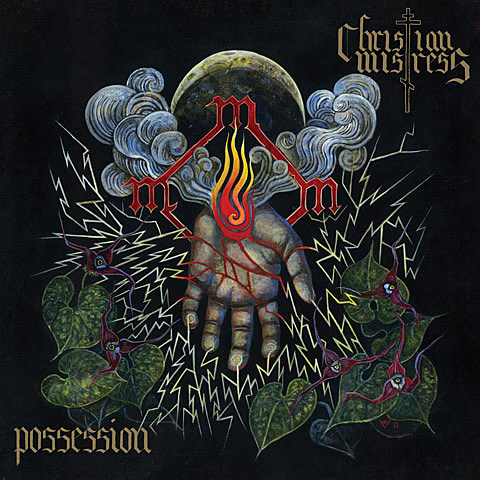 Agony & Opium was well-received upon its release. What were your goals heading into the studio for Possession? How much of the material was existing vs created in the time between the last release and the studio time?

Our goals for Possession were to get a heavy guitar sound and still use analog equipment. We took the same spirit into the studio for Possession as for Agony & Opium, but we had more time and more material for this record so it felt more involved. Most of the material for Possession was completely written four months before we went into the studio. Much of it came directly after Agony & Opium. The song that set the vibe for the record was All Abandon. It was the first song written for it and became our guide to the style for the rest of the record.

You recently signed with Relapse. What prompted the move from 20 Buck Spin?

We were completely happy working with 20 Buck Spin, however, we were ready to release another record faster than they were ready to. Their release schedule was already full and we wanted some kind of recording budget which we did not have for Agony and Opium -we paid 500 dollars for that recording. Anyways, they were willing to give us a budget but not until much later than we had planned. Meanwhile, we had offers from other labels, the most simple, straightforward and to our taste coming from Relapse. It was just a matter of circumstance. Dave from 20 Buck Spin is still our bud and we will forever be grateful for his early involvement in our band. 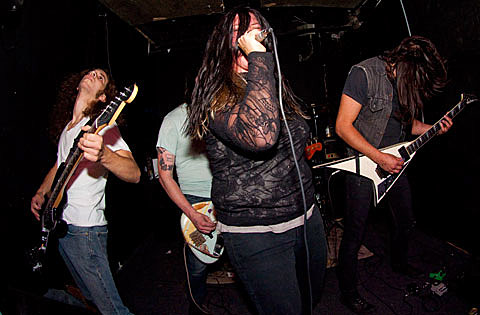 Do you all currently maintain full time jobs and if so what are they? What advice do you have to creative individuals that are juggling a full-time job and a potentially full-time career in art?

Uh well, it is fucking hard. For example, every member except for myself works at the local pizzeria. When we go out of town, it puts a strain on the business. I don't know how they work it out, I guess a lot of people have to cover shifts. I used to work there too and it just got too crazy.

Last year I left town for almost 6 months to work in the mountains in California and everyone in the band was totally understanding but it sucked for them because they had to practice without me for a long time. I was working in a remote back country area of the Sierra Nevadas. I hiked out of my job halfway through to record Possession in Grass Valley, California and then hiked back to the job to finish it directly after finishing recording. I had a total of 10 days off to hike out (2 days each way), drive to the studio, record, and hike back in. So, I would have to say, to balance working and being in a time consuming project such as a band, you have to be willing to sacrifice a normal existence in order to keep a direct line to what is ultimately important to you. For me, as a singer, it is having the incredible opportunity to sing my guts out with Christian Mistress.

Any plans to hit the road in the coming months?

Yes, we are touring for one month in April 2012 across Europe and appearing at Roadburn. We will definitely head out on a US tour in 2012 and can't wait especially to play New York again, our show at the Acheron was so killer.

You guys are confirmed for Roadburn 2012. Who are you most looking forward to seeing?

We are touring Europe before and after Roadburn - before with Hammers of Misfortune and after with Black Breath. If we get to hang around the festival much, I would love to see bands that I don't usually get to see here in the United States, but it is hard for me to pass up the opportunity to see Yob play the Catharsis album because it just never ceases to blow me away.

You have received word through your agent that the world's most perfect Christian Mistress tour is in the works. You will play first on a bill of three. Who are the two bands that will play after you? Why is this tour so perfect for you?

The Scorpions ca. 1972 - Can't get enough of that Lonesome Crow era Scorps and it has been my jam for a long time.

Lucifer's Friend ca. 1972 - I would love more than anything to get to hear "Ride the Sky" live.