I see a lot of concerts, so it's hard to feel bad about missing one of them, but of all the shows I miss this year, the Jens Lekman (with band)/Beirut show at Bowery Ballroom Friday night (July 21, 2006) will probably be the one I regret not seeing the most. Then again, I saw Jens (solo) at Mercury Lounge just two days earler, and I've seen Beirut before, AND I'm sure there will be plenty of opportunities to see both of them again (especially Beirut who lives in NYC). In fact, Jens (who lives in Sweden) is playing NYC one more time (but not with a band) when he finishes the rest of his tour - the tour that took him from NYC (without Beirut) to Boston to play TT the Bear's Saturday night (July 22). That's where Mike (who interviewed Beirut while they were in Boston) caught up with Jens before he took the stage.... 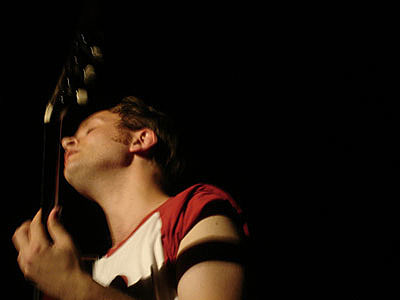 BrooklynVegan Mike: Listening to your songs, I get the impression that most, if not all, of them are 1st person. Do you have a desire to write 3rd person, or completely fictional songs?

BrooklynVegan Mike: Since the songs then deal with people you know or have had experiences with, how has the reaction been from the subjects?

Jens: They have been fine. Some people don't mind, others did. I have told everyone that if anyone was offended or didn't like being the subject of a song to please tell me. I really would like to know.

BrooklynVegan Mike: I am thinking of the girl in "Psycho Girl," does she know?

Jens: Yeah, she knows. That was pretty bad. We don't talk anymore. I would rather not get into it.

BrooklynVegan Mike: My next few questions are about Sweden…..well, let me ask you; does it bother you that you have to answer regional questions?

Jens: I understand people have a fascination with Sweden, but sometimes I get asked really dumb questions. Once, I was being interviewed by a DJ in New Zealand and he asked me, "so, I hear there are a lot blondes in Sweden?" I said yes. Then he asks, "How does that affect your songwriting?" [gives a confused look]

BrooklynVegan Mike: [laughs] how did you answer it?

Jens: I laughed it off. How could I answer that? I am from Sweden and I understand people have preconceived notions about it, which I am fine with. So, to answer your question, no.

BrooklynVegan Mike: Okay. Now are you as big in Sweden as the press makes you to be?

Jens: Yeah, I am popular in Sweden, but to be honest, being popular there is like being popular in Massachusetts. The population of Sweden is about 9 million. One of the great aspects of that is because of the countries size it is easy for artists to make a name for themselves. There really is no difference between a big label and a small label. Within the country, there is nothing a major label can do that a small or indie label can't

BrooklynVegan Mike: From this ignorant American's point of view, Swedish music seems to be comprised of pop, garage rock, or death metal. Obviously, there are other genre's. How come they haven't been able to break out?

Jens: There are other genres of music, and some of it does have an appeal outside of Sweden. In Sweden, I would say there are three dominant genres of music; swing pop, prog-rock, and party rock.

BrooklynVegan Mike: Prog rock, really? I would have never guessed that.

Jens: Have you heard of Dungen?

BrooklynVegan Mike: Yeah. I forgot about them.

Jens: They are pretty big in Sweden. For whatever reason, Swedish prog-rock has a following outside of the country. There are parts of the world, like the United States, that has a strong pocket of prog-rock fans. And party rock works everywhere.

BrooklynVegan Mike: I asked the regional questions because it seems that if something comes out of Sweden that is remotely pop-ish, they cite Abba and talk about Sweden's rich history of pop music, or techno in France or Twee in Scotland.

Jens: Exactly. People in other countries try to lump in these bands into their preconceived notion of what that country is supposed to "sound" like. Like you said with Abba in Sweden, when people think France they think Kraftwerk and Tour De France. The only exception to that is if a sound comes out of that country that is completely counter to that sound. So, with pop music in Sweden, people point to death metal. I think another reason for that is that it helps sell that music abroad.

BrooklynVegan Mike: How did you get all of the samples cleared?

Jens: We try to get as many as possible. We work hard to get as many permission slips from bands as we can. The thing is sometimes even if a band or artist says it is okay for us to use it, the label still steps in. With some labels, you have to buy up to a million at a time. Before I signed with Secretly Canadian, we had a discussion about the samples and we came to an understanding. If I worried about all of the samples, a song like Maple Leaves would have never been recorded.

BrooklynVegan Mike: What if the album gains notoriety and people begin listening for those samples?

Jens: I am all for paying the artist. I take full responsibility for that. I sacrificed myself in terms of samples and what was left out and I regret it. I told myself I would never do that again.

BrooklynVegan Mike: Seeing how you made your name in the states (file-trading, blogs) and the manner you release a lot of your music (12-inches, limited run e.p's), are you ever concerned that your music is more an object of collection over an object of appreciation?

Jens: Not really. I know what you are saying, but I think that is something any band or artist has to deal with. I make the e.p's and stuff on small runs for the fan that wants to hear all of the music I have made. I have a lot of music. I gave Secretly Canadian 200 songs.

BrooklynVegan Mike: Artists such as Jose Gonzalez and El Perro Del Mar have created an awareness in the states. Their initial exposure, at least to me and many people I know, came from their association with you. Do you feel at all like a gateway to expose artists?

Jens: I do, just a little. I am first and foremost a music fan, a music collector. Whatever what kind of name I have been able to establish for myself I would like to try help to get those artists who I think should be heard, like with a Jose Gonzalez or an El Perro Del Mar. I hope in time I can introduce other artists I think should be given a bigger audience.

BrooklynVegan Mike: Now I read that the first people to hear your music were the labels you sent your demos to.

Jens: Only one. Secretly Canadian was the only label I sent my demos to.

BrooklynVegan Mike: Really? That's interesting. Was there any one point when you realized the music you made in your bedroom was being played around the world?

Jens: No, I don't think in terms of moments. Everything has just been kind of moving…[stops and listens to Frida Hyvonen playing]…I love this song. Anyway, I try not to summarize things like that. I can't point to one particular moment and say, "I made it." It's no fun of thinking of life in those terms.