Eric Wood of The Bastard Noise at DBA (more by BBG) 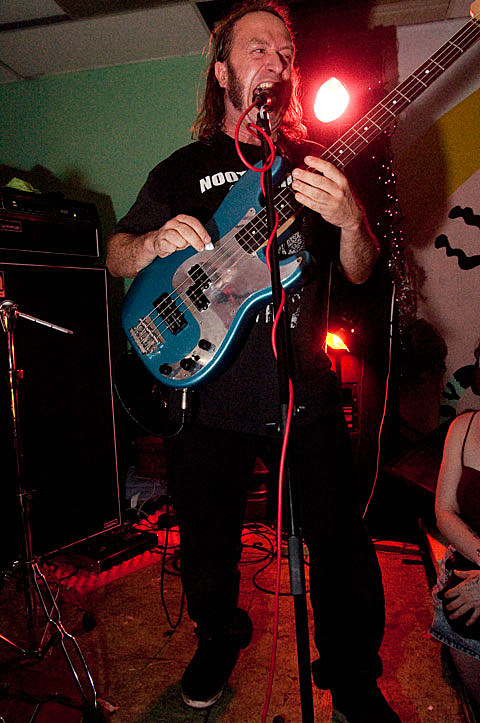 With all of the back and forth recently between Bastard Noise and Akron/Family, regarding the MiTB Skull art being used by Akron/Family on a shirt, it might be easy to forget why it was an issue in the first place; The Bastard Noise is an important and pioneering band. Now currently in a new incarnation with Aimee Artz on vocals/noise, Eric Wood's evolving vision has included elements of hardcore, powerviolence, jazz, noise, and experimentalism, but never at the expense of interesting songwriting.

We sat down with Eric Wood to ask him a few questions about his his response to Akron/Family and the cricism he received, his current projects and the future of the band. The results of our conversation is below. 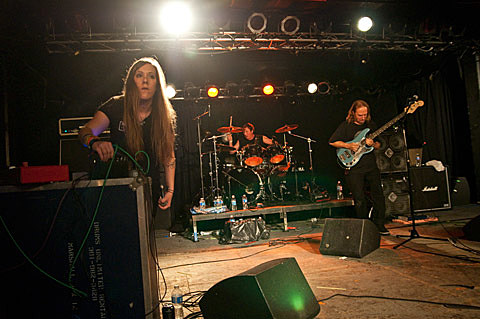 You spent a recent weekend with Richard Hoak behind the kit working on new material for a forthcoming split with Lack of Interest. How does he fit into Bastard Noise with the departure of Connell... permenant member? Who else is on board for the release? Will Aimee be back on board for the split?
The sessions (basic tracks only so far) that RICH HOAK and I just did for the upcoming LACK OF INTEREST/BASTARD NOISE split 12" L.P./c.d. (for DEEP SIX RECORDS) feature RICH only as a "guest skull". Rich is so busy with BRUTAL TRUTH, TOTAL FUCKING DESTRUCTION and family stuff, it would be impossible for him to lend any further assistance to us beyond what he has graciously offered. He was asked by me because of our long standing friendship and his amazing talent as a player. This IS the next BASTARD NOISE recording to be featured by our home label DEEP SIX RECORDS. The only difference is BN will contain HOAK on drums and not CONNELL who has left the line-up by his own choice. Yes, Aimee is on board for this release as she is a permanent "skull" to BASTARD NOISE. We will have a "guest" vocal appearance that we are really excited about as well. On one track, MITCHELL LUNA (formerly of MARUTA) will assist Aimee with the "voice ordinance" !!

In addition to this Lack of Interest split and a forthcoming Aunt Mary split reiusse, what other irons do you have in the fire? Can we expect another new LP soon?
Well the A.M./M.I.T.B. thing will be produced in 10" 45rpm format to hopefully bring out more fidelity in the original "primitive" recording. We really looking forward to this as this early M.I.T.B. record is very much liked by alot of those that have followed both bands. Special packaging and extensive liner notes will also be featured.
We are next going to work on a BRUTAL TRUTH/BASTARD NOISE full length split 12" L.P./c.d. that WILL be released this year and then a new studio full length !! 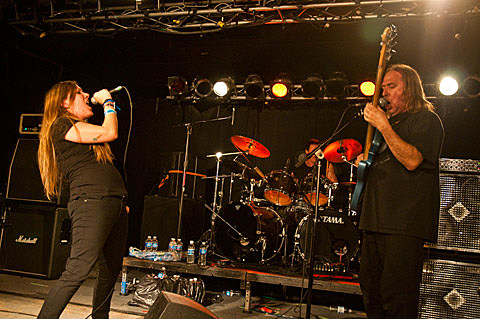 You recently introduced the "Pro-noise Audio Series", a set of freely distributed releases featuring "the skull and individuals the skull has had the honor of working with". Are these pieces limited to digital only, or will some ever see a physical product? What else is on the way?

Well actually PRO-NOISE.COM is Jay Randall's digital label COMPLETELY dedicated to experimental noise/electronucs, etc. I have nothing to do with it. The only release we allowed Jay to issue (so far) is the out of print 12" split L.P. "SKELETAL UNCERTAINTY" between ACTUARY and BASTARD NOISE that was originally released on LOVE EARTH MUSIC. He is a trusted friend and I would not have gone for it any other way. There is a TON of digital labels out there that "do the minimum" and that shit is for losers when then are no graphics/liner notes, etc. Computers are souless enough. PRO-NOISE.COM is for real. I am not sure what will be next but more than likely, it will be more obscure or out of print type sound offerings for the label. BN has ALOT of PHYSICAL releases coming including a full length collaboration between GOVERNMENT ALPHA and BN on 12" L.P. this summer.

Considering the series and your overall punk rock ethos, what are your thoughts on freely distributed music?

Well in general I find it harmful and lazy... Like I said, if it wasn't for the trust I have in Jay Randall, I wouldn't fucking bother.

There has been a lot made about your reaction to the use of the Bastard Noise skull. How do you respond to the criticism that A/F was re-appropriating a logo that you yourself appropriated somewhere else? What are your thoughts on other members of MiTB chiming in with their own opinions?

I don't. I already did. Miles and I are hugging and kissing now. My thoughts on two of the M.I.T.B. members chiming in? It figures. For the record, I chose this "battle" on my own. 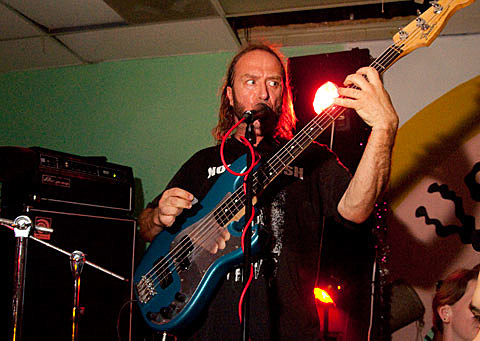 You said that you overcame addiction in the middle 2000s, which eventually lead to you picking up the bass again. What would you say to current musicians that look to you for inspiration and may have an addiction problem of their own?

Yes that IS correct. It was the hardest thing I have ever dealt with. I mean this with everything I have in my soul. My advice to any musicians that are "in the grip" of addiction would be #1) YOU have to want sobriety. There is no chance of truly shaking the demons of addiction without you yourself wanting it more than anyone else #2) Only be in the company of those who insert 100% positive energy into your recovery. Addiction is negative enough without any outside assistance. #3) TAKE EACH DAY AS IT COMES. #4) Learn to love yourself from within.

The Bastard Noise sound has shifted from a purely noise focus to something that more closely resembles MiTB although in a completely different direction. What prompted the change? Do you ever see yourself changing direction again?

Well initially what prompted the change was the constant positive influence of W.T.NELSON upon me while we were together in BN post my addiction. He would always just tell me things like: "You are great musician and you should pick up the "FOUR STEEL GIRDERS" again" or "When you are ready, we should slowly incorporate your bass into the BASTARD NOISE in compositions and in our "live" set. (This was especially being communicated to be between the years 2004-2007) It really "sunk in" to my psyche and ultimately I was given a bass by KENYON (through my best friend Greg Heiman) and began the excruciating ordeal of relearning bass from scratch. It took nearly eighteen months to get back what I had lost (my arm muscles were out of condition and my agility was shot but I kept at it until I was mentally and physically ready) Shortly thereafter I was connected with Danny Walker by a great contact and supporter Martin De Pedro. Danny is a phenomenal talent on drums and we wrote the BN portion of "THE RED LIST" with W.T. NELSON (electronics) in about 5 weeks. Of course we then acquired CONNELL (M.I.T.B.) after Danny got too busy when we returned from touring Japan in 2009. "A CULTURE OF MONSTERS" and "SKULLDOZER" were both written and recorded with CONNELL on drums and last year (October/November) BN toured europe and upon returning CONNELL left by his own decision. He wasn't interested in being an equal member of the band and refused to ever tour again. Aimee (ARTZ) and I have long term goals and desire with this band and could never allow anyone to kill our beloved band so we went searching for a new drummer and found it in Jesse Appelhans (formerly of UPSILON ACRUX) - he is our new permanent drummer and is currently mastering all of CONNELL's content so we can tour and perform "live" once again. Jesse is incredible and grateful to have a "driven" unit to participate in and Aimee and I are HONORED to work with him. Just so you know, BASTARD NOISE still performs as an electronic/vocal unit as well. BOTH sides of the band exist side by side.

Aimee of Bastard Noise at MDF 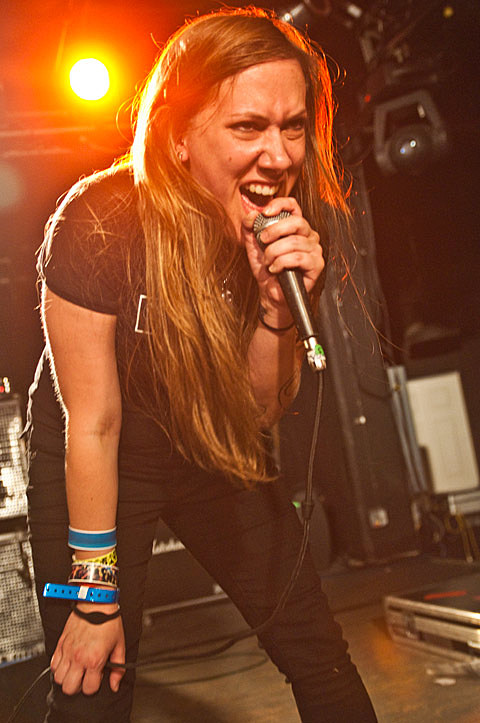 Is there any touring in store for The Bastard Noise?

Yes BASTARD NOISE will be touring Japan this summer. A special tour only 7" e.p. will be recorded with our new drummer Jesse for this special occasion !! Brand new material for skull servants to feed on. After Japan, we would like to do an extensive U.S. tour but when that happens right now is up in the air. We really want to tour with RETOX but we will see if both bands can coordinate such tour.