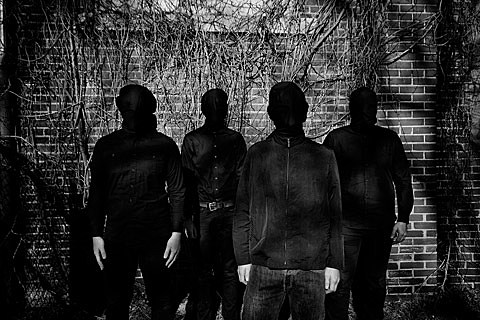 Some may see Louisville punk band Black God as a continuation of the mighty Black Cross, but with songs like these, they definitely should stand on their own. Black God, made up of BC members Ryan Patterson (also Coliseum) and Rob Pennington (also Endpoint/By The Grace of God) as well as Nick Thieneman (Young Widows/Breather Resist), and Ben Sears (Mountain Asleep), is welcoming their second seven-inch via No Idea TODAY and are streaming that in full for the first time below.

We asked Rob Pennington and Ryan Patterson a few questions about the Black God project, the comparisons to Black Cross, the current status of Coliseum and Endpoint, and more in an interview that you can read, along with the 7" stream and a full live show video, below...

How did the Black God project come about?

ROB PENNINGTON: The momentum behind Black Cross had dwindled and for me it was about continuing to play with Ryan. I really enjoy the music he writes and I was itching to be surrounded by it again. Nick and Ben, both amazing guys and musicians, signed on and we were ready to go.

RYAN PATTERSON: We had a few years of inactivity with Black Cross, mainly due to Coliseum and Young Widows' busy schedules, and our occasional attempts to kick it back into gear never materialized. Since Rob and I had played music together in Black Widows / Black Cross, we just decided to do a new band together to continue the collaboration and have time to actually hang out via band practice. Nick was the final Black Cross bass player so we asked him to join and Ben was a younger guy we'd all wanted to play music with for a while now.

You have two seven-inch releases under your belt, what is the plan for a full length? Is there one?

ROB: No full lengths, we must adhere to the Black God code.

RYAN: Punk rock really thrives in the limited format of the 7" EP. In order to keep this band simple and stress free we decided to keep the band a 7" only endeavor. No song over two minutes, no record over six songs, no size larger than seven inches. We will strictly stick with that plan until we randomly decide otherwise.

Are there any plans to tour as Black God? Regional or otherwise?

RYAN: We want to do some short tours, but it's very difficult with all of our schedules. It would be fun, but touring is not the focus of this band. It's more about quick and exciting bursts of creativity. 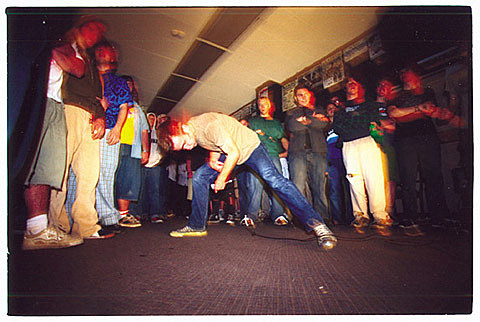 Most of the latter day Black Cross have reformed as Black God. Why not revisit the Black Cross moniker despite the change in sound? Are there any plans to revive Black Cross... revisit some of that material either as BG or as BC?

ROB: Not everyone in BC was interested in continuing forward. BG brought about an opportunity change it up musically and play with Ben (who is great and toured with me in a summer By The Grace Of God European adventure). After 20 years of this, I find that changing things around is a necessity.

RYAN: The core members of Black Cross were Rob, my brother Evan, and me. Without Evan it's just not Black Cross. I don't think there's all that much of a change in sound, these songs are just a little less obsessed-over and more to the point. We have considered playing Black Cross songs and may eventually, but I am generally not a fan of new bands clinging on to their old bands legacies, it seems a little cheesy to me. But who knows... Sometimes fun trumps my uptight opinions. All that said, it's not like Black Cross was a very popular band or managed to do a lot of touring. We were a very small band. We never made it to the West Coast or Europe, our tours were mostly limited to the Eastern half of North America and we only did a handful at that. It was important to us and very fun, but it's not an entity that looms that large over our current activities.

--
Ryan (right) with Coliseum at Union Pool (more by BBG) 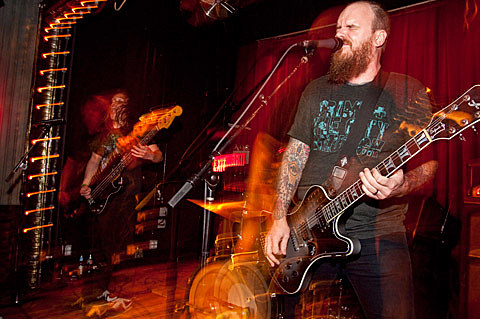 What else is in the cards for Coliseum in 2012?

RYAN: Coliseum is working on writing our fourth album and trying to take most of this year off from touring. We've been a band for almost eight years now and we've never taken an extended break from touring. It will be good to give ourselves and our fans a break. We'll probably record this fall and release the record early 2013. We already have six or seven songs written and we're very excited about the direction of the new tunes. We'll do occasional one-offs and festivals but it's nice to give ourselves a break for once.

Endpoint reunited as part of a benefit in 2010, do you think the band will ever surface again?

ROB: That was such an amazing time and I cannot believe how many folks came out in support of Jason Noble. Well actually I can, as he is an amazing person. It looks like we might do a friends' wedding/gay rights benefit in the Fall. It can't believe that folks are actually interested in us playing after 20 years.

Young Widows is on the road this spring and play Saint Vitus with Pygmy Lush.