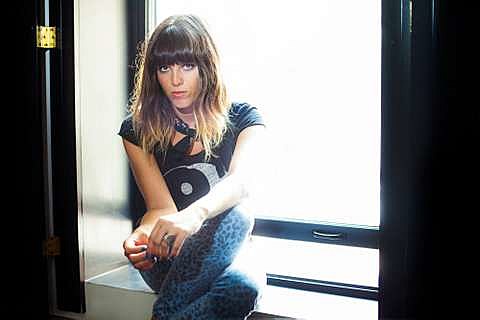 Having previously fronted the more overtly pop My Bee's Garden and The Narcoleptic Dancers, Melody Prochet discovered dreampop, enlisted the help of Tame Impala's Kevin Parker (a busy man this year) to capture the sounds in her head, and Melody's Echo Chamber was born. Recorded at Parker's home studio in Perth, Australia, and at Melody's grandparents' seaside home in the South of France, the self titled album -- out September 25 via Fat Possum -- is a gorgeous headtrip. You can stream a couple cuts from it below.

I met Melody on a very rainy late July afternoon to talk about the new album, finding her sound and how she's going pull it off live. On the latter, NYC will find out in October when Melody's Echo Chamber open for The Raveonettes at Webster Hall.

BV: You had a couple bands before this, very different sound. What made the change?

Melody Prochet: I just grew up, really. I've always been writing songs, and the people you meet they influence you. It wasn't till I was 19 that I heard the kind of music I listen to now, so for many years it was a different style. I hadn't digested all these new things.

Was there a certain record or group you heard where you were like, "Yes! This is the kind of music I want to make!"?

How did you end up working with Kevin from Tame Impala?

Two years ago my old band My Bee's Garden supported Tame Impala in Europe. We got along and we shared a lot of songs and it just blossomed into collaboration. It started with just a couple songs but it was really easy to work together. Complimentary opposites.

You say it was easy, but as a listener it sounds very dense and layered, like a lot of work.

I wasn't hard to make, it was very organic and natural. Most of what you hear are first takes and we did the drum sounds in two seconds. We put mikes on a pile of bricks in the yard because we didn't have professional setups. It was a very natural process, making the record. But I know what you mean, the production is really cool. I'm obsessed with production, though I'm not really good at it yet myself. I have the vision, but I need magic hands to do it for me. This record was my dream sound. I've tried for years to get it but finally found the right hands to sculpt it.

Did you come in with songs or was it more born out of the studio?

I came in with songs and some basic recordings but it was messy. Kevin helped figure out what we could keep, how to organize that mess. I tend to write pretty and dreamy songs -- I studied classical music for 12 years -- but I was boring myself so Kevin helped destroy everything and put it back together, find the right balance. I think we did pretty well in that way.

Have you played it live?

We've done two shows. The first one was intense because we didn't get a chance to soundcheck, but it was all right. The second show was supporting Atlas Sound and it went so well. I think it was my first show every I enjoyed, felt like it was good enough, and felt comfortable.

Has it been hard to replicate the album's sound live?

Kevin helped with that as well, putting the album's sounds -- the Junos and all the gear you can't take with you on tour because it's gonna break -- so we just sampled all the sounds and put it on a keyboard. I think its gonna sound really good. 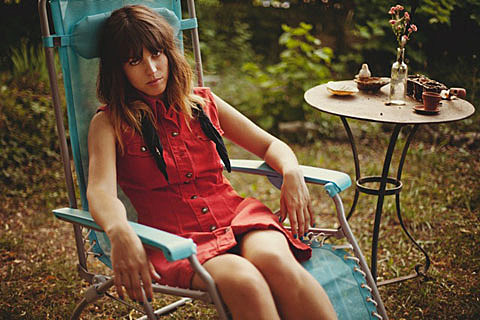 How many people are in the band?

Four and they're people who used to play with me before, they're all great musicians. It's going to be hard. I would love to have Kevin to play drums with us -- there's no one as good as him I think...

He's busy himself this year.

Yeah, of course. Tame Impala's album is brilliant. I'm looking forward to people getting to hear it.

Have you talked of touring together?

No, that might be too much. I don't like to be too related to it, too intertwined. But we'll probably end up playing a few together. Maybe in Australia.

That's where you made most of the album, right?

Yeah we did all the instrumentals there in his studio that's in a house he shares with the guys in Pond. They're fun guys. I wrote some songs there too while he was on tour. I plugged the guitar into the preamp but it was all this gear I didn't know how to use so I did the best I could, made it work. And we ended up using it even though it was "wrong"... we couldn't replicate the vibe of the original recordings.

Sometimes not knowing what you're doing is good.

Absolutely. Those songs were also the first time I sang in French. I never had wanted to before, it never felt natural -- I've listened to so much English music. And you can sing more ridiculous things in English. I've always been a fan of French singers but maybe I never thought I was good enough. But there by myself and talked to myself and it just came out. I found a way to write really simple, poetic lyrics. Childlike, maybe? I think I found the right balance.

Speaking of childlike, one of the more striking songs on the album is "Be Proud of Your Kids" which samples a young girl. Who's kid is that?

I used to babysit kids and I just recorded them all the time, because it's so inspiring. It's like they're tripping or something. So I just recorded it on my iPhone. If you understand French it's really funny stuff she's saying. I'm not gonna translate it all but it is hilarious. We were playing this card game, and to start the game you do this little song but her version was really weird. She's just this super amazing little girl, that one means a lot. She's six years old now and I think later she's going to make records.

Do you have brothers and sisters?

Yeah, one older brother and one older sister. Growing up was really musically intense. My brother listened to Vangelis really loud, he was a keyboard nerd. Jean Michel Jarre, all that stuff. He was building his own studio and he actually recorded my first songs. It's really bad (laughs). It was like R&B. In the South of France that's all the radio stations played. I didn't know anything else.

You said you have a classical background. Did you play any on the album?

A little bit but I didn't have any good instruments. I just have this tiny viola. I tried but it didn't sound that good. It would need a big one. So that's my big goal for the next record is to do the string arrangements. Or at least put them through a lot of crazy effects.

The vocals on the album... they were recorded in France, at your grandmother's house?

Yeah at this house on the beach in the French Riviera which is heaven on earth. Not in summer when everybody is on holiday there, but in the Spring. But the house is being sold right now, it's pretty sad, so I had to go there to do it, one last time. I also needed the isolation. I'm so self conscious, singing in a room with people.

So Kevin just sent you there with a laptop and a good microphone...

Not even a good microphone. It was like a Shure 58. We didn't use any professional anything on this album. My old projects were done at big studios in Paris and it was so cold and not fun and the mixer would take three hours just to make a drum sound. I was always so bored, my inspiration would be gone and I'd just want to go get a beer. And with Kevin it was like one minute maybe. I was so worried at first when I saw his studio and it was such a mess, I was like "oh no." But he was so proud of it and I was "uh yeah that's great." (Laughs) But then he'd just set up a mike at the drums and just the dry recordings were exactly the sound I wanted.