Undisputed Wes interviewed and photographed Shara Worden of My Brightest Diamond this past weekend. Her new album Bring Me The Workhorse is out today (August 22, 2006) on Sufjan Steven's record label Asthmatic Kitty (it got an 8.1 @ Pitchfork ).

Shara's vocals can also be heard all over Sufjan's Illinois album, and she's an integral part of his touring band. Her CD release party will be held at the Spiegeltent in NYC this Thursday August 24th at 10pm, and she kicks of a U.S. tour with Sufjan on September 11th. 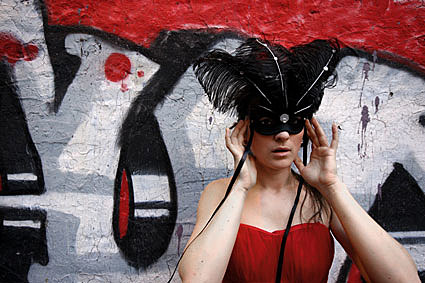 Wes: One of the first times I saw you perform was at Cross-Pollination with Dave Deporis almost a year and a half ago. Now you are releasing your first record as My Brightest Diamond called Bring Me The Workhorse. From that show to this record your sound has become somewhat less ethereal and your song structure seems more focused. What caused that evolution?

Shara: That's interesting that you say that. Someone just wrote to me about how they felt that when the song "Dragonfly" (watch video here) first started it was more ethereal and ambient. I think a lot of that has to do with the choices I made for Bring Me The Workhorse arrangement wise. I was trying to a. make a cohesive work and b. not be too noodly. Something that was not precious. I think that I am writing songs that still have that eccentric and ethereal quality to them, but there is a different format for those songs.

The next record, A Thousand Shark's Teeth, will be a string album and more ethereal, less rock. That's a distinction I had to make because I basically had two records. I was trying to make them work together, but they just didn't like each other. So I thought: This is me trying to cram in too many ideas for one album. Let me just make something cohesive and separate these two records.

Wes: Was it a natural move for the record to be released on Asthmatic Kitty after working with Sufjan?

Shara: Yes. Sufjan has been telling me for a couple of years that he wanted to support me in any way that he could. I was hesitant at first because I didn't know them and how they were as a label.

Wes: Does this predate you playing and recording with Sufjan?

Shara: Yes it does. But then I was able to tour with him and meet the people at the label, see over the course of time how they do things and what their intentions were with me and I felt really comfortable with them.

Wes: Do any of your fellow Illinoise Makers appear on the album? 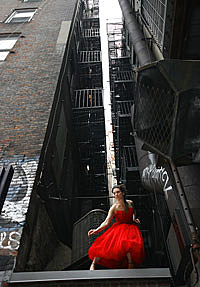 Shara: No, in fact the string players I played with before ended up working on Sufjan's Illinois and now they'll go on tour with the both of us. So it's all a blend now without ownership or anything like that.

Wes: You mentioned A Thousand Shark's Teeth, your next album. Do you have any recording or release plans for that one already?

Shara: The string parts for that record were recorded two weeks before I recorded the current album. I just finished the lead vocals of five of the tunes last week and there will be more recording in the winter. The release will not happen until late summer of 2007. Before that we're doing a remix record of the current album this winter.

Wes: Who will be doing the remixes?

Shara: Several people. Alias, his remix is awesome. Lusine, Siamese Sister and Sufjan's drummer, James McAllister, did a remix. If Sufjan has time he may do one too.

Wes: In a similar vein perhaps I just listened to "Razorblade Salvation", a new Jedi Mind Tricks song that samples a piano part of Sufjan's "Dumb I Sound" and it features your lyrics and vocals. How did that come about?

Shara: They approached the label about using the Sufjan sample and the producer had heard some of my stuff and asked if I'd be willing to lay down some vocals. A couple of weeks ago I went into the studio for 3 hours, wrote lyrics and recorded three songs. It was interesting because I had complete freedom. There was no producer, no artist, just me and the engineer. I had the song title, the music but none of the raps. It was so fun. I had a blast.

Wes: Was that a musical avenue you'd ever expect exploring?

Shara: Well, I grew up near Detroit and I was listening to all kinds of soul and motown, early 90's rap. So that's my history not really out of context for me.

Wes: So who were your favorite rappers?

Shara: Ice Cube, Heavy D, even Too Short. I listened to all of that stuff.

Wes: Your earliest musical influences (grandfather, dad and mom) and your first performances were all church music related. Does that still resonate in your music now?

Shara: I don't know if you can still hear the gospel music. I think I would attribute more to Soul music than I would to Gospel music. In a lot of ways culturally those two are intertwined. I use language of heaven and hell to represent ideologies. Something of an End (MP3) for example says heaven and hell come crashing. It's like you have these ideas of how you exist in the universe, what it means to be alive or dead, or what gravity is, almost what the laws of physics are. And so heaven and hell is more representative of the constructs of how you think the world operates. Then something happens in your life and everything that you thought about the way the world was turns out to be not that way.

Wes: Are there any particular artists that inspire you or that you have been listening to recently?

Shara: I just heard about Stars Like Fleas and they're playing this Tuesday at Tonic and they sound really cool. They have like saw, harp, laptop, a 15 piece choir. Cool, crazy stuff. I recently bought all of Scott Walker's records. He just came out with a new record called The Drift. I love Dave Deporis and Diane Cluck. And Dayna Kurtz, she's amazing and just came out with a new record.

Wes: Aside from the new album, the tour and then next year's album, what other musical plans are in your future?

Shara: I was thinking about that yesterday and I think I tend to work in opposites. I see this pattern for myself where I'll do a rock album and then I do something that is quiet. I'm also interested in exploring dance music and I'm in this really avant-garde stuff like Scott Walker. Definitely what I can say is that I want my song structures to loosen up. Right now they are not fluid as I would like them to be. We'll see, it's a year and a half down the road. I have a feeling it will be the opposite of the record after this one, but it's hard to say what I'll be interested in. 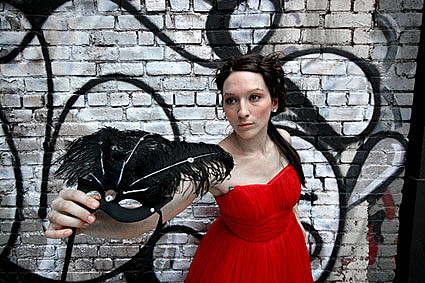 Catch My Brightest Diamond on tour.

Wes took all the above pictures too. More from the same photoshoot at Flickr. 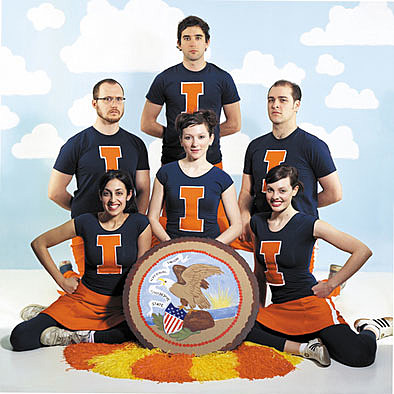