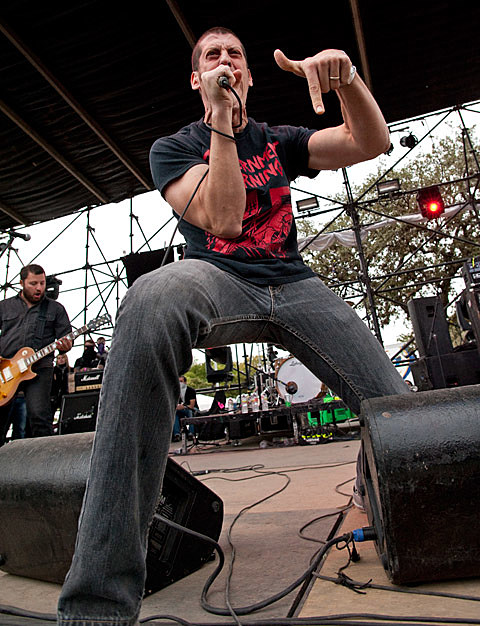 Pennsylvania's Paint it Black have returned with a new 7" due on No Idea Records, Invisible, which is available for preorder now. It marks the melodic hardcore band's first effort in four years, and they've has offered a pair of tracks for streaming in anticipation of its mid-April release. Check out "Greetings, Fellow Insomniacs" and "Headfirst", the latter of which makes its debut here today.

In celebration of PiB's righteous return to the studio, we cornered frontman Dan Yemin (also Lifetime, Kid Dynamite, etc) and bassist Andy Nelson (also Ceremony, etc) about the new release, being an elder statesman in punk and what the future holds. The results of that conversation, those song streams are below.

In the preorder for the 7" you speak on the long road to creating the new release, from a personal level. How do you think your personal perspective on punk has changed over the years? Who is an artist that you looked to for inspiration both creatively and from a punk aesthetic?

Dan Yemin: In some ways it feels like there's more at stake. The things that made me so angry when I was younger still piss me off, but there's also a layer of pretty intense sadness that comes along with my sense of how the world works, and the multitude of ways that it's broken. This is going to sound really nerdy, but discovering punk at 15 years old excited me in the same way that science fiction had 5 years earlier: it was all about possibility. It gave me the hope that things could be different at some point in the future. I still have that hope (although I struggle with cynicism), but there's more at stake now because the political songs are about imagining and building a better world for my kids.

The artist that inspired me most directly over the past 20 years has been Sarah Kirsch, who was in at least a dozen important bands, most notably John Henry West and Torches to Rome. DIY as fuck, political in way that was always deeply personal, genius guitar playing & songwriting. She died last year and a lot of things are coming full circle for me as a result. MacKaye may be the obvious answer, but for me Kirsch is just as crucial.

With these new songs now in the can, is this a taste for something larger on the horizon?

Dan Yemin: There's no need for anything larger. The album is a dead format for us. This is complete.

Are there any plans for live dates in the near future? Regional or otherwise?

Dan Yemin: Our record release show is here at home in a few days. We're planning to get out to California and hopefully back to the UK this year.

You all are individually involved in projects outside of PIB. What are some of the statuses of those? Ceremony, Kid Dynamite, Hope Con, Lifetime etc
Dan Yemin: I'm sure all of those bands will be doing something in 2013. I'm most excited about the new band that Andy and I are doing with our friends Chris and George. Hope to start playing shows this spring.

Had a conversation recently about punk/metal and indie and the fact that bands like Ceremony, Fucked Up, Metz and Pissed Jeans are somewhat of token punk bands for the indie crowd, who tend to not veer too deeply into the genres. What are your thoughts on that? Do you feel a certain sense of responsibility as a band that comes from a different background to help expose worthy bands to a crossover crowd?

Andy Nelson: Responsibility? No. Who do we have to answer to? Last year, Ceremony found ourselves in the enviable but strange position of being thrust upon the indie rock masses with very little context aside from our reputation for being this wild and fast hardcore band (a reputation that anyone familiar with our full discography will agree is limited in scope). So while we did get added to the list of token punk bands that lots of people now know the names of, it was a bit of a double edged sword as we found our most recent record being judged against a bunch of heretofore unfamiliar strangers' perceptions of what it was supposed to be, rather than what it actually was. I'm not complaining, of course, but that particular kind of exposure can work against you just as easily as it helps you. One thing that's nice about our current state, though, is that punks give us a less hard time than they used to about playing shows with diverse lineups, it's become expected that you're just as likely to see Permanent Ruin or Caged Animal on a Ceremony show as you are The Soft Moon or Chelsea Wolfe. The only motives behind that are playing alongside people who we respect in bands we like; if we happen to expand anyone's ideas of what to expect at, say, a 924 Gilman Street show in the process, that's great. But things like "exposure" and "crossover crowd" never come to mind -- I think you'd have to be pretty cynical to operate that way.