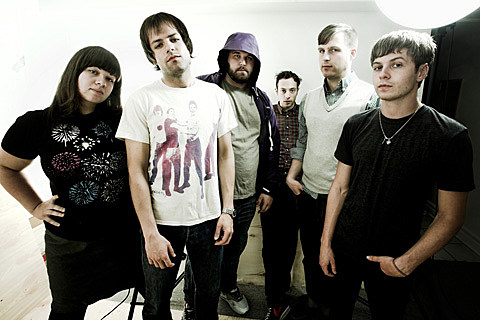 It wasn't that long ago that Canadian hardcore post punkers Fucked Up announced their indefinite hiatus. Unlike the all too chic hiatuses wrought upon the otherwise unsuspecting horde of fans, followers, and tweeters, Fucked Up were taking a break for the sake of family. That's the thing. Despite winning the 2009 Polaris Prize, multiple Best Of features, and the damn near universal acclaim from critics and fans alike, Fucked Up is essentially a side project for its members. When life provides the opportunity for the members to come together and create more music, they end up creating something like David Comes to Life. It's a fascinating thing to consider when so much of Fucked Up's music concerns the suburban odyssey and the inherent dangers of domesticity.

Having recently announced a tour including a few US dates, the concerns of fans have been allayed at least temporarily until the new album (yes, they're working on one) comes out. I had a chance to shoot lead guitarist Mike Haliechuk a few questions about the band's success and what lies ahead.

What's your journey as a fan and musician been like from the point where you knew this was something you wanted to do to where you are now with Fucked Up?

Very random. When we started the band we had about as much aspiration to be musicians as talent, we just wanted to do a few 7" singles. We still don't know if this is something we want to do. It's just better than most of the alternatives. We never went through the stages of trying to make it, or do music for a career, it just sort of happened.

What do you see as the biggest challenge facing those who wish to make music with integrity in our current sociocultural climate?

Trying to balance making a living with the compromises wrought by sponsorship and non music-money in the music industry. I don't want to say corporate money, because it's almost an irrelevant term today. But today more than ever making music with integrity means more than just what your lyrics are like or what the aesthetic of your band is - since people have access to such a wide part of a musician's personality and lifestyle, the way you carry yourself in every aspect of your work is up for debate and view, which is a good thing. But it's hard for a smaller scale band to make ends meet without taking money from sponsors and shit like that, because big companies are involved in every festival, have their own record labels, sponsor individual shows, etc.

Fucked Up (Mike in center) at the Polaris Music Prize 2012 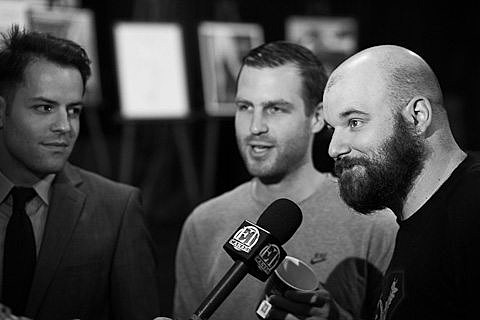 From the initial creative spark to the formation of a song, what does your creative process entail? What headspace do you find yourself in when creating?

For us it's not about a creative headspace. Writing music for us can be as mechanical as going on tour, or anything else. In the cycle, eventually it just becomes time at some point to write a new record, so we do. We used to be writing all the time and would put out a single every five or six months. Now we mostly just do albums and longer 12" singles, so it's really about finding the time to take a few weeks or months to write. Then after we've got a big chunk of songs together, we'll end up in the studio like a year later..and then another year after that a record will come out.

What are your thoughts on the rise in popularity for harder/heavier music? Indie rock tends to get the reputation for being passive, yet Fucked Up go against that notion. Why do you think more fans are listening to heavier music?

I guess everything just has its time. We're not really indie rock, and I wouldn't really say we are particularly not-passive. We just play music, other people have to sort out what it is right? Anyways, I'm not really sure why heavier music is on the rise, and I'm not really sure it is or not? I've always listened to that stuff, so it's hard to say if more people are hearing it. I know that more black metal stuff gets reviewed by Pitchfork, but I think heavy music has always had a pretty strong audience. Bands like AC/DC and Nirvana and Metallica were massive when I was a kid - I'm not sure bands like that (other than those exact bands still existing) have modern corollaries. I know bands like Bring Me the Horizon and that kind of heavy stuff is popular, but not nearly on the level of heavy bands from when we were kids.

You guys are about to be back in the States to tour again. How have you seen the response to the band grow over the last few years?

Yeah, kind of, I guess. We haven't done a US tour in a few years, so it's really hard to say. Every time we go out it's a new crop of kids. Some people stick with us, but we sometimes play to an audience that is really there when you have a new record out. But I mean our first tour we were playing in squats and dorms, so yeah, I guess it's grown since then.

What's the progress on a new album?

It's getting there. We're doing it piecemeal, so it's taking forever, but it's gonna be cool.

Filed Under: Fucked Up
Categories: interviews, Music News
Comments
Leave A Comment
29 New Songs Out Today
Fucked Up share “Cicada” from new album, add NJ show to tour
Our favorite songs of the week (playlist)
Fucked Up share “I Might Be Weird,” announce US & UK tours
38 Hardcore Releases We’re Anticipating in 2023
High Vis discuss their favorite music of 2022