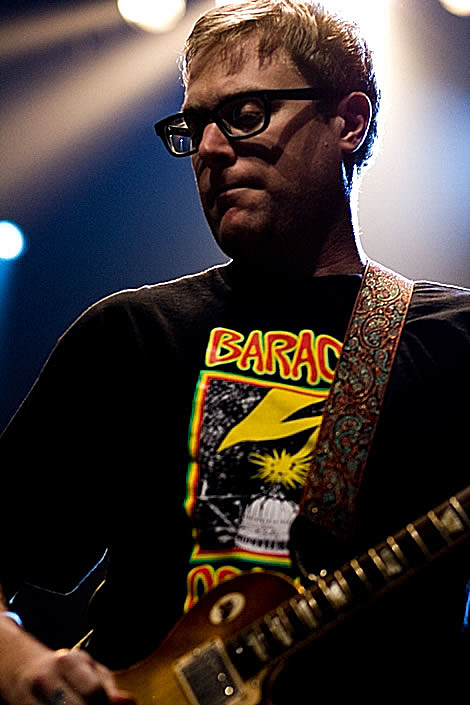 Brooklyn's own rock prophets, The Hold Steady, recently played another sold out hometown show at Music Hall of Williamsburg. The critically lauded quartet will release their sixth album, Teeth Dreams (Washington Square) on March 25. Two of its songs are already streaming online. It's a new step for the band both from a label perspective (they were previously on Vagrant) and from a creative one as well. The band's last full-length release was 2010's Heaven is Whenever, providing the longest duration between albums since The Hold Steady's inception. BrooklynVegan spoke to guitarist and founding member Tad Kubler about the new record, the pros and cons of playing Brooklyn, and the band's PledgeMusic Campaign.

BV: With Teeth Dreams coming up, this is the longest the Hold Steady has gone between albums. What's the direction like for you guys on the new record?

Tad: I don't think it's radically a different direction. I think with every new record, one of the goals I always have is to try to be more musical. You try to write better songs. And when I say "better," I mean when you're playing music, there's something you stumble across occasionally, and you have some kind of emotional response to it. And when people hear something, they'll respond to it. I guess when I say "writing better songs" it just means being more concise or something like that than having sort of self-indulgent stuff happening. There's some stuff obviously that you do because you enjoy it, it's fun, and you like doing it, and there are other things you do because you have a connection or reaction to it. Anybody that tries to do something creative or tries to grow as an artist - those are the moments you try to look for.

BV: Was this a kind of period of reflection for the band just given that space of creative time?

Tad: Oh yeah. Absolutely. We were working at such a pace that I don't think - I think we knew we weren't going to be able to really withstand that as a band. It was really fun while it was going on, and while we were in it, but there came a point where it was just like - "Okay, you know what?" But the momentum carried us so far, and the momentum was great, but one thing I think I really realized was happening was that we were just reacting to the things that were happening and trying to keep up with everything, kind of. And it prevented us from making any real deliberate decisions about what we wanted to do, because we were always sort of in crisis mode or reacting to what was going on or just trying to keep up with everything that had happened. Kind of by hitting the brakes and everything and slowing things down, it allowed us to take a breath, and step back a little back, and kind of figure out really what we wanted to do. I think that was part of the reason for the time span between our last record and this record. The other part of it, too, is you get a little bit older, you start to grow up a little bit, and everybody kind of gets lives. People have wives, and kids, and girlfriends, and families, and other projects they get to work on. I've always said that one of the things I'm most grateful for is that we've gotten to a place with the Hold Steady that's allowed us to have other opportunities, and to meet people we have a lot of respect and admiration for, and work on all kinds of stuff. That happens too, other than just life, and you want to take advantage of that when it comes out. It was certainly intentional, and we just needed a break.

What are the hometown shows like for the Hold Steady? Are you guys more relaxed with those, or is there an added layer of pressure just from a performance perspective?

There are two different answers for that depending on what kind of mood I'm in, I suppose. [Laughs] I'll get the first one out of the way. You know, they're always kind of a handful and kind of a hassle, because especially if we're playing some place like Music Hall. The show sold out really quickly, and you've got your friends and your family who all wanna go and hang out and see you and enjoy the night of a rock show and stuff like that, and that can become kind of overwhelming at times. You just kind of want to go and do what you do and play a great show and think about music and not have to sort of feel like you have to take care of a lot of other stuff. But the other part of it, too, is this is our hometown. Growing up in Wisconsin, and then moving to Minneapolis, and then coming to New York, finally, and really having New York for me be the apex of all things creative and musical and everything else - to think that we have this band and this is what we do, it feels like we built this, and this is fucking great. I think there's a lot of gratitude that's involved with playing a show in Brooklyn, or in some place like Music Hall. Music Hall is also one of my favorite stages in the world. It's the perfect size. It's exactly as wide as it should be. It's exactly as deep as it should be. The room sounds great. It's big enough to be loud but small enough to still feel like you're in a room full of people. It's a great experience.

With the PledgeMusic Campaign, I'm curious as to what your thoughts are just with regards to the fact that our culture, American culture specifically, is such that musicians and artists are essentially placed in positions where they have to crowd fund certain projects or releases.

I think there's a difference between having to do something that's crowd funded and wanting to do something that's crowd funded. Once again, our decision to do something through Pledge was a really deliberate one. The Pledge Campaign wasn't necessarily about wanting to make a record, so much as it was about us being able to kind of grow the Unified Scene and community around the band. I looked at a lot of other alternatives for this, too, and we need to be able to set up some kind of platform and infrastructure to be able to just keep in touch with everybody better. And when I say that, I don't just mean the regular social media outlets. I really wanna try - and we'll see if we're successful in doing this - but try and grow that community and try to create more options to just stay connected with the people that like our band. In talking to Benji and the other guys at Pledge, it seemed like they were really the connective tissue between where we were as a band and where we wanted to go with the Unified Scene - just staying connected with people and trying to come up with and find ways to do that.

How have you evolved as a musician, Tad, and who was the artist or band that kind of pushed you in that creative direction initially?

I think I've definitely grown as a songwriter over the course of the last decade. I think I've become a lot more comfortable with my role in the Hold Steady. As far as who was inspirational? Cheap Trick. Without a doubt. A lot of people focus on Robin Zander because he's the good looking front guy and the singer, but Rick Nielsen writes all the songs, including the lyrics, and he's kind of the Pete Townsend or Noel Gallagher figure for that band, and that was really inspirational to realize that you can kind of be the real creative force in an organization without being the lead person or the focal point of it. That was always really attractive to me.