"I've got better moves than Mick Jagger, or at least I used to," - Robert Pollard 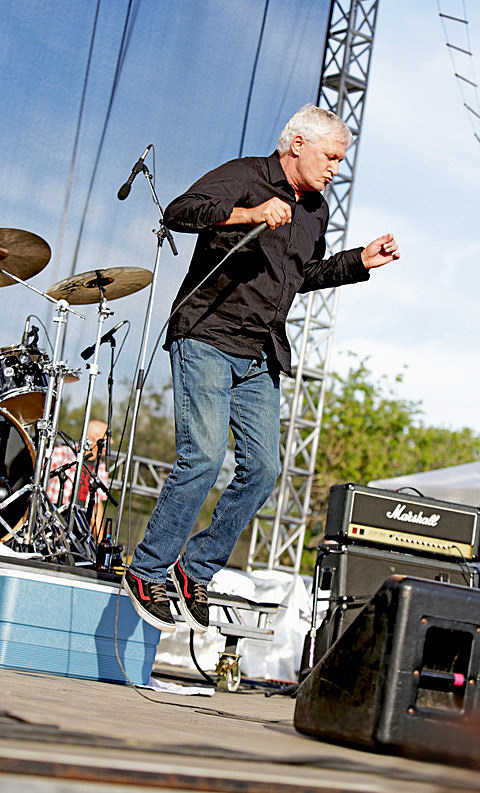 Robert Pollard is a rock star. Instead of having his autobiography written by TMZ or wielding some messianic delusion over his fans however, the frontman for the indelibly influential Guided By Voices has simply continued to make the music he wants in the way he wants as much as he wants. With this month's Cool Planet, Pollard has released twenty-two full-lengths with Guided By Voices since 1987. Add in the multiple EPs, collaborations, solo records, and other projects, and it's immediately apparent that creative inspiration is not in short supply for the singer. Adding to the prolific nature of that creativity is Pollard's unadorned perspective on the fame and respect he's garnered over the years from fans, critics, and fellow musicians alike. There's nothing overly simplistic about it being "just about the music" for Pollard, and that's precisely what continues to compel the singer who, upon approaching sixty, is as creatively vibrant and productive as he ever was with no end in sight. Guided By Voices will be touring throughout May and June, with a sold out Bowery Ballroom show on 5/23 and more dates to be announced soon too.

Going back to the Forever Since Breakfast EP and fast forwarding to now with the myriad of releases, both solo and with Guided By Voices, that have come since then, what's your perspective on that journey so far, and how have you seen yourself evolve both personally and musically in that time?

Robert: Hopefully I continue to improve as a songwriter, a person and a musician or artist. If there's no improvement, and I guess that's a subjective thing, I don't see any reason to continue. Obviously, by the sheer output of releases, I'm still having a good time. That's also very important.

Just as well known as your music itself has been the sheer amount you've produced over the last three decades. What was the initial creative catalyst for you in the beginning, and do you see yourself still engaging that source of inspiration even now with every new song you write?

I'm always pushing myself to come up with new techniques for creating art and writing songs. In the last couple of years I've actually developed a formula for writing songs, that's a little too involved for me to elaborate on right now. The initial catalyst for me to write songs, I think, was to be an active participant instead of just a passive listener. To hear more of what I really like by writing them myself.

There's always been a bit of a darker shade to your lyrics, and I'm curious to know what specific things in the world you find most rewarding in the sense that they provide you with what's a seemingly endless source of inspiration.

Literature, art and rock music. I really like and am inspired by the more surreal side of the various genres in those fields of art. I also get a lot of ideas from just hanging out with people in bars. I'm interested in words and visual imagery and I break down, take apart and re-assemble what I see and hear. I'm inspired by other people who I think are interesting and I read a lot of biographies.

Guided by Voices has already released one album this year with Motivational Jumpsuit, and now you guys are gearing up for the May release of Cool Planet. Does the creative process or approach deliberately change with each release, or is it more of an organic perspective on what direction the music will take?

I've been locked in on the way I approach music and art for a long time now. I work every day. It's an ongoing process and it comes fairly easily so I'm able to be pretty prolific. I know what I like and there is no struggle involved in the process. It's gotten easier and actually, for me personally, more interesting over the years. One simply needs to know what to look for and then zero in.

You began your music career in a heavy metal cover band back in the mid-70s. How have you seen the idea or concept of what's considered a "music career" change in the years since then? Is it easier now for a band like Guided by Voices to challenge ideas, be incredibly prolific, and take risks than it was when you guys first started? Why or why not?

When we first started we didn't know what we wanted other than getting on stage hoping a few people might like us. We played mostly covers and were playing music for a vain purpose. That changed later when I heard bands like Wire and Devo, and then later R.E.M. I knew we could then participate in a more artistic sense. We began playing music for the correct reasons. We weren't concerned with virtuosity. We were more interested in getting a lot of ideas down without regard to perfection or professionalism.

Last year you indicated that English Little League could be the final Guided by Voices album. Two releases later, and you're still here and still creating music. There's something to be said about that kind of longevity and ambition with regards to how many bands today are almost crippled by their own hype out of the gate. Is social media and that constant flow of what's "new" or "hip" hindering our ability to truly absorb and appreciate music being created now thus rendering bands irrelevant, or is it simply that we need to adjust to the times accordingly?

I'm completely out of touch with what's new or hip. But I think big labels and the social media perpetuate a lot of mediocrity in music. Pundits pretending to have a finger on the pulse. And it also includes a lot of indie labels. It's over saturated and you just get confused and lost trying to find something worthwhile. That's why we started our own label, to not be tied up and lost in the shuffle. It used to be easy to find good music. There was just so much of it out there. I think maybe the template has been destroyed, or there's a new one for a new generation that I can't dance with. I will not adjust to the times accordingly.

Billy Corgan just announced two new Smashing Pumpkins LPs . and I honestly couldn't help but think of the now legendary basketball game where GBV beat both Smashing Pumpkins AND Beastie Boys. Could you elaborate on that incident? It's obvious the opposing team were likely unaware that you were a tri-sport athlete with a no-hitter under your belt.

Well, more significantly, my brother Jim was a high school scoring phenomenon, who played at the college level with the third ranked team in the nation. He was just draining it and they didn't stand a chance. They took it well and we became friendly. They're good guys and basketball lovers. I have fond memories of those days at Lollapalooza.

You guys have a few tour dates coming up at some smaller, more intimate venues like NYC's Bowery Ballroom. For you, what's the biggest challenge in translating the energy and unpredictability from the album into the live setting, and are there any more dates (or perhaps even releases) we can expect this year?

It's not really a challenge. We started out as a heavy metal band. We practiced arena rock stage moves before we knew how to play instruments. We're better athletes than most musicians. I've got better moves than Mick Jagger, or at least I used to, and I can fling a microphone around in a more interesting manner than Roger Daltrey. Greg and Mitch bust their asses out there. They're my two little front of the stage gargoyle watch dogs. We have a blast. We've got lots of dates coming up and I've got a lot of upcoming releases, always. We'll be back in the NYC area for some summer shows. We've occupying time and space in a very efficient manner.

Stay tuned for that summer show announcement, coming soon! Meanwhile, check out the dates GBV have already announed along with info on Cool Planet, out TODAY (5/13).