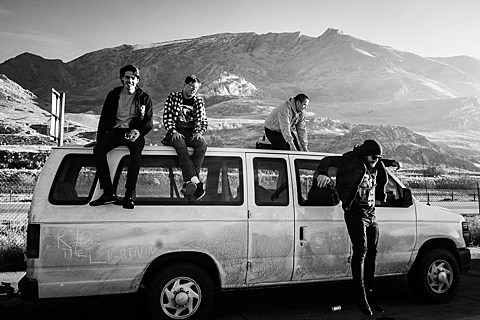 This has been a big year for Modern Baseball . They just surprised-released a new EP, MOBO Presents: The Perfect Cast featuring Modern Baseball via Lame-O Records, they're working on their new album Holy Ghosts, and touring and playing some of their largest venues yet--including NYC's Webster Hall in December. It hasn't all been easy on them though. Co-frontman Brendan Lukens recently cancelled their UK tour -- which has now been rescheduled -- due to his struggles with depression and anxiety. MoBo fans responded with the utmost support and shared their own struggles. Whether the band intended it or not, they're offering a voice to the younger generation that MoBo songs resonate with.

I caught their tour kickoff show at Baltimore's Ottobar on Tuesday (10/27), and it's no surprise that the place was packed. This show was special, considering Maryland is frontmen Jake Ewald and Brendan Lukens' home state. Their parents were in attendance, proudly sporting Modern Baseball shirts. With the place full of fans who passionately sang along to their songs old and new, it's evident that these guys have a strong, loyal fan base that just keeps growing.

Before the show, I had the opportunity to chat with Brendan Lukens and bassist Ian Farmer about their new album, their evolving maturity, and the impact of their fan following:

BV: As a band you've always had this really youthful energy, but with the new EP and what you've said in other recent interviews it seems like you're maturing. When did this start?

Ian: We've definitely grown up. I mean, we're not. It's kind of weird because we're still in school but at the same time we're only in school half the year now. So just being out on our own, we just kind of like had to grow up because that's, you know... I don't know, it just happens.

Brendan: It's natural, actually. It's cool.

The recent Spin piece talked about a U2-ish sound for your new album, Holy Ghost. Did you decide to make these changes from the start or did this come about through the writing?

Brendan: Probably not, no. It's about as much U2 as the EP will be considered U2. It just sounds way better, I think that's the thing. Everyone's used to all of our stuff sounding relatively lo-fi compared to like how much touring we're doing. Definitely a way bigger sound and we all know how to play our instruments right.

And no more social media references

Ian: Jake and I actually just deleted all the social media from our phone as of a month or two ago. I guess that's part of growing up.

Brendan: Yeah. I don't think there were that many references on You're Going To Miss It All, were there?

Brendan: Yeah, that's it. Just once.

You worked with Joe Reinhart [of Hop Along] for this album. How much did he influence the sound of it?

Ian: Sonically, I mean, he definitely had an influence. We were also very much all on the same page.

Brendan: Yeah, that was the great thing.

Ian: We would all suggest something and he'd either be for it or hear it and be like "Nah." He definitely had a ton of suggestions and basically was like a fifth band member for the three weeks.

Brendan: There are times looking back on it now and listening to rough stuff that I'm even like, "Jeez, that was so smart."

Brendan: Just like the little things like "strum up instead of down," and "just move your fingers this way instead of this way" completely changed the tone of the song. 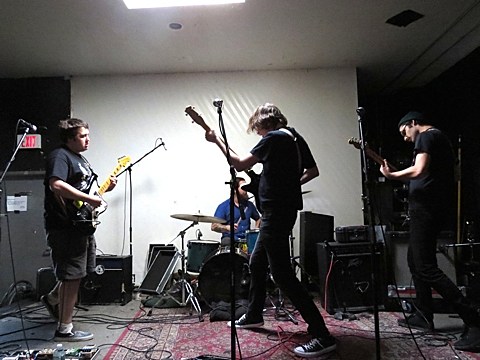 Brendan, you recently opened up about your struggle with depression and anxiety and you've been writing about that in your songs for the album and the EP. Was it easy for you to do that and how did you switch from being playful and silly in other songs and now trying to express that deeper, darker side of you?

Brendan: Well, first I should go with saying that the playful, quirkiness isn't something that we told the world about. It wasn't like we were going out and saying, like hey, we're Modern Baseball, we're a quirky, silly band. That has never happened. We do silly things but that's just how we are as people. I think like even if everyone else saw it as silly, if you know me and you read back through everything it's not crazy to think, oh, he's been dealing with this for a really long time.

Even when we were writing for The Nameless Ranger with the same style of writing, same kind of mindset, it wasn't that hard to open up about it. When we were first starting the band and first writing together, we started Modern Baseball to be sort of like a journal for us to get our shit out, for us to be able to just be honest with ourselves and the ones that we care about around us and I think it is still that today it's just that we've gone through some shit.

You've said that the new EP has really meant a lot to you because you wanted to get it out there in front of your fans and they responded really well to you. How has this positive feedback impacted you so far?

Ian: It's also a thing that you're never -- it's difficult to realize but everybody has their own stuff, everybody can kind of understand where you're coming from whenever you have a certain problem though it may be kind of scary to say it. When you admit it other people are there to get it.

Half of you are about to graduate college and not have to deal with the strains of having to shuffle around your touring schedule with classes. Do you have any apprehensions about finally entering the "real world" and dedicating yourselves to the band full-time?

Ian: Honestly I've been waiting to be done with school for a while because, like, you know, just we're so close that it doesn't make sense not to get the degree but really I just want to focus on music as much as possible because I love it. As corny and dumb as it sounds.

You're newcomers to the Philly scene because you moved from Maryland and New Jersey, right?

Ian: Yeah. We've lived here for a while.

How did you get involved in the music scene?

Brendan: It's just very welcoming. Jake and I wanted to get involved in everything, we wanted Modern Baseball to start playing shows and stuff like that so we were actively looking out for stuff that was going on. It wasn't just a kind of game to us, a lot of it was just our friends giving us shows and us begging to be put on shows and then slowly but surely it became weekenders and then tours and then this tour...

Ian: It's cool because everybody who's going to shows also has a band or has a house or books shows or something. So everyone gets it, everyone's friends, everybody puts on each other's bands.

Were you involved in a Maryland music scene before moving to Philly?

Brendan: No, just because there wasn't really anything or any scene where we were. I come from a very small town. It's not like a place where you have a show that has that. We played one or two shows in Maryland but they were both acoustic and then, yeah, Philly.

One last question. How many people have asked you to play at "Your Graduation" at their graduation party?

Brendan: That's like a thing we get a ton of Facebook messages about. Just like, "Hey, I would really appreciate it if you just recorded like 'Your Graduation' acoustic really fast, send it to me so I can send my girlfriend for like prom." Or like some homecoming thing or "Will you come to my backyard because it's my graduation party?" Stuff like that. I'm going to go up to 100. I'm not going to go past that amount, but I'm going to say up to 100 times.

Brendan: Yeah. Nothing too crazy.

Modern Baseball play North Carolina tonight (10/29), then The Fest, and they eventually hit NYC on 12/11 at Webster Hall (tickets).