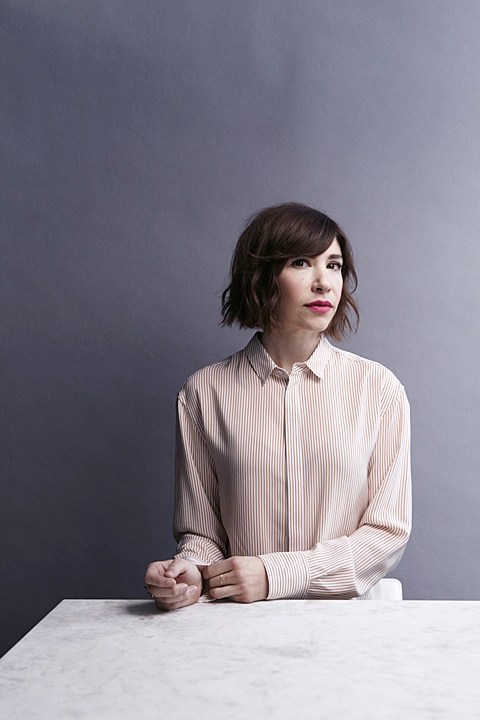 Carrie Brownstein's creative versatility might otherwise be astonishing were it not for the fact that the actor, musician, and writer, is grounded to a familiar commonality in which her fans continue to find comfort and even catharsis. From Portlandia to Sleater-Kinney and everything in between, the trajectory of Brownstein's creative mind remains a vulnerable place of self-awareness and a rare kind of honesty concerning her perspective of her own celebrity. That characteristic is especially present in her newly released memoir, Hunger Makes Me a Modern Girl. A humbling, bare, hilarious, and altogether moving recounting of her life and the challenges both past and present she faces, the book is simply yet another perspective on Brownstein's powerful simplicity and candor.

Season 6 of Portlandia is due in 2016 (with Danzig) and Sleater-Kinney will be going on another tour this year, five December NYC shows included. Currently touring for her memoir, Brownstein just made two NYC appearances this week -- the Barnes & Noble in Union Square on Wednesday (10/28) with Gaby Hoffman and Saint Vitus on Tuesday (10/27) with Questlove. Guests on other upcoming dates include Amy Poehler, Dave Eggers, Jessica Hopper and more.

I recently caught up with Carrie and discussed the tour, the challenges of writing her memoir, and why music remains a sacred space for her:

BV: You've got a number of interesting and influential guests that you're collaborating with on your book tour. Was that something you wanted to do from the outset once you'd finished Hunger Makes Me a Modern Girl?

Carrie Brownstein: Yeah. I had interviewed both Lena Dunham and Kim Gordon on their respective book tours, and I really liked the conversations I had with both authors. I felt like what I wanted was to bring together a group of people that would each have a different perspective or take on the book, so that each night I was essentially having a different kind of conversation, so that I would never sort of be on message. I'm not somebody that feels I'm on message or on point very much in terms like a politician. [Laughs.] But at the same time I thought, well, this will at least highlight different elements of the book, or potentially veer of into a tangent that might be interesting or exciting every night.

There's a vulnerable dynamic to having your memories and your life put through different conduits in front of an audience. Do you see that sort of vulnerability as a challenge or even a kind of catharsis in some way?

Not necessarily cathartic. Certainly challenging, and I think there's a sense of value both for me and for the audience that I hope is relayed. Yeah, I'm just really looking forward to it.

Is there a challenge for you in transitioning from the live experience as musician and that as a writer? Both are pretty intimate, but it seems like there'd be a fairly significant disparity between the two. Is one more challenging than the other?

Well, certainly writing the memoir was challenging in terms of the rigor. The process is one of autonomy, and I'm very accustomed to collaborative creative endeavors that if I'm feeling uninspired or any semblance of inertia, I can rely on the energy or acuity of my cohorts to inspire me or push me. You sort of feel like you're joining a fast-moving stream and trying to keep up, which can be very invigorating. I'd say that the memoir is the most difficult, because I was my own worst enemy in terms of procrastination. The ritual of it was completely reliant upon myself and my own willfulness to either write or not write. That was difficult. They all have their challenges, and I like that aspect of it. They all have their moments of frustration and certainly their moments of joy. I guess I relish all of them, but I think writing the book was the hardest.

In your memoir, you make it clear that of all your creative endeavors, music is a sort of refuge for you and especially in your years as an adolescent. Obviously that relationship with music still exists, but does it exist in the same way or functionality for you now as it did when you were younger?

I think it's mutable, and I think that depending on the day or the month or year or context, music takes on a different role, and the kinds of needs one has in terms of wanting to be recognized or understood as a young person, and where and how one seeks salvation changes over time. Now I would describe my relationship to music as one that I feel protective over. I really value it so much, and I'm very appreciative of it, and I'm a very assiduous seeker of new music. It still does occupy what I would consider a sacred space in my life and a deliberate space in that I like to be an active listener of music. I like to immerse myself in albums, and I think there have been a lot of great albums in the last couple of years. Like this year, Kendrick Lamar's album - it's an opus. You can sit within it, and it inspires awe. I like to take my time with music. I don't know if I still do it as a means of salvation in the same youthful sense, but it certainly continues to buoy me if I feel down or to provide a soundtrack for moments that need a sonic accompaniment. Like I said before, I feel protective of that relationship, and I really value and honor it.

You mention Kendrick Lamar, and tying back into your memoir, there's a kind of autobiographical narrative that's become more and more present within music. It would seem like the challenge with creating something like that and have it be impactful would be to avoid crossing that line of self-honesty and awareness and into what's essentially masturbatory or self-indulgent. Is that something you see more and more appealing to you as a listener and as a writer as you've gotten older?

I think Sleater-Kinney was always a band that although not every song was a personal narrative, we never divorced ourselves from the point of view. That kind of unapologetic telling of one's own story no matter how fragile or angry or uncomfortable it was, has been and still is a part of our ethos. I have always valued moments in albums where that story is unsparing and honest. That doesn't mean it can't be artful. I think that doesn't mean it can't have a level of grandeur. For a while that kind of personal songwriting was devalued, that it felt confessional as if the realm of the personal somehow lacked this kind of heightened sense of value. I think now it's really cohering in a way that it's combining not just personal but historical, and that kind of intersection with one's own political and historical narrative I think is really exciting. I think it makes albums feel really relevant. They feel very tactile, and they feel such a part of the fabric. Those I think are the albums that are really motivating people right now. They are a force right now.

photo: Sleater-Kinney at Terminal 5 in February (more by PSquared) 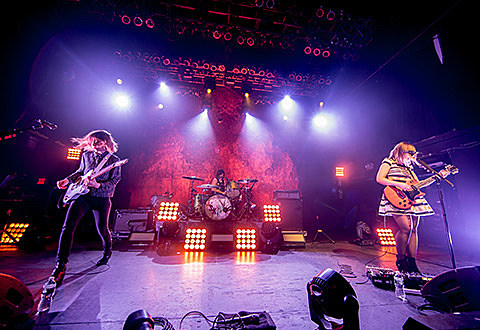 Why do you think that is or what do you see as the sort of reason for that shift in what listeners are looking for in their music?

I think one is that the individual right now is on display everywhere. The chorus of "me" and "I" on social media, in my mind those are really just tiny stages. That starts to feel flimsy in its brevity, and it's also so ephemeral, but I do think it has created a want for stories and for the longform. There's a lot of assumptions that people are reading less, but I think it's created that we're aware of the multitudes right now, and out of the multitudes we seek specificity. There is kind of an awareness of these narratives and these lives that are different but also similar to ours, and I think when people take the time to write about them eloquently, whether in a memoir or on an album, I think they become a companion piece to this sense of communion and community and to a deeper understanding of the world we live in right now which feels fractured in some ways. I think it's a means of creating connection and wholeness and kind of tethering yourself to something that feels familiar and stable. We try to cobble that together with our Twitter feeds or Instagram, but then occasionally it's like you want a little more of a hand to hold, and I think books and records really are those things to grasp. I think it's also a variable of the time we're living in. There's a lot of discord. You can't really look out into the world without somewhat of a sense of despair or skepticism or cynicism at worst. I think people are looking for stories to help explain what it means.

That's something you've heralded not just in rhetoric but in action, and I think that's the majority of the appeal for so many people with what you do with all of your creative endeavors, specifically in the context of feminism and gender equality where the importance of those issues is often overshadowed by the armchair activist, so to speak. Is that sense of rhetoric over action something you see as more prevalent now?

That's a great question. I think that there is a false sense or even a sort of ersatz participation with social media where we can ape action, but it's really stasis or inaction. That's something, and I'm not criticizing other people because it's actually more of a self-examination of realizing and trying to be aware of the difference between movement and action. That at a certain point there has to be a real-life analogue to ideas. Ideology is one thing and participation is another. Yeah, I think it's something to be aware of, and I'd rather examine it in myself than lob critique at others and just make sure that my politics and my desires for change don't end with a click of a "Like" button or starring something or re-tweeting something. Realizing that that's paltry. It's symbolic, but symbolic power and actual power are two different things. As much as symbols and signifiers are important so is living, and I try to aim for the latter. 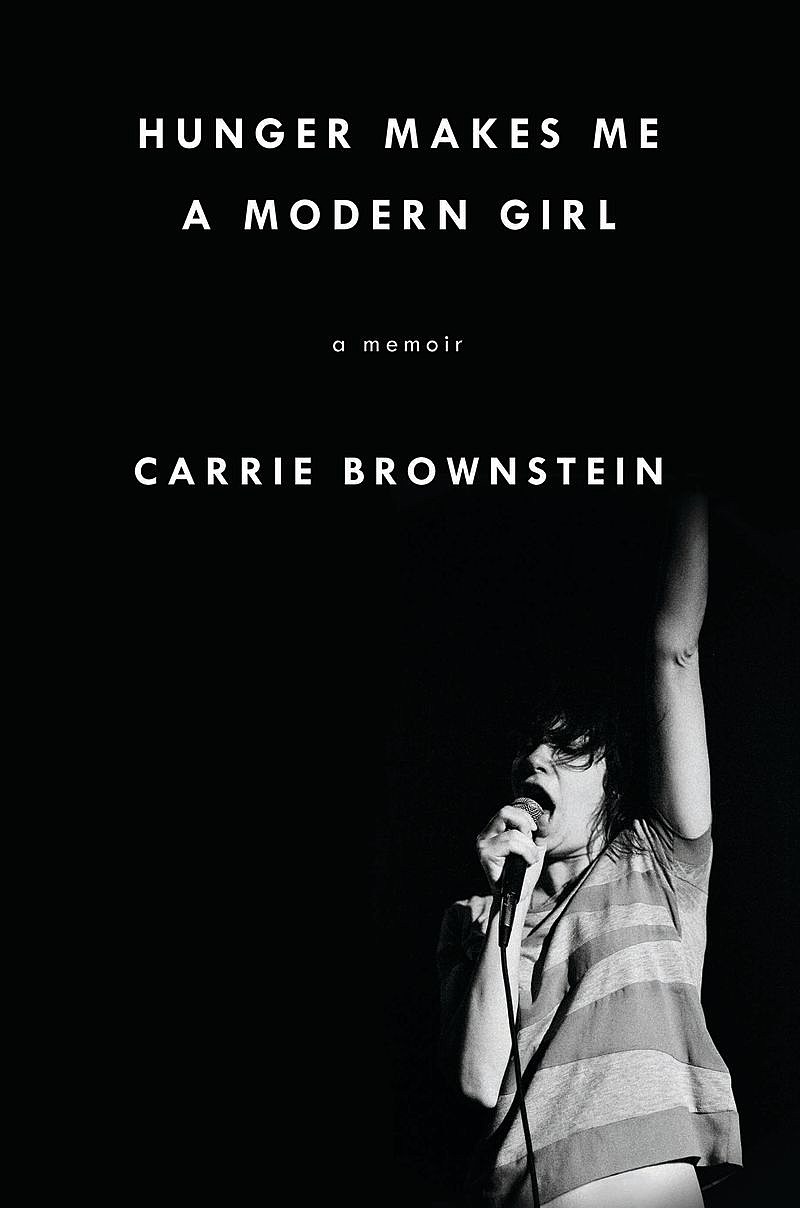