DOWNLOAD: Aaron Dessner - We Were Born (from the Long Count) (MP3) 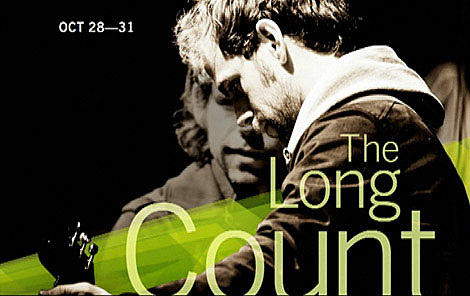 In an inspired collision of creative worlds, three inexhaustibly original artists--brothers Bryce Dessner and Aaron Dessner of indie rock royalty The National and omnivorous visual art phenomenon Matthew Ritchie--combine talents to create a song-filled myth about the beginning of time. A feast of images, instrumentals, and songs thick with primordial mystery, The Long Count pairs Ritchie's protean forms with a twelve-piece orchestra and the Dessners' gothic mix of electric and orchestral sounds.

Guest vocalists Kim and Kelley Deal (The Breeders [who are at the Bowery August 18th & 19th]), Shara Worden (My Brightest Diamond), and Matt Berninger (The National) round out the line-up in this visionary collaboration between music and art.

The MP3 above is the first musical glimpse at the above-described (and previously mentioned) Long Count project. The heavy minimalist influence on the track makes the role of those guest vocalists even more curious. Single tickets for the Long Count, and all the BAM Next Wave concerts, go on sale September 8th. A video trailer for the show, which falls on and around Halloween, is below. More Brooklyn Halloween show options HERE.

Shara Worden has been keeping super busy and impressing Decemberists audiences across the country when she sings her part in the Hazards of Love production (and when she's doing Bob Dylan). Upcoming Decemberists dates include September 21st in Montclair, NJ.

Kim Deal, in addition to the above-mentioned BAM and Bowery shows, will be in NYC (and around the country) with the Pixies in November. The shows at Hammerstein Ballroom are now on sale.

The National recently played a set at All Points West in Jersey City.

Worden/National collaborator Sufjan Stevens premiered his show "The BQE" as part of BAM's Next Wave Festival in 2007. That show is being released as a DVD and going on tour, as is Sufjan himself.

Also below is a video from "a 20-minute animated and musical collaboration developed by Bryce Dessner and Matthew Ritchie" that premiered at the Kitchen in March (Sufjan Stevens played the harmonium), and trailers and music (!) for the other BAM Next Wave commissions including Imaginary City (the So Percussion show), Terra Nova (the DJ Spooky/ICE collaboration) and Meredith Monk's Songs of Ascension...

"Raphael" is a 20-minute animated and musical collaboration developed by Bryce Dessner and Matthew Ritchie. It will also be exhibited in 2008 as a part of "The Morning Line", commissioned by Thyssen Bornemisza Art Contemporary. Animator: Nick Roth.