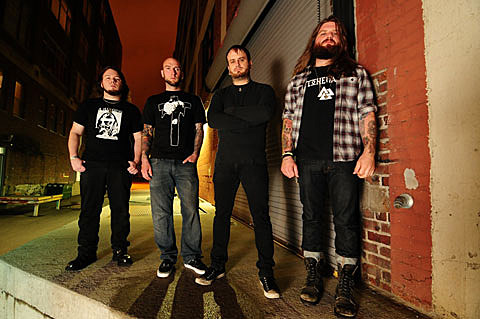 Minneapolis's Wolvhammer can't decide what they are, and that's the best part. Black Metal? Post-metal? Crust? Sludge-doom? Wolvhammer chooses it all.

Its that kitchen sink mentality - nothing is off limits, that makes the band's debut album Blackmarketeers Of World War III such a compelling listen. The LP's lead track, "Suicide Brigade", is a perfect example; beginning with a blasting black metal intro, the song evolves into a half speed Hellhammer style punk groove before slowing entirely to a doom piece by the halfway point. It rips, and more importantly underlines a key point: with barely two years in existence, Wolvhammer has an identity and a sound all their own.

With Blackmarketeers Of World War III due via Init Records on July 13th (yet currently available via their mail order), we sat down with bassist Micah Leonetti to discuss the origins of the band, Minneapolis, and the new LP. Get the MP3 above. Read our chat below... 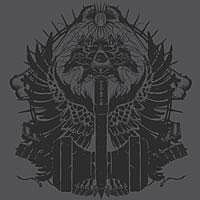 Crash course: Who is Wolvhammer?

Wolvhammer was started in late 2008 as an idea between Heath Rave and myself. We had been focusing on a doom project (Vernal Pool) for about a year and simply realized that we wanted to go back to playing fast, pissed off, heavy music. We decided on a name and focused our attention on finding a singer and guitarist. After adding Ryan McKern in early '09 we quickly wrote a couple dozen songs and recorded two EPs. We had been thinking about a second guitar player but were not pursuing anything due to being quite content as a 3 piece. However when Andy Schoengrund approached us about 6 months ago and expressed interest in playing with us, we knew right away that he was our guy.

We, as individuals, are involved in multiple other projects including (but not limited to) Empires, the Guilt of, and the currently on life support Vernal Pool.

Blackmarketeers Of World War III is your debut LP. What were your goals going into the release after completion of the previous EPs?

After completing Dawn of the 4th we knew we had something special. This wasn't fucking child's play anymore. This was the band that Heath and I had set out to create.

Our goal was simple: record as much as we can and ride this train as far as it takes us.

Black Marketeers is simply chapter one. The EPs were a solid prologue but BMWWIII is something we are truly excited about. Most bands out there don't make it half as far as we've made it. If we can continue to make music that pleases us and happens to catch the attention of a few others along the way, I will be content.

Wolvhammer is for us and only us. If other people like it, great. If they don't, I couldn't give a shit.

How did you arrive at Sanford Parker for the production? Are specific hallmarks of his sound that lead you to him?

Honestly, Sanford was a no-brainer. There are very few engineers/producers working in heavy music currently that we want to work with; Sanford was/is at the top of that list.

If you look at the bands he has recorded (Lair of the Minotaur, Nachtmystium, Yakuza, Minsk, Rwake, Twilight etc. etc.) you can clearly see why we decided on him.

It also helps that he is one of the most down to earth guys I've ever met and a fellow (albeit relocated) midwesterner.

It is easy to see why he is one of the elite engineers and producers in modern heavy music.

Minneapolis seems to be a bit of a haven for forward-thinking music in the region, what with it's storied past of great bands... Husker Du, Replacements, Cows, Disembodied, too many to name... How would you describe the heavy music scene in the twin cities? What about your region?

This is a good fucking question. I think the right people know how good of a scene Minneapolis has but it frequently is overlooked by the masses.

The current state of the scene in Minneapolis is a strange one. I feel like we are in a transition. For the better part of the 2000s, save for a few bands (see: Disembodied), Minneapolis was chasing trends.

Whether it be Swedish death metal, metalcore, doom, or most recently post metal, for a decade now the scene has been in a state of apathy and listlessness.

As of late however, I see a change. I see bands branching out and trying new things. I see dudes not giving a fuck and going back to their roots. We have had an explosion (granted, so has the rest of the country) of good, real, hardcore bands. There are amazing grind, black metal, and (real) sludge bands popping up. And this applies to our neighbors in North Dakota, Wisconsin, Illinois and beyond.

I'm excited for what's happening in Minneapolis and the surrounding area. 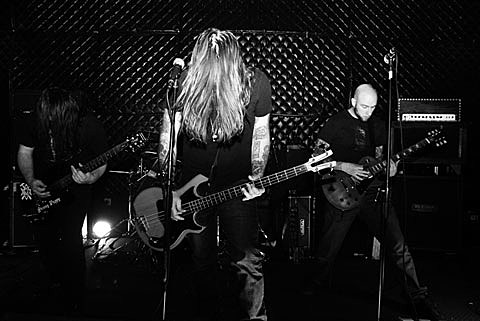 Any plans for a larger tour in the coming months?

Absolutely. Always. We have tons of plans.

I can say that we just got back from a short stint with KEN Mode... and considering how awesome it was working with and playing with those guys, we will more than likely be out with them again in the near future.

We've been talking to our friends in the Atlas Moth about getting out and doing some shows together, which would be quite a killer billing.

We have quite a few things "in the works" as they say and will be sure to let you know as soon as we have concrete news to report.

Thanks Micah, Kim, and Wolvhammer!