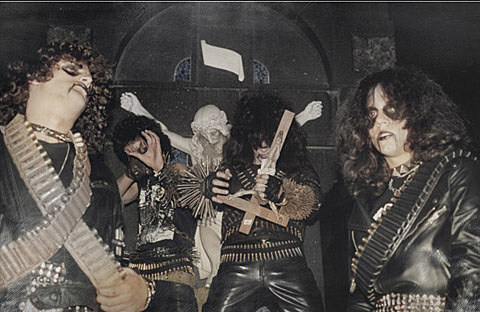 Brazil black thrashing maniacs Sarcofago are a band that, to extreme metal fans at least, warrants no introduction. To bring the rest of you up to speed: formed in 1985 when the members were still in their teens, the band went on to release a handful of classic albums (perhaps most famously 1987's I.N.R.I.) and serve as a gigantic influence on black metal's sound, aesthetics, and attitude. Their last official release, the Crust EP, was released back in 2000, and since then, things have been quiet in the Sarcofago camp. When news began to circulate that an officially-sanctioned reissue of 1995's seminal compilation Decade of Decay was due to be released in North America by Greyhaze Records (in association with Cogumelo), it was, to say the least, a big fucking deal.

When Wagner Antichrist, founding member and legend in his own right, agreed to do an interview, it was (to me at least) an even bigger fucking deal. Check out a few choice words (and more Sarcofago news!) from the man himself below. 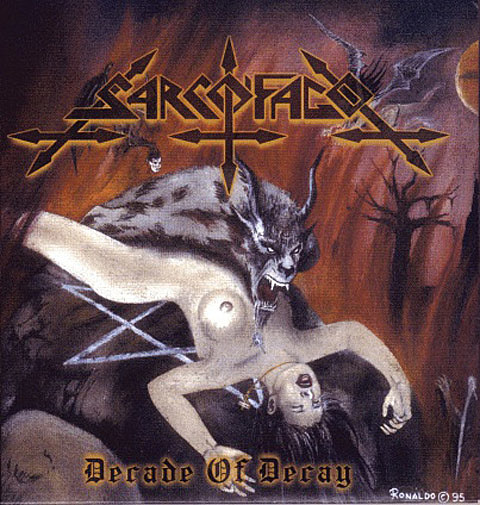 Decade of Decay will be reissued on CD and in a special double LP edition by Cogumelo/Greyhaze Records, for its first-ever North American release! What made you decide to allow this reissue to happen, after all these years?

Wagner Antichrist: Well, I think that some sick maniacs are still interested in our noisy stuff, so let them get it!

What went into the creation of this reissue? It must have been a very delicate, time-consuming process. It's been said that the package includes exclusive rare photos and demo tracks; what can we expect to see and hear?

Yes, there is some interesting and rare noise in this release. As a matter of fact, Die Hard SARCOFAGO fans will get some real bad news in the months and years ahead when it comes to Sarcofago! This shit thing called SARCOFAGO refuses to DIE!!! Ha ha ha...

Are there more Sarcofago reissues on the way?

YES. Look out for some more disgusting releases coming soon!

Whenever a legendary band releases something after a long hiatus, people will immediately start wondering - will we ever hear new material?

Are you currently involved in any musical projects? The last project of yours that was mentioned was Kommando Kaos. Is that band still active?

KOMANDO KAOS is a Hardcore band in the vein of the Finnish and English bands like RATTUS, KAAOS, DISCHARGE, TERVETT KADETT, and CRUDE SS. It's a living-dead band, ha ha. We rehearse once every 6 months. The vocalist lives in a distant city . Well, for other projects? Ha ha ha.... Who knows... 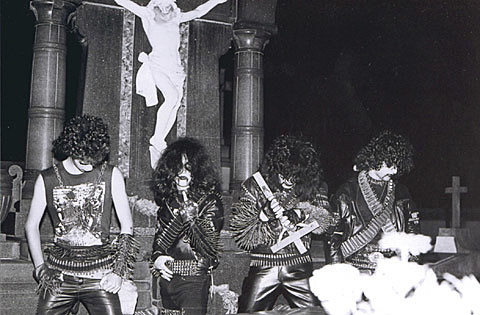 I know that various former members of the band have gone on to play Sarcofago tribute shows, and there have been a variety of bootlegs surfacing after your last studio release (2000's Crust EP). Do you have any contact with Gerald Incubus or Eugenio, or any other past members for that matter?

All of us have different lives and ways nowadays. But when it comes to SARCOFAGO, we had something that made us different from other bands that I know, and that was friendship. It was always the first thing in order to be in the band, not the "business!" We did everything we did for fun. Business kills real feelings and real music! To be in it and treat it like a business is the first step to do FALSE METAL! I still have contact with some of the guys, but some of them are missing... (Lucio Olliver, where are you brother??), ha ha ha!

Is Sarcofago truly dead? What would it take for you to participate in a Sarcofago reunion gig?

If the guys that recorded I.N.R.I. accepted to play I also would. No other line-up interests me or should be called SARCOFAGO. I like all the guys that played in the other records, but the REAL SARCOFAGO SPIRIT was in those four who recorded I.N.R.I.! The brothers ZEDER BUTCHER (guitars) and EDUARDO D.D.CRAZY (drums) are two geniuses that I had the great pleasure of knowing, be real friend and play together with. There are a lot of bands here that includes brothers in their line-up, but there's no other brothers in the Brazilian metal scene that can be compared in terms of CREATIVITY, ORIGINALITY, FRIENDSHIP and SAVAGERY than these two. If they are in, I'm in too... if they are out, I'm out too... SARCOFAGO fans don't deserve any less than the REAL THING!

"Fuck Off The Melodic Black Metal" was an oddly prescient song - it's just as fitting a sentiment now as when it was first penned. What do you think of the style of progressive, experimental, atmospheric "black metal" that has become so popular as of late??

IT'S NOT BLACK METAL! It's commercial shit for kids and Marilyn Manson kind of fans. If you want to hear keyboards played in the real and creepy way, then listen to ABYSMAL GRIEF, ACID WITCH or even FLESHGOD APOCALYPSE. The rest are just love songs for suckers. 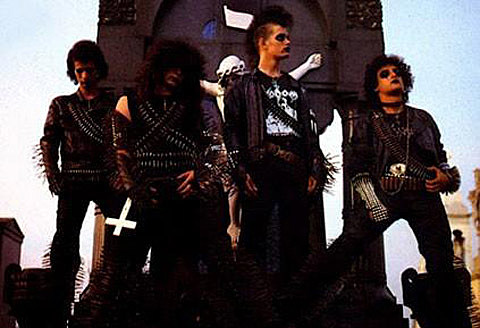 In your opinion as one of the genre's forefathers, do you think that black metal - or extreme metal in general - can exist without Satan?

YES! OF COURSE! I don't give a shit for any kind of religion, including Satanism. The fact is that all of them have manipulation and expropriation of poor and ignorant people as their only goal. Satan is only a symbol created by religion to put fear in the weak minds and capture idiots into their flock so they can steal their money! Satan is as real as Santa Claus, or aliens. Well, life outside our planet probably exists, but Satan? Give me a break! It might seem strange to hear me saying this when I wrote songs like SATANAS, SATANIC LUST or DESECRATION OF VIRGIN. But the truth is that at that time, saying that Satan was raping the Virgin Mary or pissing in the corpse of Christ was the best way to show our hate and disgust for religion and all the shit that came along with it. Having said that, there are some better and more disgusting ways to make and write Black Metal without talking about Satan. Satan is not real, but evil is very real. You only need to see WAR, POLITICS, DRUGS and PREACHERS and other similar institutions to see how REAL evil is, was and always will be, whenever the maggots known as human beings are involved.

SATAN has nothing to do with this, but MEN do.