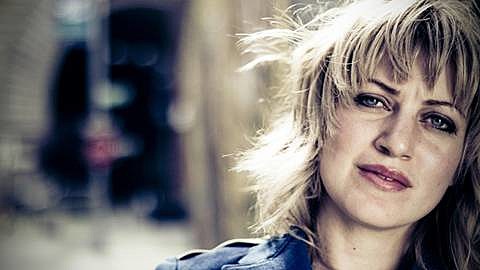 Anais Mitchell was just in NYC to open the first two nights on Bon Iver's four-night run at Radio City (review of night 3 is HERE, pics of his post-Radio City show with Frank Ocean are HERE). She's got a few duo shows with Michael Chorney this week into next, and in late November she'll kick off a headlining tour which brings her back to NYC for a show at Bowery Ballroom on December 3 with Cuddle Magic, who also open other dates on the tour. Tickets for that show are on sale now. All dates are listed below.

You can also catch Cuddle Magic in NYC when they open for Larkin Grimm at Rockwood Music Hall on October 8, an early show before Holly Golightly plays the venue.

Anais Mitchell released her new album, Young Man In America, earlier this year, the followup to 2010's Hadestown, a folk opera which featured a significant amount of guest vocals from Justin Vernon and other singers. The video for "Coming Down" from that album and a list of all dates are below.