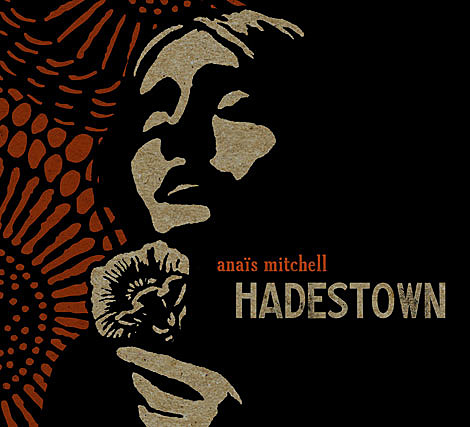 Speaking of The Low Anthem, The Low Anthem's Ben Knox Miller recently joined Justin Vernon (Bon Iver), Greg Brown, Ani DiFranco, and Petra, Rachel, and Tanya Haden to play on the new record by Anais Mitchell, Hadestown, which is due out March 9th on Righteous Babe. The record is a concept album about the Greek myth of Orpheus & Euridice, and each of those singers plays a role...

Hadestown began its existence in 2006 as a live "folk opera" that the Vermont-based singer/songwriter created in collaboration with director Ben t. Matchstick (Bread & Puppet Theater) and arranger/orchestrator Michael Chorney. After loading the sets and the 22-member cast of Vermont performers into a former circus bus and touring New England during "full-on winter," it was time to rework a few songs. Next, Mitchell called upon a few fellow musicians to lend their voices to a recorded version--not a cast album, but a stand-alone, self-contained song cycle. The result is a veritable Who's Who of modern indie folk/rock: Justin Vernon of Bon Iver plays Orpheus; Greg Brown is Hades, Lord of the Underworld ("king of the kingdom of dirt"); and Ani DiFranco plays Hades' strong-willed, subversive wife, Persephone. Also on hand in smaller roles are the Haden Triplets (Petra, Rachel, and Tanya) as the Greek-chorus-like Fates and Ben Knox Miller of The Low Anthem as the messenger Hermes. Mitchell herself sings the part of Eurydice, the character whose (metaphoric) death propels Orpheus into "Hadestown."

The album's cover art is above along with two songs from the new album, one of which features Justin. Full tracklist below.

In other Justin Vernon collaboration news, he recently performed live with St. Vincent two times (one, two) in NYC, and one of his Bon Iver songs is covered on the new Peter Gabriel album.

Anais's upcoming shows include an April 23rd show at Joe's Pub billed as "Anais Mitchell & the Hadestown Orchestra". Tickets are on sale. All dates and a video of Anais performing with Justin, below...