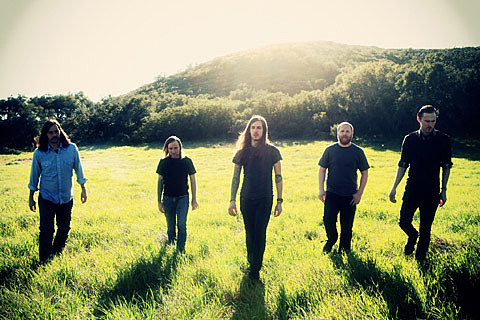 After expansive releases like Of Sound Mind lit up the critical press in 2009 (we posted a track back then), Ancestors retreated back into their riff cave to further their progressive vision for their new release. The result is the Invisible White EP, a 29 minute progressive odyssey that borrows elements from 70s fuzz, Pink Floyd, Yes, and plays like a pensive soundtrack in a room full of ganja smoke. Check out the epic EP closer "Epilogue" which makes its debut in this post, streaming below. Look for the release on Tuesday (6/21) via Tee Pee.

Ancestors currently have just one day on their calendar, and that's tonight (6/17) at Three of Clubs in LA. Sister band Night Horse have no dates at all. We'll let you know if that changes.

Meanwhile Night Horse vocalist Sam Van Velde will see the release of the three album discography from his prior pastime, Bluebird. The LA band will see the reissue of said material via Tee Pee on August 13th. The triple album, entitled Saguaro (1995-2003), will feature 2003's Hot Blood, 2000's The Two and 1999's High Atmosphere EP along with "various singles and compilation tracks".

Song stream, and some video is below.