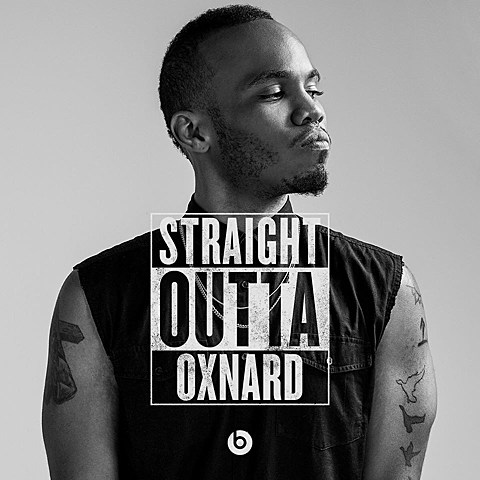 It took him 16 years, but this past Friday Dr. Dre put out his third album, Compton, and it's way better than a Dr. Dre album in 2015 seemed like it would be. There's a lot of great stuff on there, and it's the type of album that demands (and deserves) repeated listens to soak it all in. As you might expect from a Dre album, it's got a bunch of his famous friends -- Kendrick Lamar is not surprisingly one of the biggest stars of this thing (maybe the biggest) and Snoop Dogg raps with a fire that's been missing from his recent funk and reggae excursions -- but also some newcomers. One of the more impressive new guests who's all over this album is Oxnard, California singer Anderson .Paak. He sings a lot of the hooks (and does the devastating "I can't breathe" part of "Deep Water"), including "Animals," Dre's first-ever collaboration with the equally-legendary producer DJ Premier. Premo spoke to Billboard about that song came to be:

When the whole Freddie Gray thing happened in Baltimore, Anderson called me and was like, "I'm real angry with what's going on with the police, and I just wrote a song to that other beat. I want to sent it to you and see what you think -- maybe we could leak it out, put it out in the streets and show that we're angry too."

When he sent it to me it was called "F.S.U." -- F--- Shit Up. In the hook he's saying, "Don't come around these parts, the whole world thinks we're animals/ The only way they want to turn the cameras on is when we're f---ing shit up." When he said that, I was like, "Yo that's dope." Anderson just happened to be going to a meeting with Dre -- he had already done a few songs with him, through their management. Anderson's from the West Coast as well.

When he told him he had a record with Premier that he did in Moscow, Dre said, "Let me hear it." Once he played it for him, [Dre] called right away and said, "Yo, I want to do this song for my soundtrack. I decided to do a soundtrack album last minute, and I want to put it out with the movie."

I said, "What do you want to do?" And he said, "I want to put a verse on it." Like, shit, Dre rapping on a verse? Hell yeah. The song was already done, and I explained how it came about with BMB Spacekid. He said, "I'll spit the verse and let you hear it and make sure you're cool with it, and if so let's add on to it. Come out to L.A. and we can add on a few more things to it."

...[Dre] showed me [Straight Outta Compton] in the studio, so I got to feel the whole energy of the movie. He had already said that the 1992 riots, with everything going on with the police after the Rodney King beating, was totally in that same vein as Anderson .Paak's lyrics. His verse is about the same thing: Why the f--- are they hassling me? They're harassing us and doing all this stuff, so it's still relevant to this day with how we're being treated.

He said, "All I'm going to do is change the title, from 'F.S.U.' to 'Animals,'" because that's what Anderson says in the hook.

On that trip to Moscow, Premier and Anderson had also collaborated on the song "Til It's Done," which features Russian artist BMB Spacekid. Listen to that below.

Anderson is also one half of the Stones Throw-signed duo NxWorries with the producer Knxwledge. So far their only release is this year's "Suede" single, which you can also hear below. NxWorries are heading out on the road later this month to open the rescheduled Earl Sweatshirt tour, which also includes Remy Banks.

The tour hits NYC on August 22 at Best Buy Theater. Tickets for that show are still available. All dates are listed below.

Earl's initial tour dates had Vince Staples opening, but he isn't on the rescheduled dates. He does, however, play a BrooklynVegan-presented NYC show tonight (8/10).

Anderson also has a handful of solo releases out (some under the name Breezy Lovejoy) and other notable collaborations, including TOKiMONSTA's 2014 single "Realla" and another Stones Throw artist, Jonwayne's song "Green Light" off this year's Jonwayne Is Retired EP. You can stream those, and his most recent solo single "Switch-Up," below. 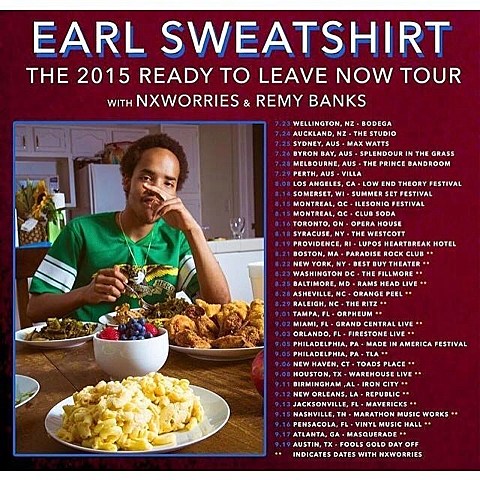