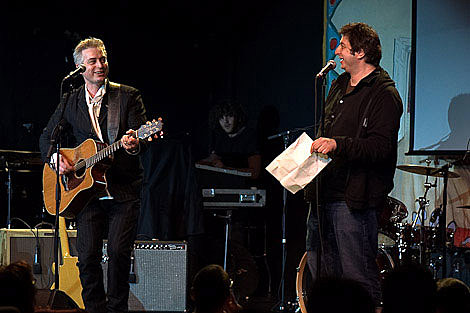 Novelist/singer-songwriter John Wesley Harding brings his Cabinet of Wonders back to City Winery on March 11th. Joining him in his quest for the perfect variety show will be an all-star lineup featuring Andrew Bird, David Wax Museum, Paul Muldoon, Tift Merritt, Daniel Felsenfeld & The Jessold Consort, Eugene Mirman, JWH, Jonathan Coe and Kristin Hersh. A little more than a month later, he'll do it again with another show at City Winery on April 22, this time featuring "Rick Moody, Eugene Mirman & more". More details on that one TBA.

In between (and before) those dates, John Wesley Harding AKA Wesley Stace will do readings in and around the area, including one on 3/10 at Book Court in Brooklyn and one on 3/17 as part of a panel at LIO in Brooklyn. He'll be speaking about Charles Jessold, Considered as a Murderer, his new book. Maybe you read about it in the New York Times:

WESLEY STACE'S new book, "Charles Jessold, Considered as a Murderer," is both a murder mystery and a novel about classical music, with a character who sometimes assumes another identity. Mr. Stace, an enthusiastic, donnish Englishman with an honors degree in English literature from Jesus College, Cambridge, and a head stuffed full of historical trivia, is an expert on both double lives and music. Improbably, he is also John Wesley Harding, an Elvis Costello-like singer-songwriter and folk rocker who has released more than a dozen records and is cool enough to have enlisted most of the Decemberists as the backup band on a forthcoming album.

Eugene Mirman talks with Stace about the book in a video you can watch below. Eugene Mirman can also be found at Union Hall in Brooklyn this Sunday, 3/6.

The David Wax Museum, who recently played their own show at City Winery (and who are part of John Wesley's Cabinet on 3/11), will also be at SXSW where you'll be able to catch them at a BrooklynVegan day party right at noon on Friday, 3/18 at Barbarella on Red River. Stay tuned for more details on that party coming shortly (but I can say it is the same one Middle Brother is playing later in the day). More David Wax dates at their website.

All Stace & Andrew Bird dates are below...

--
Eugene Mirman talks with Wesley Stace about Charles Jessold, Considered as a Murderer