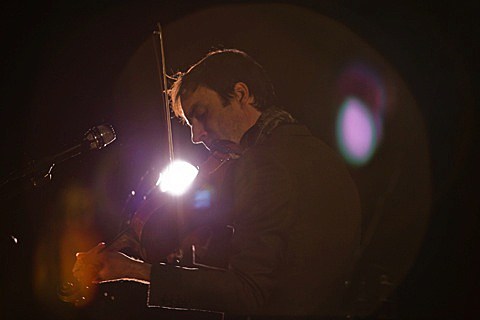 Andrew Bird has included Handsome Family covers in his sets for years now and is now releasing an album of Handsome Family songs titled Things are Really Great Here, Sort Of which will be out digitally June 3 and on vinyl later this summer. The album includes a cover of "Far From Any Road," which was the theme song to HBO's hit series True Detective.

With his band Hands of Glory (which includes Tift Merritt), Bird will be on tour for much of the summer, including the WNYC Radio Love Fest at BAM's Harvey Theater on June 6 ( a few tickets still left), and a free show at Central Park Summerstage on July 8. Right after the BAM show, Andrew Bird will play Rough Trade on June 7 with two performances (7 PM & 10:30 PM). Tickets for the Rough Trade shows go on sale Friday (5/16) at noon. But if you'd like to go for free, we're giving away a pair of of tickets to both Rough Trade performances.

All Andrew Bird tour dates are listed, along with contest details, below...

======================
For a chance at winning a pair of tickets to see ANDREW BIRD AT ROUGH TRADE: either tweet something that includes both @BrooklynVegan AND "ANDREW BIRD at ROUGH TRADE" and "early show" or "late show" in the tweet, or send an email to BVCONTESTS@HOTMAIL.COM with the subject line "ANDREW BIRD". Include your first and last name in the email and please indicate whether you want to go to the early or late show. We'll pick a winner at random and contact them with more details. If you enter by email, it will not be shared with anyone else. Good luck!
======================