Andrew Bird at RIverside Church in 2012 (more by Dominick Mastrangelo) 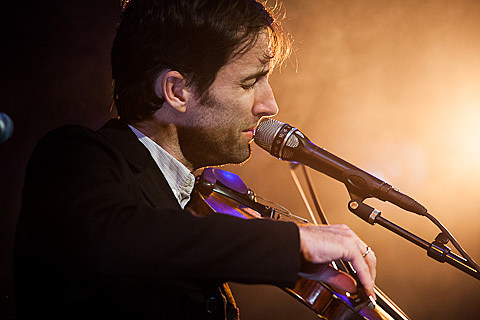 Singer/songwriter/violin looper Andrew Bird is going on a tour this summer with his new band The Hands of Glory, "an old timey acoustic configuration featuring Tift Merritt, Alan Hampton, Bowl of Fire alumnus Kevin O'Donnell, and Eric Heywood on pedal steel." That tour hits NYC for a free show at Central Park Summerstage on July 8 with Here We Go Magic singer Luke Temple. That show starts at 7 PM. All dates are listed below.

Andrew Bird will play NYC sooner than that though for RadioLoveFest, "a vibrant cross-section of genres and formats from storytelling, to music, to conversation," which runs from June 4-8 at BAM. Andrew appears on June 6 at the BAM Harvey Theater. Details:

The two-time Peabody Award-winning Studio 360 with Kurt Andersen, from PRI and WNYC, is public radio's smart and surprising guide to what's happening in pop culture and the arts. Each week, Andersen, novelist, journalist, and co-founder of legendary Spy magazine, gets inside the creative mind, introducing listeners to the people who are creating and shaping our culture on movie sets, in galleries, and on the internet.

At BAM, Andersen presents an evening of music and conversation featuring Andrew Bird, one of the most acclaimed and inventive songwriters in indie music, and Jennifer Egan, whose novel A Visit from the Goon Squad won the Pulitzer Prize.

Other highlights include a screening of Talking Heads film Stop Making Sense on June 5 in the BAM Rose Cinemas with a Q&A with director Jonathan Demme and WNYC's Brian Lehrer; NYC/WNYC's Ask Me Another show on June 6 at the BAM Howard Gilman Opera House with They Might Be Giants and house musician Jonathan Coulton; and WNYC"s Soundcheck on June 7 at BAM Harvey Theater with The Walkmen frontman (and now solo artist) Hamilton Leithauser.

Tickets for all RadioLoveFest shows are on sale now or will be on sale soon.

Full RadioLoveFest schedule, with the list of Andrew Bird tour dates, below...

6/5 - Voices Carry: Stories of Inside Frequencies - The Moth Radio Hour Live w/ Storytellers, Al Letson, among others at BAMcafe

* with the Hands of Glory
@ with Caetano Veloso & Devendra Banhart