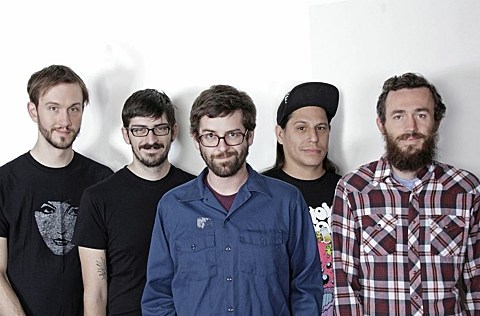 Andrew Jackson Jihad put out their fifth album, Christmas Island, via their new label home of SideOneDummy (Gogol Bordello, Gaslight Anthem) this past May, and earlier this month they kicked off their tour with Cheap Girls. That hits NYC on Saturday (6/14) at Le Poisson Rouge with Dogbreth (tickets) and the next day they'll play a free in-store at Rough Trade NYC (6/15) at 2 PM. No wristband required, and the band will be signing any copies of Christmas Island purchased that day. Updated dates are listed below.

AJJ also recently performed the new album in full at the SideOneDummy offices. We've got the premiere of their performance of "Do, Re, and Me" which includes singer Sean Bonnette singing into a bouquet of flowers. The new record is a bit softer than its revved-up predecessor, 2011's Knife Man, and "Do, Re, and Me" is especially one that really falls closer to just "folk" than "folk punk." It's a cool video and you can check it out below.

A few weeks before the new album came out, I spoke with Sean about the new record, this tour, past tours (including one where they were pulled over four times on one day in three different European countries), and more. You can read that interview, along with the video and updated list of tour dates, below...

Andrew Jackson Jihad - "Do, Re, and Me" Live From SideOneDummy

BV: Christmas Island feels comparatively softer and folkier to me than your last album which felt like some of your most electric, punk stuff yet. What inspired the shift in sound?

AJJ: We initially imagined this record as a full electric rock album, but John Congleton, our producer, had a much different and way better idea. He wanted to have us make a brutal acoustic record, similar to the Violent Femmes' first album.
There are definitely some soft songs on this record, but there are also some really overdriven ones. Te try to be well rounded, i think.

BV: I agree that it's a well rounded record, and now that you say the Violent Femmes thing I can totally hear that. That album is pretty aggressive without really being "aggressive."

AJJ: Thanks! This record is sort of a return to how we started in that regard. I personally think the sound of an acoustic guitar being strummed really hard is heavy, like in David Bowies earlier records. Songs like "Quicksand" or the acoustics in "Space Oddity."

BV: Totally. So working with John Congleton worked out well for you guys then?

AJJ: Hell yeah. He's a master. I can't wait to record with him again.

BV: The new record is your first with SideOneDummy after years with Asian Man. How's working with them been?

AJJ: They're great! They are incredibly nice people, which is a huge prerequisite for us. I love how they operate, they are a true team. I feel like they really understand our band. It was their idea to make snuggies and skateboards for the preorders, which is totally something silly we would have thought of. Or could have thought of, I mean.

BV: What made you decide it was time for a new label?

AJJ: Mike Park's been trying to get us to move out of mom's house for a few albums now (jokes). We've always been open to working with other labels and had talked with a few, but SideOne won our hearts. We were down to try something new that would get the record to a few more people's ears ultimately. Mike Park from Asian Man was very excited to have us go to SideOne, which feels good.

BV: That's good that it was on good terms.

AJJ: Totally. Mike is a great person. He isn't interested in making boatloads of money off of his bands, he likes to get them to his ceiling and send them off to bigger things.

BV: So for the new album, where did the title Christmas Island come from? I got fooled into thinking it was a Christmas album for a second when I first saw it.

AJJ: All I can really say is that it's worth a Google. There are a couple of clues at the end of the album.

BV: Of al the songs on this one, "I Wanna Rock Out In My Dreams" sticks out to me the most lyrically, maybe because I like the image in my mind of someone playing air guitar with a Flying V as they're sleeping. What was the inspiration behind that one?

AJJ: I'm not really sure where that one came from, that's probably the oldest song on Christmas Island. I wrote it with a cheesy 3 piece rock band in mind. Sometimes I like to write songs that aren't for AJJ, it frees me up to think outside of any imaginary constructs I've built up in my head for the band. "I Wanna Rock Out in My Dreams" is one of those, for sure.

BV: So you're about to tour with Cheap Girls, who you've played with before. I take it you have a good relationship with those guys?

AJJ: I love Cheap Girls. They are some of my best friends. Ian and Adam and I are going to see The Hold Steady and Deer Tick tonight, actually! I've been living in their home town of Lansing, MI for about two years now.

BV: Oh, so AJJ isn't based in Phoenix anymore?

AJJ: We are, but I live in Michigan for most of the year. When we tour I fly back early to practice and catch up with loved ones.

BV: Speaking of tour, what's one of your craziest tour stories?

AJJ: The most recent one I can think of was on our last European tour. We got pulled over 4 times in 1 day in 3 different countries; Once in Germany, twice in the Czech Republic, and once in Austria. The first Czech police officer asked if we had any drugs, and we honestly said no. He then asked if we had ever done drugs, and we said no again. He then said "That. Is not. The truth." Then he let us go.

BV: Ha that is insane.

AJJ: It was oddly fun!

BV: If you could tour opening for anyone, alive or dead, who would it be?

BV: Last question, what newer bands have you been listening to lately?

AJJ: I love this question! Perfume Genius, John Maus, Suicide (new for me, at least), Treasure Fleet, Danny Brown, lots more. I also hate this question because I leave a bunch of artists out. It's like going into a record store and forgetting what you want to buy.